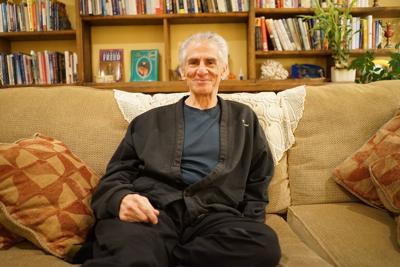 To enter Dean Corcoran’s office, situated on the second floor of 364 Railroad Street, in St. Johnsbury, is like entering another world. While the streets below buzz with the life of shoppers and drivers navigating the three-way intersection, Corcoran’s waiting room is quiet, still, and lighted softly. A 10-gallon fish tank gurgles at the far end of the room as eight small, brightly colored fish swim circles around a tiny ceramic replica of Spongebob’s pineapple house. One of Chopin’s Nocturnes plays softly on the stereo. The subtle scent of cinnamon, or nutmeg, floats in the air. On the coffee table, a book entitled “Don’t Forget to Sing in the Lifeboats,” is conspicuously placed.

Though this waiting room also sees its share of daily traffic, as people pass through seeking everything from counseling to yoga lessons, it is serene. Corcoran provides both services and he’s as in demand as ever. But it took a lot of work, and it isn’t all his doing, he says. He found a lot of help, and lessons, in unexpected places along the way.

“I guess today, I’ll do all the talking,” he says, settling onto a couch in a south-facing room usually reserved for therapy. This room is just as peaceful as the waiting room. The west wall is lined with books, the south wall, with windows. Though it’s not quite 5 p.m., it’s already dark outside. Two couches and a loveseat create a u-formation. Boxes of tissue are conspicuously placed on the floor, a few feet from each other. Corcoran’s black wheeled office chair sits in the middle, empty. Usually, Corcoran, who’s 64, would be sitting in that chair, while the client would sit on the couch. This time, he’s sitting on the couch.

When asked about how he became a counselor, he smiled.

“My career as a counselor began when I owned a restaurant in Brockton, Massachusetts,” he says. “I wasn’t doing a whole lot of cooking, that’s for sure. I was spending most of my time mediating conflicts, trying to keep people who were struggling with substance abuse from imploding, trying to keep the restaurant alive.”

While the people around him were facing tough challenges, Corcoran was wrestling with his own. He wasn’t happy in the restaurant business and his first marriage was failing. He felt he had to go, but he didn’t know where, yet.

“I used to hire musicians to play in the lounge,” he says. “One of the duos I hired became my good friends and they had transplanted from the Brockton area to Barnet, where the man’s father had retired. They invited me to visit and I thought, why am I living in Brockton?”

After that visit, Corcoran decided to take a leap of faith. At 32, Corcoran and his first wife parted, amicably. He sold his restaurant, moved to Barnet, and took a couple of years off to figure out what he wanted to do.

“Eventually, I decided to do drug and alcohol counseling,” he says.

When asked what kind of training counselors must undergo, the obvious response is, one sanctioned by experienced professionals in the fields of mental and physical health. But maybe a lesser-known path is walking through the fire oneself.

“Most therapists had a rough go of life at some point,” he says. “I’m on the low-end of things. But I started drinking - hard - when I was 15, and didn’t lay off till I was 27. That’s probably the biggest factor in my becoming an alcohol and drug counselor.”

Corcoran explained how those who have struggled with substance abuse have a kind of understanding of one another, born of a tangled knot of shared experiences, which makes it possible to offer guidance in a nonjudgmental way. He was eventually licensed as a mental health counselor, and a drug and alcohol counselor. Two separate licenses in Vermont, he points out.

“Then, I got a job at Northeast Vermont Regional Hospital,” he says. “This was around 1991.”

At the time, he had no intention of going into private practice. “I loved my job at the hospital,” he says. But after two and a half years, he opened an office, where he could practice privately. A good thing, too, because life was about to throw Corcoran a curveball.

“I didn’t factor into my plan that I would be fired from the hospital five months after opening my own office. That accelerated my private practice project.”

Corcoran said he was fired because he mouthed off to the wrong guy - his boss.

“I was in a meeting, and I grew frustrated with what was being said,” he says. “I got up and walked out. I thought I was so good at my job, that I could get away with it. Not true.”

He laughs, here, looking out the windows as though he sees this episode from 1993 playing just outside.

The effects of being fired didn’t hit Corcoran until the next day. On his way out of the hospital, his friends and co-workers joked with him as they passed each other in the hall, as they always had.

“Everybody knew I was a kidder,” he says. “So, as I was leaving, with my belongings in a box under my arm, they asked what was happening. I said I got fired. And they laughed. They thought I was still kidding.”

Of course, he wasn’t. He really had been fired.

“They took away my keys,” he says. “That was the most humiliating thing that’s ever happened to me, and losing the keys made it more real, somehow. I loved that job. I mean, I was an addiction counselor at an inpatient alcohol and drug facility. I couldn’t ask for more. But then, I became a pariah.”

Corcoran said that it was ultimately a wake-up call.

“I knew I couldn’t keep saying and doing whatever I wanted in the world, or I would keep getting fired,” he says. “I tell my clients, now, that when you get fired, you can blame the world, fight it, try to sue everybody. You can do that, but then nothing changes. Or, you can look inside, and ask: what did I do to get fired? There’s a lot more opportunity for growth in facing yourself, and accepting responsibility for the things that happen in your life.”

But that knowledge didn’t come easy; it was hard-earned. Corcoran had to mess up before he could see what he had done wrong.

“Sometimes, when we do things like that, we can’t see it until someone else reflects it back to us,” he says.

Even then, it didn’t sink in immediately.

“I went to speak with a lawyer about the possibility of a wrongful termination suit. “I’ve got to hand it to [her]. She asked how many people in Vermont do what I do. I told her, about 160. She said: ‘And you want to be known as the guy who sued the hospital where you used to work?’

“It was that simple,” he continued. “I thanked her for her time, and went off to build my practice.”

With one stroke, Corcoran had gone from a well-employed counselor, at a job he loved, to a self-starting entrepreneur.

“People who gravitate towards self-employment have a few qualities in common,” Corcoran says. “In addition to being hard-working and entrepreneurial, they also have a hard time working for others.”

That year was a tough one for Corcoran and his growing family. His second wife was laid off from her job in April. Corcoran was fired in May. And they had a baby son on the way - Matthew - who would be born in August.

Facing such an immense constellation of challenges, Corcoran’s back was against the wall. While some in his situation may have turned to drink or drugs, Corcoran knew where that road led.

“It’s all about perspective,” he says. “Sure, I was worried, scared, even. I honestly didn’t know what to do. Little did I know, it would provide me with the opportunity to stay home with my wife, and our baby.”

Corcoran attributes his close relationship with Matthew to losing his job.

“I was there all the time,” Corcoran says. “You couldn’t plan that kind of thing. It just happened. Though I was scared, I tried to make the best of it.”

Corcoran also had more time and energy to build his practice. In August, he had four clients. “Not really enough to keep the practice afloat,” he says. Then, things started to pick up.

“I was giving some talks at hospitals,” he says. “I was doing the rounds, trying to put myself out there.”

While Corcoran was well-prepared to counsel clients, he said the business aspect of his new venture was harder to grasp.

“I often think I’m right about things,” he says. “Thank God that I can see when I’m faced with somebody who knows I’m wrong, and listen.”

When Corcoran went to get his stationary made by a local printer, named Syd, for instance, he realized that Syd knew his business.

“The name of my practice, at the time, was Karuna,” Corcoran says. “I had cream-colored stationary, with green printing. And the printer said, ‘What the hell is that?’”

Corcoran tried to defend the name he had given his practice. “It’s Sanskrit for compassion, I said.”

The printer looked at Corcoran for a moment, measuring his question, then asked: “Does anybody else know that?”

“I told him it was symbolic,” Corcoran says, laughing. “He said, ‘come back tomorrow, and I’ll have a name for your business, as well as a logo.’”

Corcoran said he was taken aback, but he also felt compelled to let go, to let Syd do his work. And that’s exactly what happened. The next day, Corcoran returned.

“He did exactly what he said he was going to do,” Corcoran says. “He named my practice the St. Johnsbury Center for Well Being. White stationary, blue text, in New York Times font.”

The printer said Corcoran wanted his material to look medical, official, and, most importantly, sane.

“He’s responsible for a good part of my success,” Corcoran says. “Overnight, I went from an airy-fairy buddhist, to a white coat and a stethoscope. I ordered business cards and envelopes on the spot. We became friends. He worked out of a shop on Eastern Avenue, but he’s dead now.”

Something similar happened when Corcoran went to list his practice in the Yellowpages.

“My ad read, psychotherapist,” he said. “An old Vermonter - Chuck - asked, ‘What does that mean? What’s this psycho word about?’ I said, I’m a psychotherapist. It means counselor.”

“Not around here, it doesn’t,” said Chuck.

“I never used the word again,” Dean says. “From that moment forward, anybody asks me what I do, I say I’m a counselor.”

Corcoran credits Syd and Chuck with teaching him to play to his audience rather than his colleagues.

“Nobody wants to know where you went to school,” he says. “Maybe one person in 30 years asked me that. Instead, they want to know that I’m approachable, personable. They want to know whether I can be talked to, if I’m trustworthy.”

Sitting on the couch, Corcoran exudes serenity. He’s come a long way since his days as a restauranteur in Brockton. He’s seen his share of struggles, and has found a way to keep moving forward. When some may have looked for answers, Corcoran stopped to ask questions. Where others may have seen insurmountable obstacles, he saw opportunities. And, when it was most needed, he didn’t talk, he listened. Which, Corcoran admits, has helped him immensely as a person, and a counselor.

“Of course, my clients also want to know if I can listen,” he says. “In this profession, listening is what really counts. If I didn’t know how to listen to people, to find out what they really need, and how I may be able to help, who knows where I’d be.”