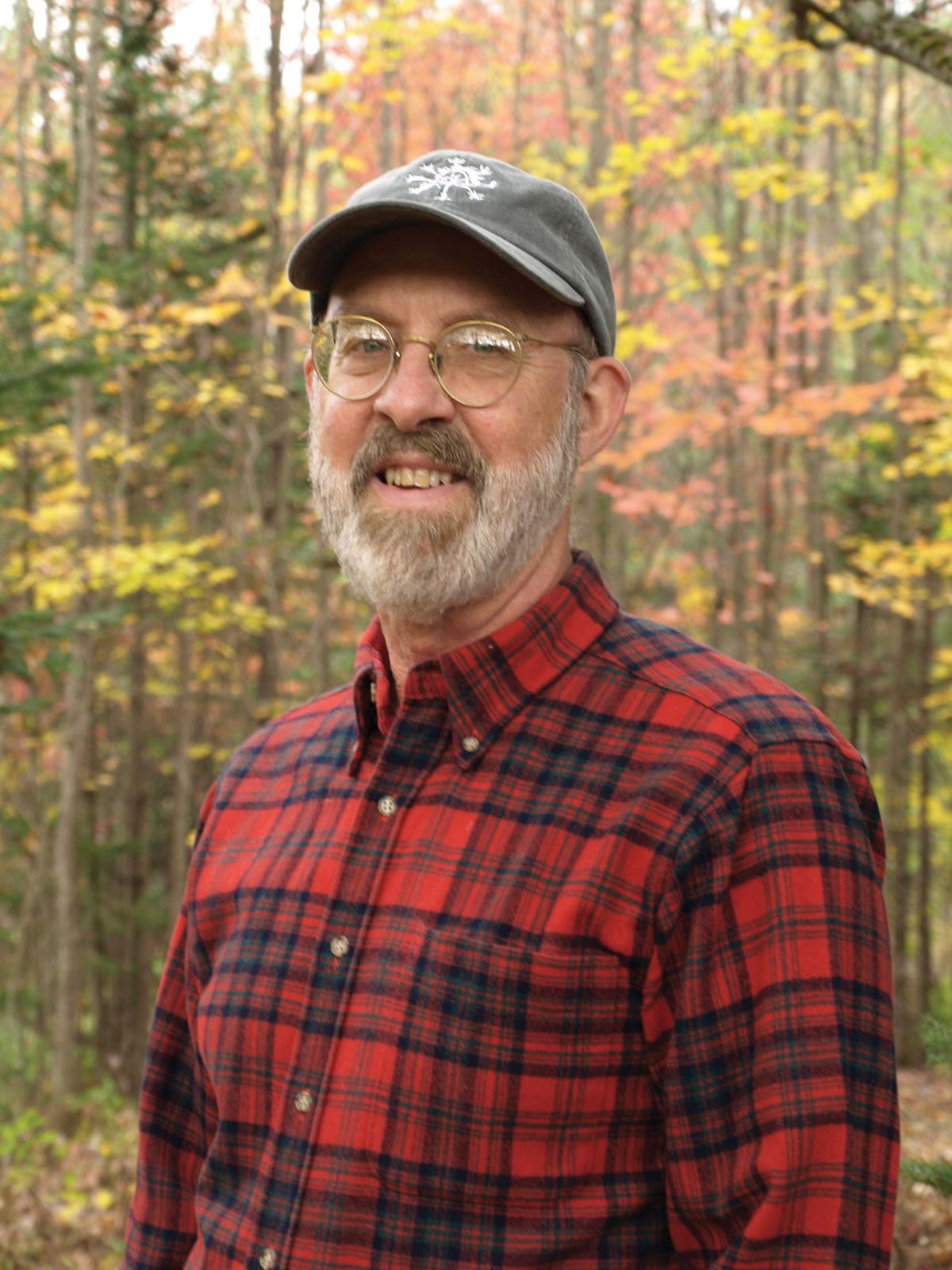 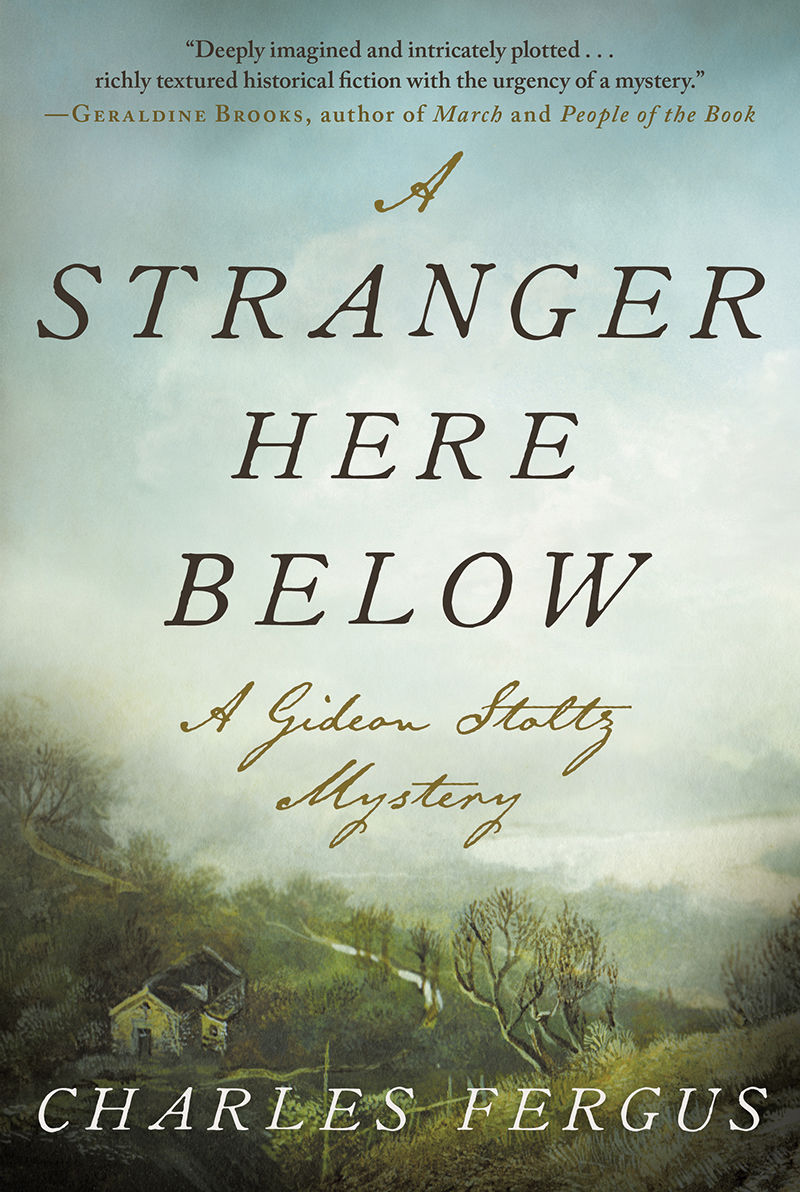 Gideon Stoltz listened to the uncanny words: like an urgent whisper by a voice old and hoarse.

Trying to locate the source of the sound, Gideon looked up. Against the gray sky, the bare branches of two trees scraped together.

Yesterday he had stood in the sunshine here on Burying Hill while Alonzo showed him the grave of the preacher that Judge Biddle had sentenced to hang thirty years ago. Now the judge’s body would go into the same ground as the man he had condemned.

Crows flapping overhead cast wary glances at the figures below, then let out scathing caws. The wind picked up, and the trees’ limbs began chattering in a tongue Gideon didn’t understand.

-Excerpt from A Stranger Here Below

Charles Fergus is the author of A Stranger Here Below, brought out in March by Skyhorse Publishing of New York. A full time freelance writer living in the town of Lyndon, he was born and raised in Pennsylvania and moved to Vermont in 2003 with his wife, writer Nancy Marie Brown, and their son, William. Fergus works as a communications consultant for the Wildlife Management Institute, and also writes nonfiction books about nature and wildlife. We caught up with Fergus during a brief lull in his book tour to talk about his life and work in the Northeast Kingdom, and how he came to write his richly imagined, darkly atmospheric new mystery.

Author Scott Weidensaul calls A Stranger Here Below, “A cracking good mystery, and a window to the time when our young country was a wild and treacherous place.” Tell us about the setting of your novel.

The novel is set in the Ridge-and-Valley region of central Pennsylvania, the place where I was born and grew up. Although I no longer live there, I know the land and its people and the nature of both. That part of Pennsylvania is marked by long parallel valleys with rich limestone soil, separated from one another by long parallel mountain ridges, mostly wooded and capped with resistant sandstone rock. It’s an appealing and intriguing mix of farmland and forest, of settled places and wild terrain. I really love living here in the Northeast Kingdom of Vermont, but a part of my heart will always remain in central Pennsylvania.

Why 1835? Partly it’s because of the old iron furnaces that dot the landscape of central Pennsylvania. Pyramids beautifully made out of stonework, they caught my eye and piqued my curiosity when I was growing up. In the early 1800s, central Pennsylvania, with its abundant wood, iron ore, limestone, and water power, was a key ironmaking region, supplying pig iron to America’s growing industries. Many writers have set novels during the American Revolution and also the Civil War. The period between those two events has been largely ignored. Yet some scholars suggest that it was one of the richest in American history, and the time when the foundations of the modern United States were laid. It was quite a time to be alive.

In the New York Journal of Books, local author Beth Kanell describes your novel as, “...an exploration of the soul in the presence of death and wrongdoing.” A similar description might fit many early shape-note hymns. Your title, A Stranger Here Below, is the open line of one such hymn. Tell us about its significance and the important role music plays in your life.

The title of my mystery, A Stranger Here Below, comes from a line in a shape-note hymn – a distinctive form of American music popular in the early 1800s. Shape-note music originated in New England and spread westward as the country was settled. It was sung a cappella, without instrumental accompaniment, by common people. It’s called “shape-note” because the notes on the musical staff are represented by four different shapes, making it easy for folks to learn how to read music. The lyrics of many shape-note songs were drawn from the writings of 17th-century English clergymen. Those lyrics can be very stark, dealing with God and heaven and hell and with sudden, unexpected death – things that loomed large in people’s minds in the early 1800s.

I start off each chapter in my book with a couplet drawn from shape-note lyrics. A Stranger Here Below will be the first in a series of mysteries, all with the same main character, and all of them titled using lyrics from shape-note hymns. There are also several scenes in the novel describing shape-note singing. I’m a singer myself – recently I participated in the annual Vermont All-Day Shape-Note Singing, which took place in Irasburg on March 30 this year. I also sing in a hospice chorus, Continua, based in St. Johnsbury. We go in small groups and sing a cappella songs to folks in their final days. And I’m part of an American roots trio called Yestermorn, along with Suzanne Rhodes of Peacham and Steve Maleski of Sutton. We sing early American music in close harmony, including gospel, folk, Appalachian, and shape-note songs. I sang in church and school choirs when I was young, then got away from singing. But when I heard the incredible harmonies of shape-note music around 10 years ago, I was hooked. Shape-note music is incredibly haunting. The songs are often in the minor mode, and they can really send chills up and down your spine.

In praising A Stranger Here Below, Pulitzer-prize winner Geraldine Brooks writes, “Fergus knows certain things, deep in the bone: horses, hunting, the folkways of rural places, and he weaves this wisdom into a stirring tale.” Tell us about your other work and how it has informed this first in the series of Gideon Stoltz mysteries.

A Stranger Here Below is my 19th book. While I have published one earlier historical novel, Shadow Catcher, based on the real-life Wanamaker Expedition of Citizenship to the American Indian, which toured the west by private rail car in 1913, most of my other books have dealt with nature and the outdoors. In fact, in addition to A Stranger Here Below, I have a new how-to nonfiction book titled Make a Home for Wildlife, and it encourages and educates people to create food and hiding cover for wildlife on land they own – from a backyard up to dozens and even hundreds of acres.

I love being out in nature, and I try to pay attention to trees, animals, weather, sunsets and sunrises, the night sky, and other natural wonders. Some readers tell me that my understanding of the natural world helps bring vividness to my fiction along with a strong sense of place. It’s these kinds of details that help bring a novel alive – things like ravens glimpsed along the road, or wolves howling in the mountains, or passenger pigeons turning the sky black with their huge, seemingly never-ending flocks. Or simply real, tangible details about rain storms and sunsets and the sights and sounds and smells of the forest.

My wife and I are also horseback riders. We have four Icelandic horses, and we ride them on our land here in Lyndon. There’s a lot of horseback travel in A Stranger Here Below, because that was a primary way that people got around in the 1830s. I bring a lot of my own riding experience into descriptions of how my main character, the young sheriff Gideon Stoltz, travels around fictional Colerain County trying to learn about and solve crimes.

Another reviewer notes that in the novel, “The characters struggle mightily with the evil around them, trying to find purpose in a world that is frequently brutal and unforgiving . . .” You’ve faced evil yourself; you lost your mother tragically. That loss, and your willingness to tap into painful memories and emotions, brought a haunting, convincing depth to the novel and to Gideon’s character. But it was, understandably, a place you were reluctant to go.

A good mystery should have a compelling plot and rich, complex characters. Not all mysteries include murder, but most revolve around characters who must confront horrific crimes. Murder is, after all, a very real human phenomenon. Murder happens to people – sometimes even to people we know and love.

In 1995, my mother, Ruth Fergus, a widow in her 70s, surprised a burglar in her home in central Pennsylvania. He stabbed her to death. I found her body.

I wrote several drafts of A Stranger Here Below, and wasn’t fully satisfied with my main character. Then a friend, who knew my personal history, made a courageous suggestion: draw on your own past and give Gideon the experience of having lost his own mother to murder.

At first I didn’t want to do that. Creating for Gideon that kind of painful backstory would mean that I would have to revisit, and in some measure relive, losing my mother to murder. Then I thought about how important truth and honesty are to the writing of good fiction. I decided I would try to depict, as honestly as I could, the way in which a murder can affect many people: family members, friends, communities, and the person who must investigate that murder.

You and your wife, Nancy Marie Brown, are both full-time writers and have built an enviable life in the Kingdom. What brought you here?

Where may local readers connect with you in the coming months?

I was on the road giving readings and signing books at bookstores and conservation centers in New York, Pennsylvania, Connecticut, and southern Vermont during April. On July 17 at 7 p.m., I’ll read from A Stranger Here Below and answer questions at the St. Johnsbury Athenaeum.