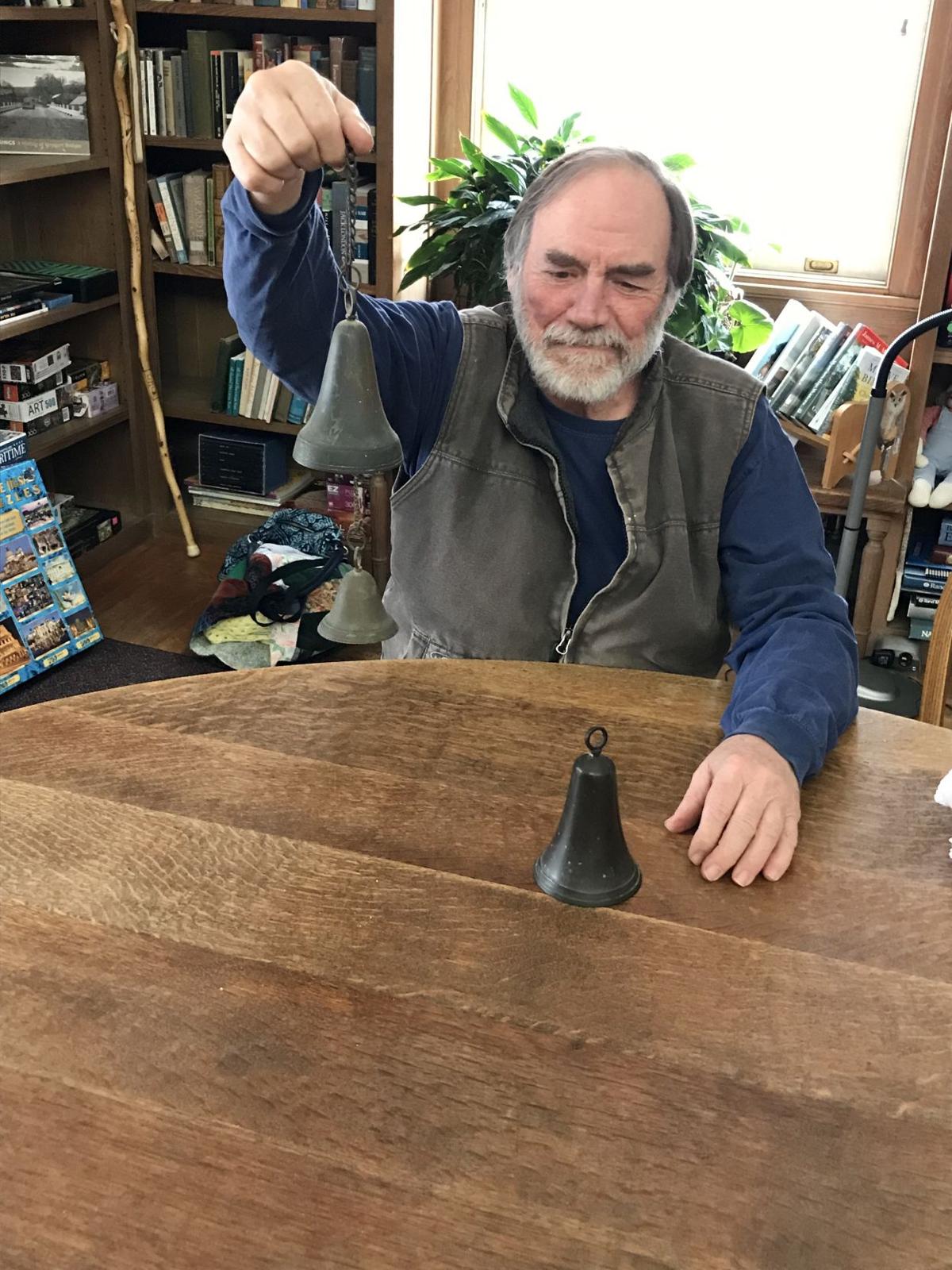 Mike Michaud shows off his Bells of Peace. 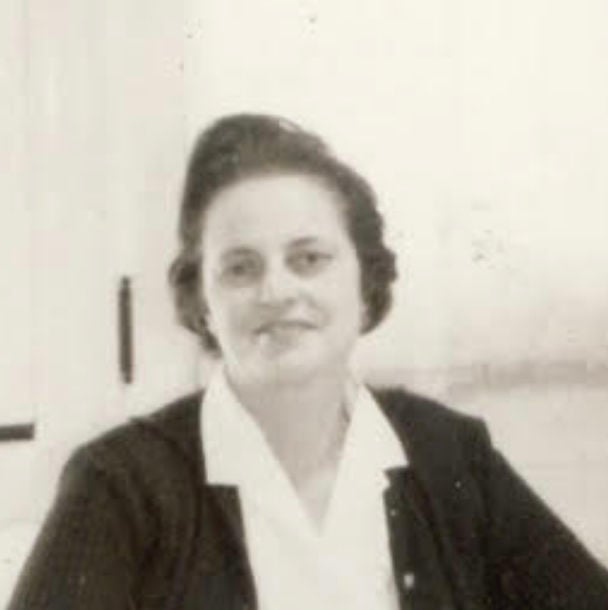 Mary Kropsky, long-time secretary and sometimes chair of Bells for Peace. Her papers, held at the East Burke Community Library, provided much of the detail for this article. 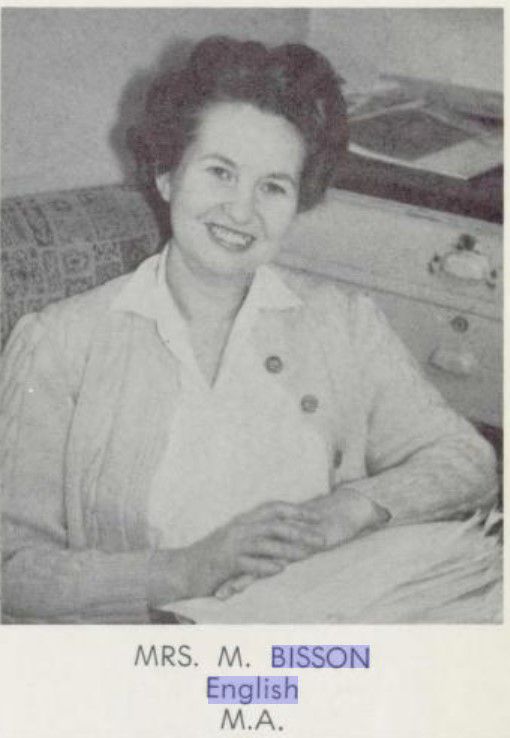 Mary Bisson, professor of English at Lyndon State College. Chair of Bells for Peace in 1960, she said that over its first five years, the project became a symbol of peace throughout the world. 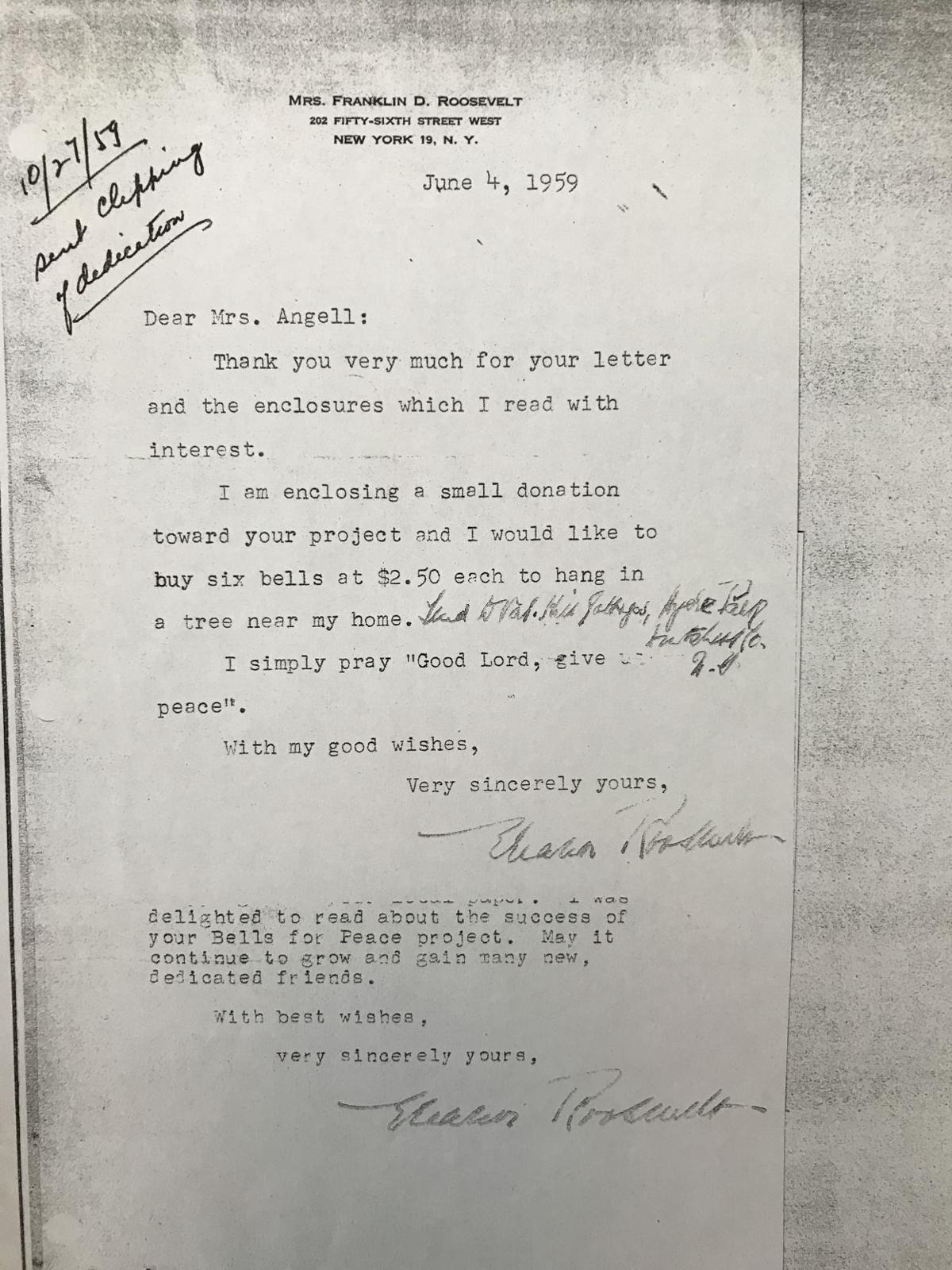 A note from Eleanor Roosevelt requesting bells for her own home. 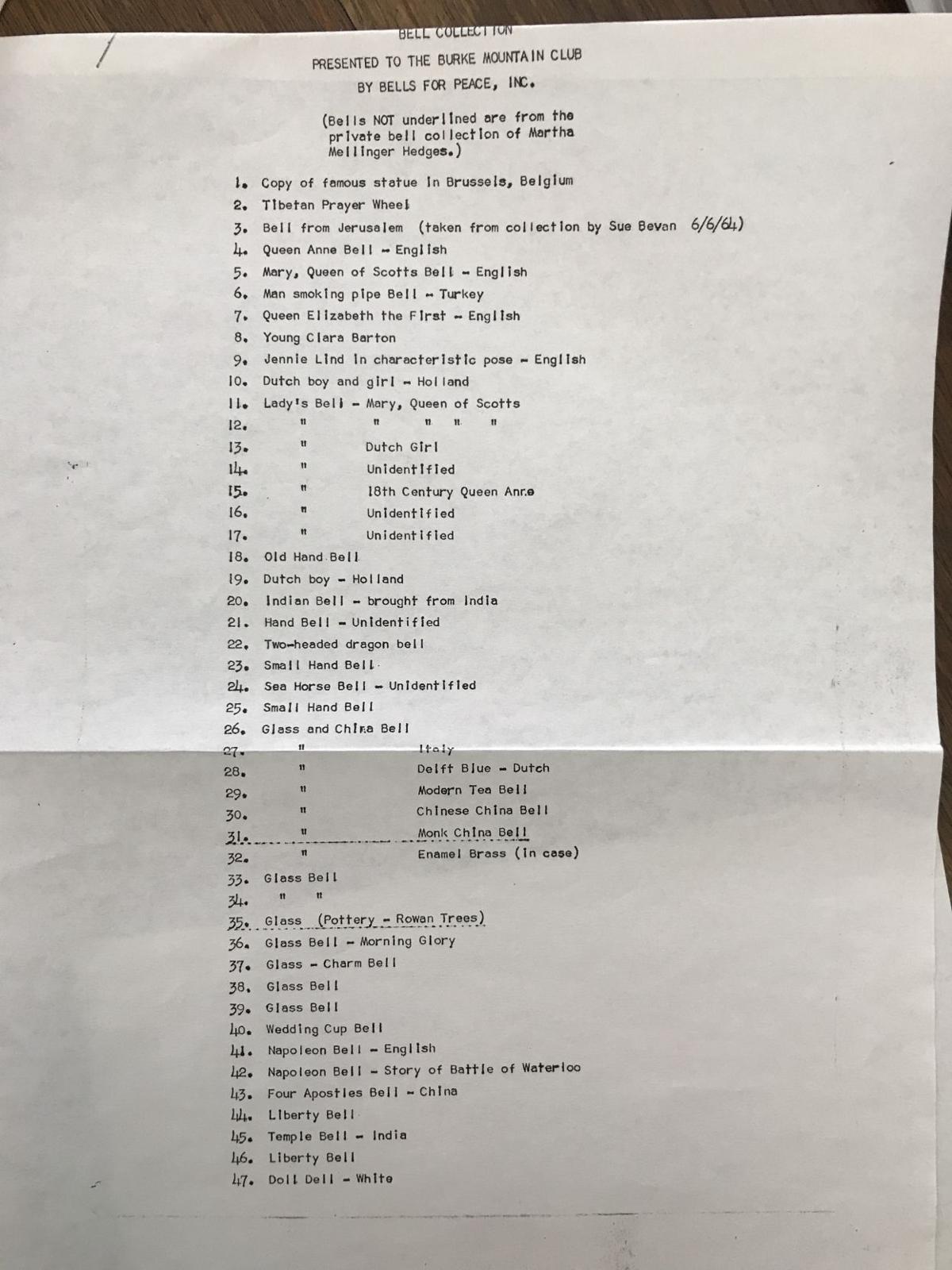 Long before the peace movements of the Vietnam War years, Peacham resident Louis Lamoureux invited people to consider a Northeast Kingdom project that would speak for peace.

First meeting around 1955, the group’s motivation came partly from the experience of the world war that had ended 10 years earlier, and partly from exposure to one of the nation’s outspoken voices for the movement: Eleanor Roosevelt, whose husband Franklin, as U.S. President, had steered the nation through the Great Depression and most of the Second World War.

“A school bell with a handle, used for more than 60 years by a teacher in Ryegate, is typical of the hundreds so far donated,” wrote Mrs. Paul Hunt. And if her headline was a bit exaggerated—she claimed 700 bells—the project’s actual spread was astonishing, with 33 states replying to requests for bells, 14 official state bells contributed, and at least 200 bells recorded as donations or loans, including ones from Korea, Thailand, Malaya, Cambodia, South Viet Nam, Laos, France, England, and Australia.

In 1959, the local project hit the state and national news, as the Bells of Peace Committee focused on hanging the bells in “peace gardens” on the slopes of Burke Mountain, in Darling State Park. Among them would be a wind chime sent by Mrs. Roosevelt, to honor her late husband (he died in April 1945).

Although most of the people who began the project are now gone, their names today recall the many segments of the community drawn to the project: Mr. Lamoureux from Peacham, “Mrs. Phillip Ransom” of Passumpsic, Henry Balivet of Danville, Mary Bisson (professor of English at Lyndon State College), the Rev. Clyde Campbell of Lyndonville and the Rev. Armand Fortin, Mary Kropsky (co-owner with her husband Harry of Hills’ Department Store in Lyndonville, and a member of the local synagogue), and others like Ella Fifield, Charles Duval, Frederick Blakeslee, architect Dan Kiley, Fairbanks Morse manager John M. Pascoe, Mr. and Mrs. Leslie Moore of St. Johnsbury, and many more.

From 1959 to at least 1965, the bells continued to arrive and were hung in the trees of Burke Mountain, along the Toll Road and in plots called “peace gardens,” created and maintained by local organizations and even larger groups like the North Country (Vermont and New Hampshire) chapter of the American Gold Star Mothers. Each year there would be a dedication or re-dedication.

Vermont governor Phillip Hoff described the bells on the mountain, by then also in archways and gardens, as “God’s Cathedral.” Vermont’s U.S. Senator Winston Prouty declared:

Peace will reign in the world when it dwells in the hearts of men. This is the truth which has inspired my fellow Vermonters to conceive in religious reverence, and with Yankee ingenuity to inaugurate, the inspirational ‘Bells of Peace Project.’

To dramatize the deep yearning for peace which is to be found among all peoples, and to call the men and women of the world to prayer for peace, they have set aside one of the most beautiful mountains in my own part of the state—the Northeast Kingdom—as a perpetual reminder of mankind’s glorious objective of a world without war.

Senator Prouty sent his words to U.N. Ambassador Adlai Stevenson, asking him to speak at the 1961 dedication ceremony. Stevenson didn’t come, but many others did or sent telegrams or prayers. Mrs. Roosevelt, in addition to commissioning a bell in her husband’s memory, requested a bell to be sent to her, at her “cottage” in Hyde Park, New York. Her death in 1962 resonated powerfully in the local group.

The project continued to appear in both local and national newspapers, and in 1964 the committee labored to dedicate a bell to the recently assassinated U.S. President John F. Kennedy. In 1965, to everyone’s excitement, Bells for Peace had a role in an exhibit at the New York World’s Fair.

Meanwhile, at home, other heart-warming bells continued to arrive: Mrs. Josephine White of Quebec brought a bell made in Lyndonville by her father, Joseph C. Ross, who cast it at the Diamond-Bronze Company in Lyndonville, some 30 years earlier. The bell from Korea, a temple bell, came via a Vermont soldier “on a mission,” who saw it and thought of “the mission back home—Bells for Peace,” wrote Patricia Amidon for the magazine “Hobbies.”

And noted travel writer Leavitt C. Morse, an editor for the “Christian Science Monitor,” described hearing about the bells first in East Burke from “Mrs. Charles Powell, a nearly 80-year-old native of this town, who…is vigorously interested in seeing that the project comes to full fruition as quickly as possible.” The travel writer wrote that Mrs. Powell enlisted him “over a plate of homemade doughnuts and old-fashioned caraway cookies.” And Morse’s article also described the committee’s new dream: to establish a bell museum at the mountain.

Boots and Bells on the Ground

Ford Hubbard of Burke, now more than 80 years old, recalls first coming to Burke Mountain in 1968. He would stay until 1979, becoming manager of the ski area. The bells, he recalls, were already becoming hard to reach. “They were up quite high in the woods,” he explained. “The trees grew up and here they are, these little brass things, ding-a-linging around in the trees.”

At that point, Burke Mountain maintained a display case of bells in the Stone House, as well as outdoor benches on which to sit and listen to the windbells’ music. Some of the bells were gently modified with long weighted strands to hand below the clappers and catch the wind. And the Fairbanks-Morse Company, with architect Dan Kiley, created a memorial garden with a cross-shaped slate pathway. Patricia Amidon wrote that a Memorial Garden also came to life, “where people have set up simple windbells in memory of loved ones.”

But the vision of dozens of peace gardens of bells that would extend all the way to the mountain summit didn’t quite come to fruition. Among other factors, the mountain’s ski resort developed trails through some of the terrain.

Gary Novosel, who grew up in East Burke, said, “I remember in the 70s when the bells were located near the bottom of the dipper Poma at Burke. When the Sherburne area was put in they were supposed to be moved down there. There’s a metal sculpture to the right of the chairlift at the tree line which is where they were supposed to go.”

Instead, Hubbard said the bells were given back to their donors. At least, the bells that were easy enough to reach. The others remained, as the trees continued to lift them higher. North Kirby resident Karen Moore said, “I remember walking the trails where the bells were hung from the trees. It was amazing to see and hear their chimes as the breeze stirred the branches.”

Some people walking or skiing the slopes found bells that had tumbled down. Mike Michaud has a pair of them, cast in bronze. When Charlotte Downes, librarian at the East Burke Community Library, hosted some discussion gatherings on local history, Michaud brought them along. His wife Lois recalled, “They were all over the ground when we were in high school” in the late 1960s. Mr. Michaud pointed out that the bell chains were iron, which of course rusted, so eventually snapped, letting the bells tumble down. One of his bells shows the kind of clapper adjustment made for better ringing in the breezes

Where Are the Bells Today?

Many bells did indeed reach their original donors. Others never arrived, and some of them still chime on the mountain. Jason Sanderson, who grew up nearby, remains sad that his family’s donated bell didn’t reach them. When he wrote a history of the town called “In the Shadow of Old Burke Mountain: A History of Burke and Her People” published in 2016, he followed in the footsteps of town historian Phyllis Burbank, at her request. But he couldn’t find people who knew a lot about the Bells for Peace by then.

“I think it was a beautiful idea, and I wish they'd bring it back…in these trying times, the gentle ringing of the bells would be a balm to the spirit,” he reflected.

A surprise took place in March, while tracking the bells’ journeys. The original list of 200 donated bells included a large number that were technically on loan from the bell collection of Martha Mellinger Hedges. Bells for Peace had an obligation to return those bells if the project closed, and their records show these are the bells that were in the display case at the Stone House on the mountain.

The American Bell Association, contacted about this, passed word to Judy Blake in Shoreham, who today owns and operates the Shoreham Bell Museum there. Among six thousand bells in the collection that she “married into” may indeed be some of the Hedges bells, and perhaps others that left the mountain. She thinks it’s possible! But with the sparse descriptions on the Bells for Peace lists, even after her museum opens to visits in the summer, there might not be a sure match.

But the point of Bells for Peace was bigger than just hanging bells in trees, and Senator Prouty summed up the hope that remains as vital now as it did 60 years ago: “Faith, we know, can move mountains. Now on Burke Mountain in Vermont perhaps it may be demonstrated that mountains can move the hearts of men.”