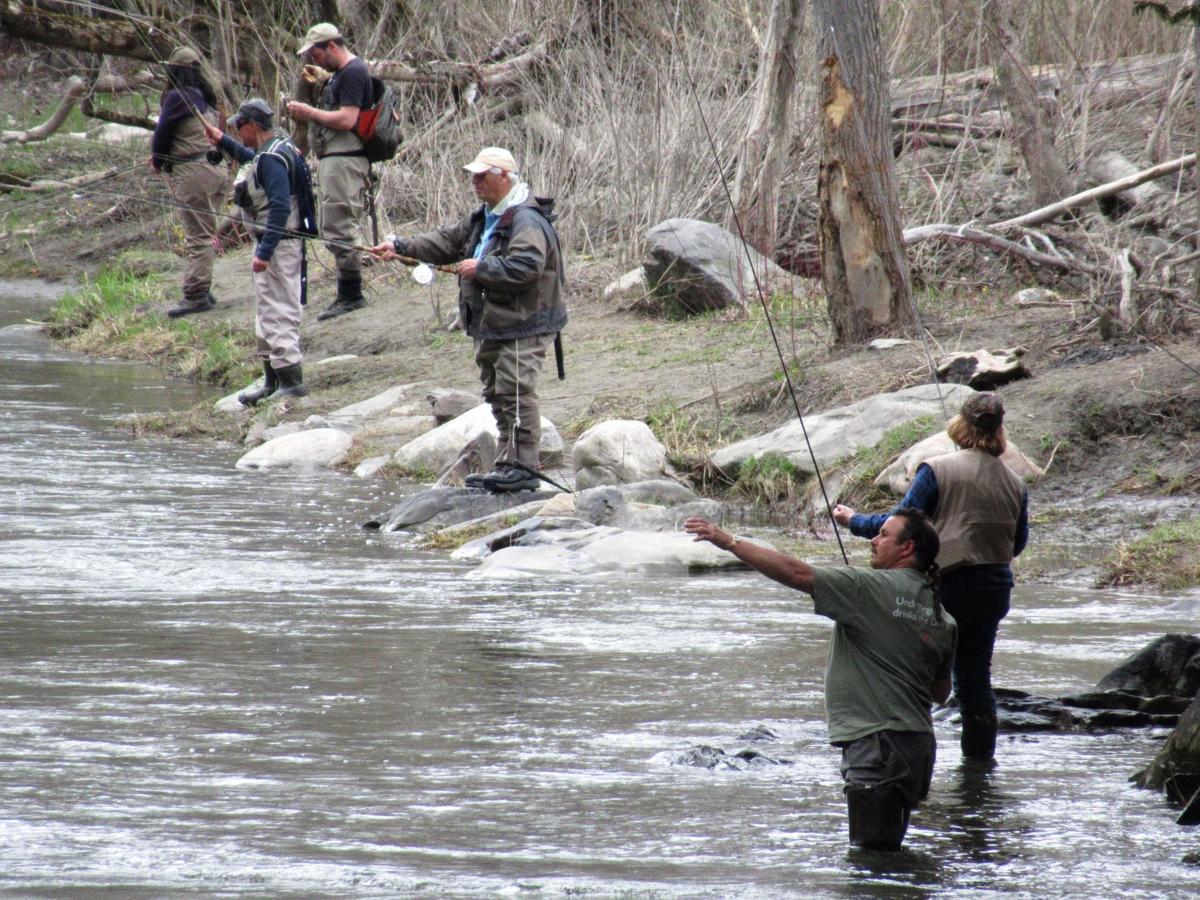 Anglers cast their fishing lines, hoping to catch a Steelhead Rainbow Trout during the spawning season on the Willoughby River. 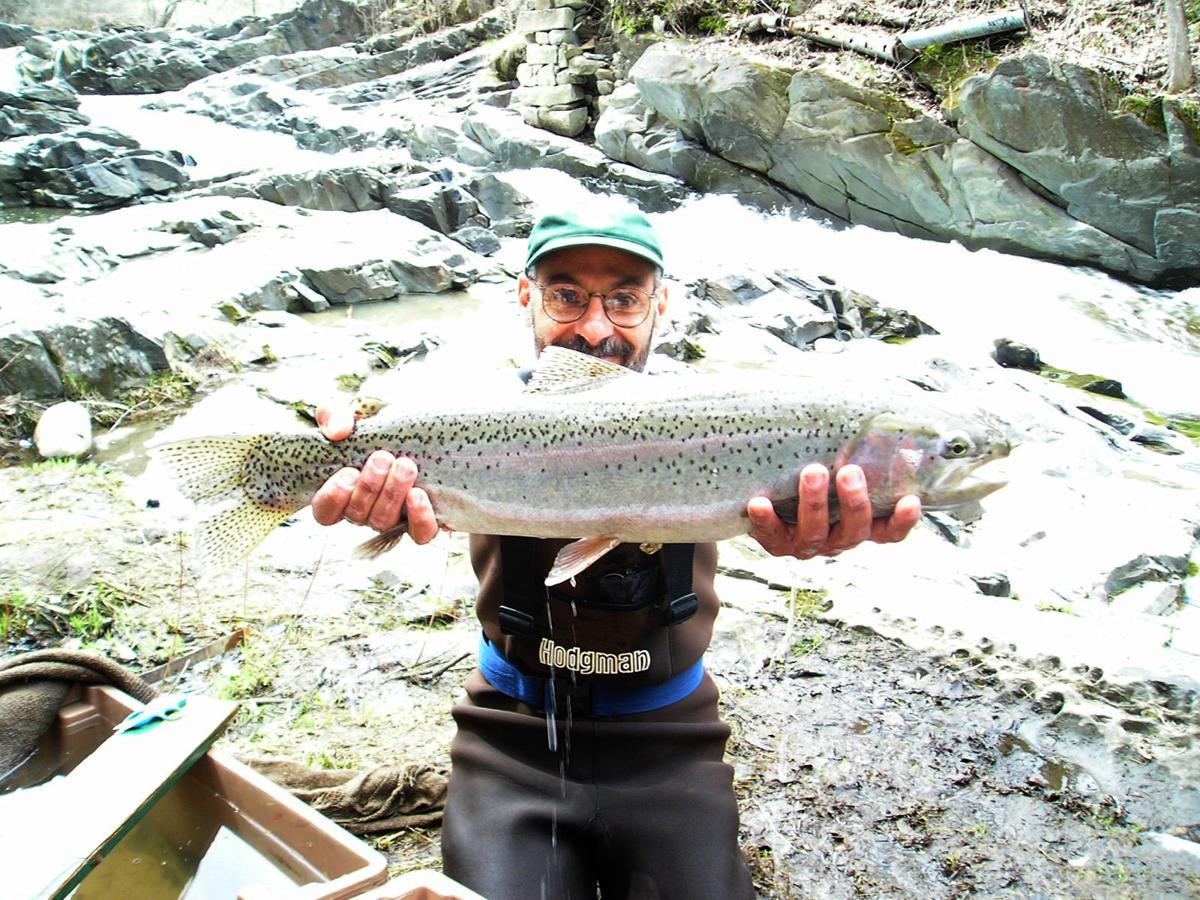 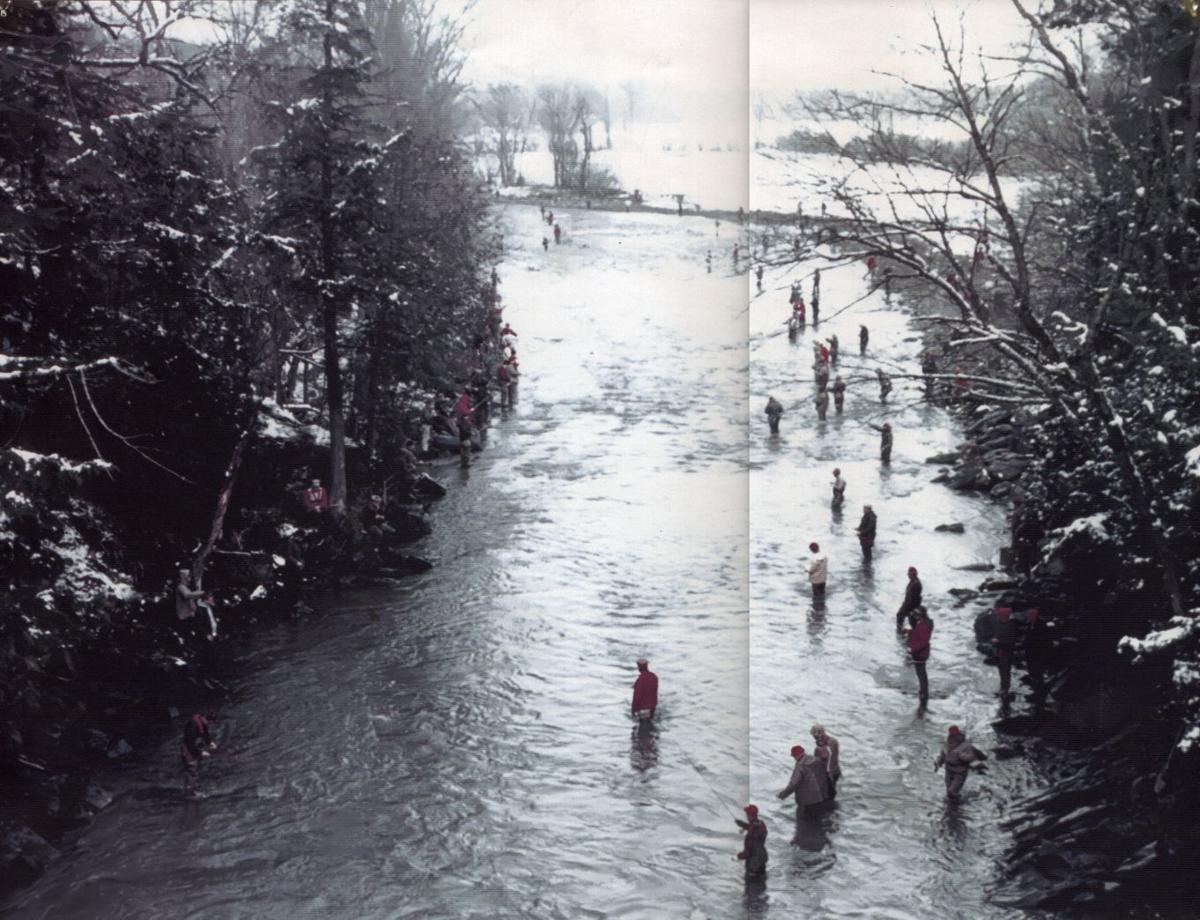 Anglers line the riverbank in the 1950s.

They get up in the early hours of the morning, some driving hours to get to the Willoughby River on the opening day of fishing season. More often than not, the second Saturday in April will dawn cold and blustery – and the river will be high – not the best conditions for hooking steelhead rainbow trout as they swim out of South Bay on Lake Memphremagog to their spawning grounds.

But the weather does not matter. What’s important is finding a spot on the riverbank just below the waterfalls in Orleans, lighting a good cigar, listening to the rush of the river, and waiting for daylight. Other anglers start to arrive, friends who see each other only once each year reminisce about past opening days on the river. They all wait until sunrise to make their first casts.

“Fishing is a disease, especially for steelhead,” said Roland (Guy) Grenier of Waterford, who has not missed an opening day on the Willoughby River in over 30 years. He added, “More important than the fish are the people, just as diehard as I am.”

Art Rainville of Danville echoes Grenier’s opinion. He has been fishing the Willoughby River each spring for more than two decades, and he loves the sunrises on the river, the mastery he has developed over the years to catch the large and cagey rainbow trout, and the annual gathering of seasonal friends. “It’s like old home day,” said Rainville.

Early season fishing for steelhead rainbow trout on the Willoughby River is an activity cherished by many, but the annual event is also experiencing change. Over the decades, the number of anglers who make the annual pilgrimage to the river has dwindled – and there is debate about whether the steelhead rainbow trout population in the Willoughby River is on the wane too.

In the early 1920s, the United States Fish Commission introduced steelhead rainbow trout from the Pacific Coast to Vermont waterways, including the Lake Memphremagog watershed. Close to a century later, said Jud Kratzer, a fish biologist for the Vermont Fish and Wildlife Department, the Willoughby River is one of the most productive rainbow trout rivers in the state, and the river is home to a self-sustaining population of wild rainbow trout.

The natural population of steelhead rainbow trout has been augmented since 1990 by fish grown at the Bald Hill Fish Hatchery in Newark. Fish are grown there to fingerling size, and then the tiny trout spend two years in a private pond in Essex, VT, before being returned to the Willoughby River. The stocking program is a collaboration of the Orleans Rod and Gun Club and the Vermont Fish and Wildlife Department.

According to Steve Boyajian of Essex, who helped establish the unique stocking program for the Willoughby River, approximately 8,000 smolts were harvested from the pond and placed in the river last year. Boyajian has a large store of knowledge and love for the Willoughby River and its fishery; he has walked the banks in quest of the rainbow trout each spring for more than 60 years. He discovered the Willoughby River with a friend in 1954, just a short time after he was discharged from service in the Korean War.

Boyajian believes that for at least the past two decades, there has been a marked decline in the steelhead population in the river, and many other anglers agree with him. The cause of the fish decline – if indeed there is a fish decline – has been attributed to many factors.

Boyajian focuses on three issues. He believes that northern pike (a predator fish) are thinning the steelhead migration from Lake Memphremagog’s South Bay to their spawning grounds up the river. Boyajian also worries about a growing population of cormorants on the lake (a fish eating bird), and he feels that a 10-fish catch limit for Canadian anglers (the steelhead spend much of their life cycle in the Canadian portion of the international lake) is a harvest rate that impacts the fish population too.

Kratzer, on the other hand, is uncertain if the steelhead population in the Willoughby River is in decline at all. He said, “When we look at catch rate data from angler surveys … we have not seen a clear decline in fish caught per hour.”

Kratzer added, however, “I think the river has changed for sure.” He said siltation and bank erosion have altered the traditional spots anglers have used to catch the wily fish. “I feel the fish don’t hold in those areas like they used to,” said Kratzer.

There has been some communication between Willoughby River anglers and Vermont Fish and Wildlife officials, but in some quarters, hard feelings remain. Boyajian and others like him know the river like the back of their hands and cherish it – and feel like they are not being listened to. In order to remedy that situation, meetings of Willoughby River anglers and fish and wildlife officials have been organized.

“There have been some negatives,” acknowledged Rainville, but he added, “What’s most important is that we focus on what makes the river special … I think we can get that camaraderie back again.”

A secondary issue that concerns both anglers and fish and wildlife officials equally is the dwindling number of people who choose fishing as a pastime, both in Vermont and across the nation. “Less fishing licenses are being sold. It’s true all over the country,” said Kratzer.

Something that hasn’t changed over the years on the Willoughby River, however, is the beauty and attraction of the waterfalls that are just outside the Village of Orleans. If you stop by in April and May and look off the bridge near the fishing access, downstream you will see anglers perched on the riverbank, or mid-stream in hip waders casting for a trophy catch. Upstream from the bridge, people will be seen balancing on wet rocks, with cameras or with youngsters in hand, waiting to catch a glimpse of silver as the steelhead rainbow trout leap above the rushing water as they battle upstream to their spawning grounds.

If anything, “fish watching” on the Willoughby River has increased over the decades. Stone stairways have been built to provide better access to watch the jumping rainbow trout. Kratzer noted, “This is a rare opportunity to watch fish in nature. Images of salmon or trout jumping over scenic waterfalls are typical from places like Alaska, but many people may not realize we have the same viewing opportunities right here in Vermont.”

Attracting people to the Willoughby River each spring is noted in the Town of Barton’s municipal development plan: “It is well established that the Willoughby Falls springtime fishing contributes significantly to the local economy.”

Historically, the Willloughby River was a special draw to early season anglers, because for many years it had the singular distinction of opening two weeks before any other Vermont river for trout season.

A dedicated cadre of anglers came year after year to the spot – and many of those early anglers have been honored on a stone memorial set into the hill on the west side of the waterfalls. In 2001, the access area near the falls was named in honor of another early angler of distinction, Germaine A. Choiniere.

The Danger and the Joy

It is not an exaggeration to say that early season fishing on the Willoughby River can be a challenge. It can be cold, and wet – and it can be dangerous.

It can be fraught with perils – maybe even from your buddies.

Rainville loves the river and the early season fishing. “I love watching all the types of sunrises, and even dealing with frozen fishing rods.” He loves gathering with his buddies mid-morning for a coffee break – or watching a younger man downstream land his first big fish.

Rainville remembers with a laugh the day he gave advice to buddy, telling him the type of fly to use to land a trophy rainbow, which often weigh in on the Willoughby River between two and five pounds. “I told him the wrong fly and had a good laugh when he went home that night and tied 20 of them.”

Grenier told a story about an icy April morning when he decided to break away a little bit from the crowd, and went down the river to find a more secluded spot to fish. “I was fishing with a bobber, and I was fishing in front of a snag,” he said, thinking he might have luck in a spot where the stealhead are known to congregate.

The tricky fishing came at the cost of several bobbers, and when his last one got caught in the snag, Grenier decided to wade into the frigid water to retrieve it. “My foot got caught in a root, and I went head first into the rushing water,” he said. “Luckily, I was able to grab the root to keep from being pulled into the snag – and I was able to pull myself out of the water.”

He was safe, but soaking wet. The air was icy, so what could he do?

Grenier decided to head to a laundramat in Barton. The nice elderly lady who worked there was not flustered by the soaking wet fisherman dripping in front of her. She directed Grenier to an office, told him to strip down, and proceeded to throw his wet gear into a dryer.

Grenier waited in the office wearing a short, waterproof coat. He was a bit glum.

So the laundry attendant tried to cheer him up. She told him, “You know, we get at least one of you in here every year.” It was small consolation.

But by the time his clothes were dry, and Grenier had regained the feeling in his hands and his feet, he became more determined than ever. He stopped at a store and bought new bobbers, headed straight back to the river, and had a whole afternoon of fishing ahead of him.

“I remember it as a wonderful day,” reminisced Grenier. He even caught a steelhead before he headed home.