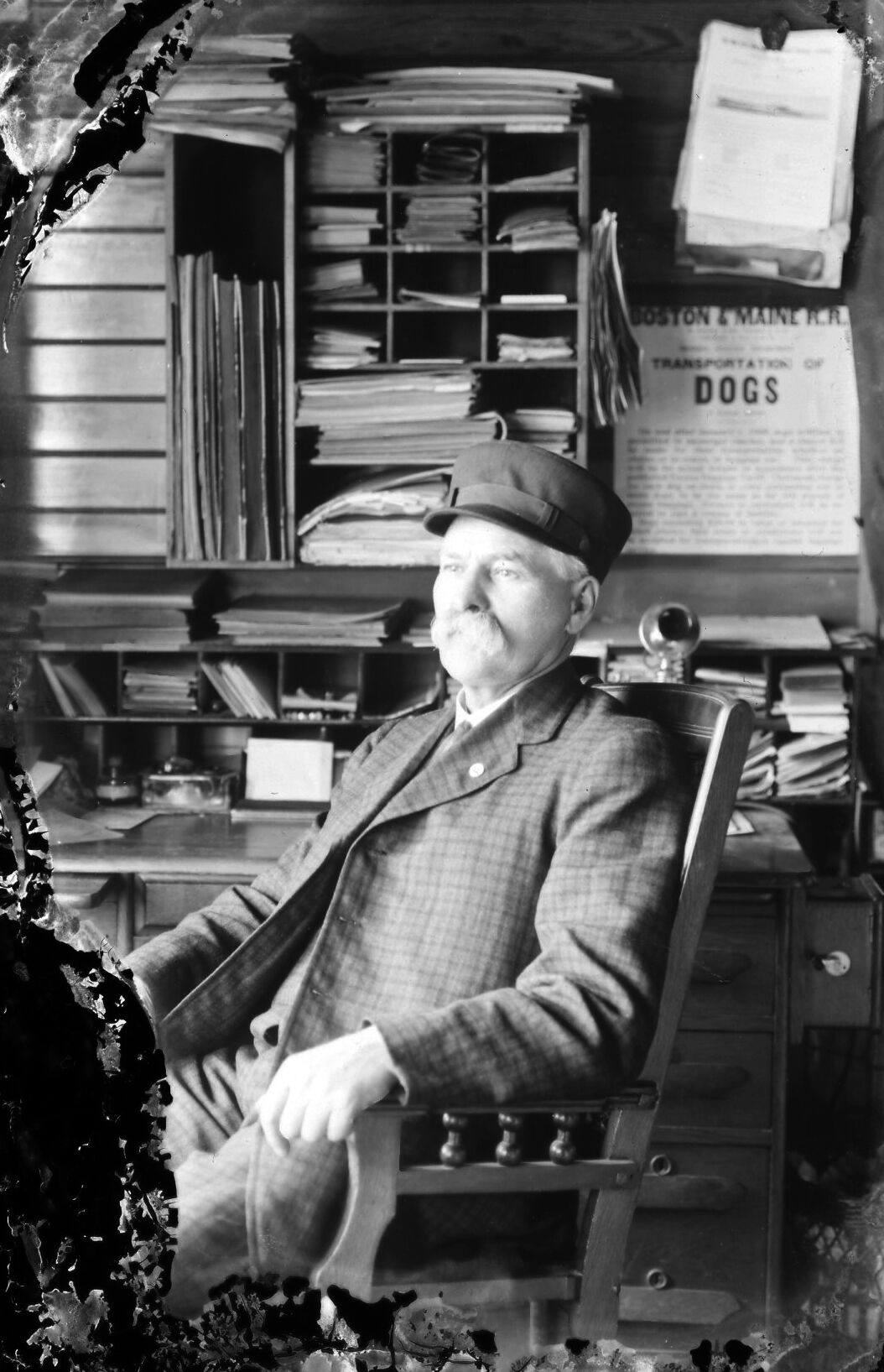 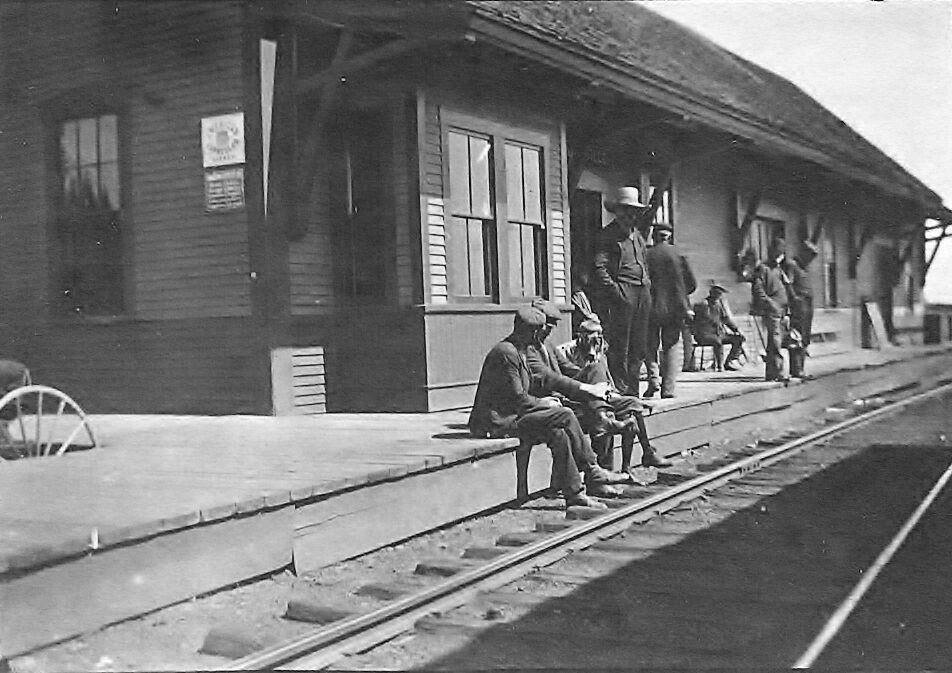 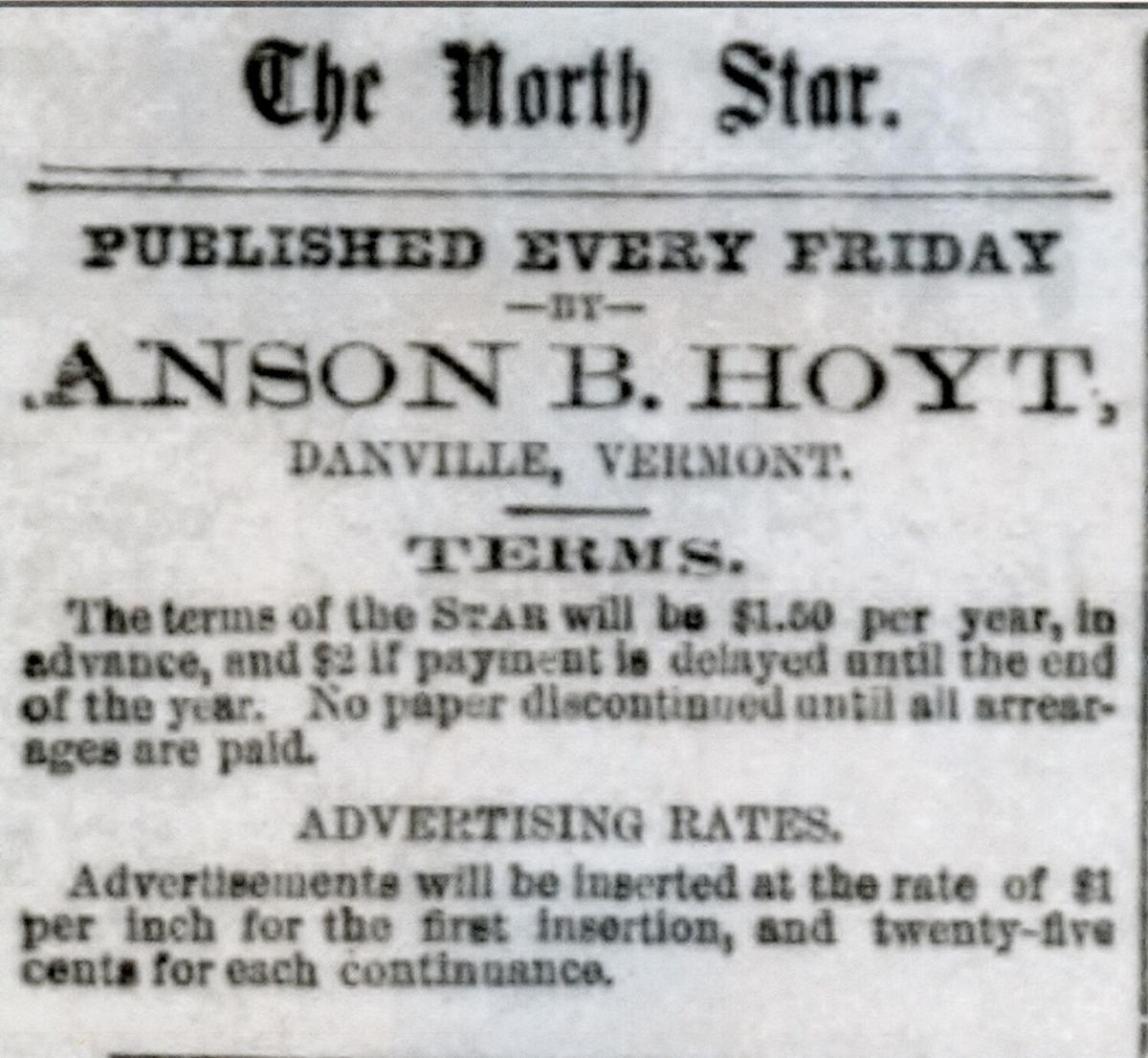 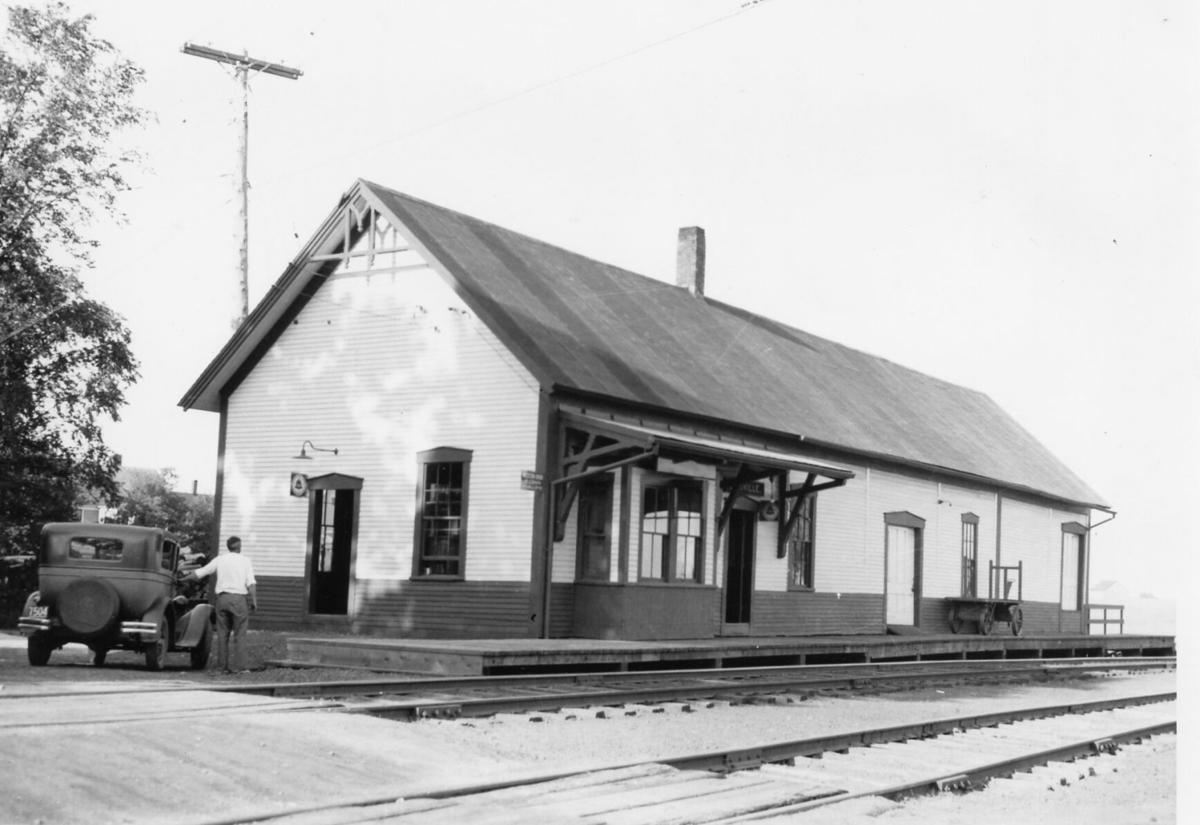 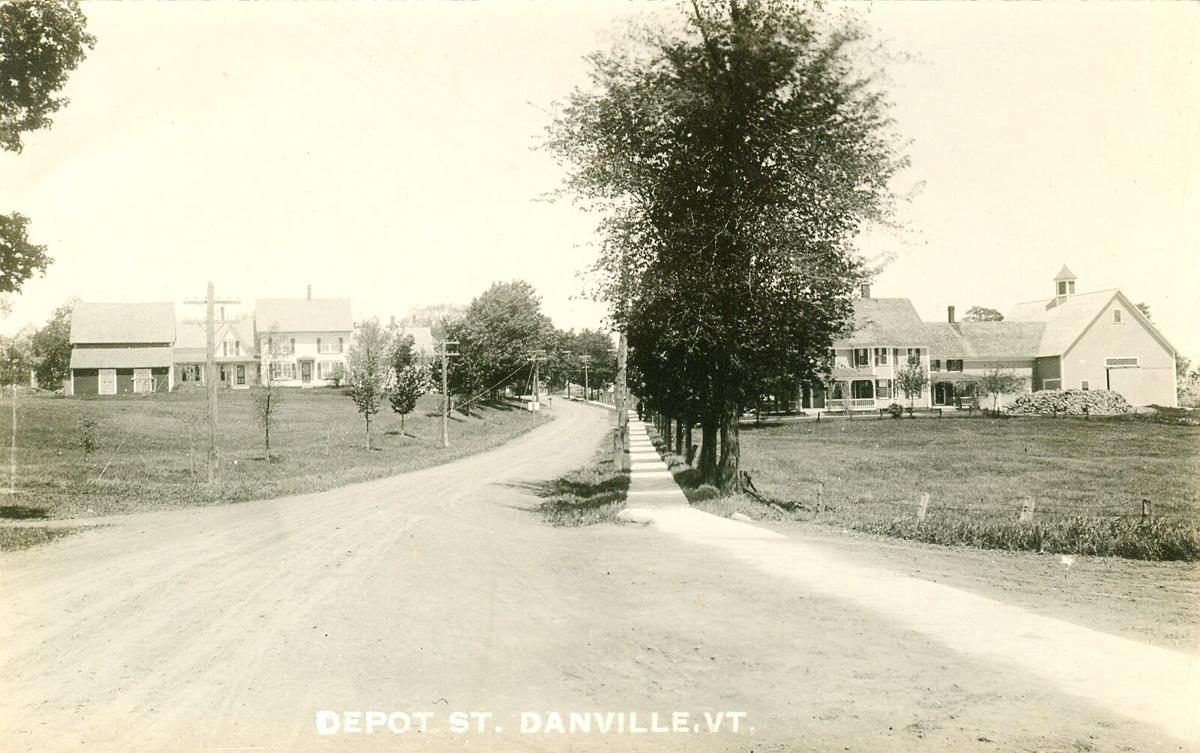 Depot Street as it was looked in 1918. The street later became known as Railroad Street and now  commonly referred to as Peacham Road. 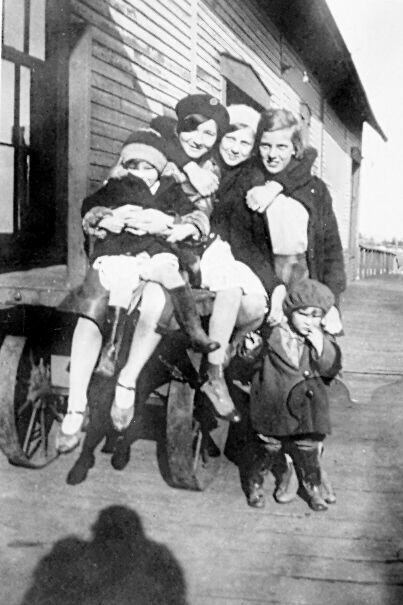 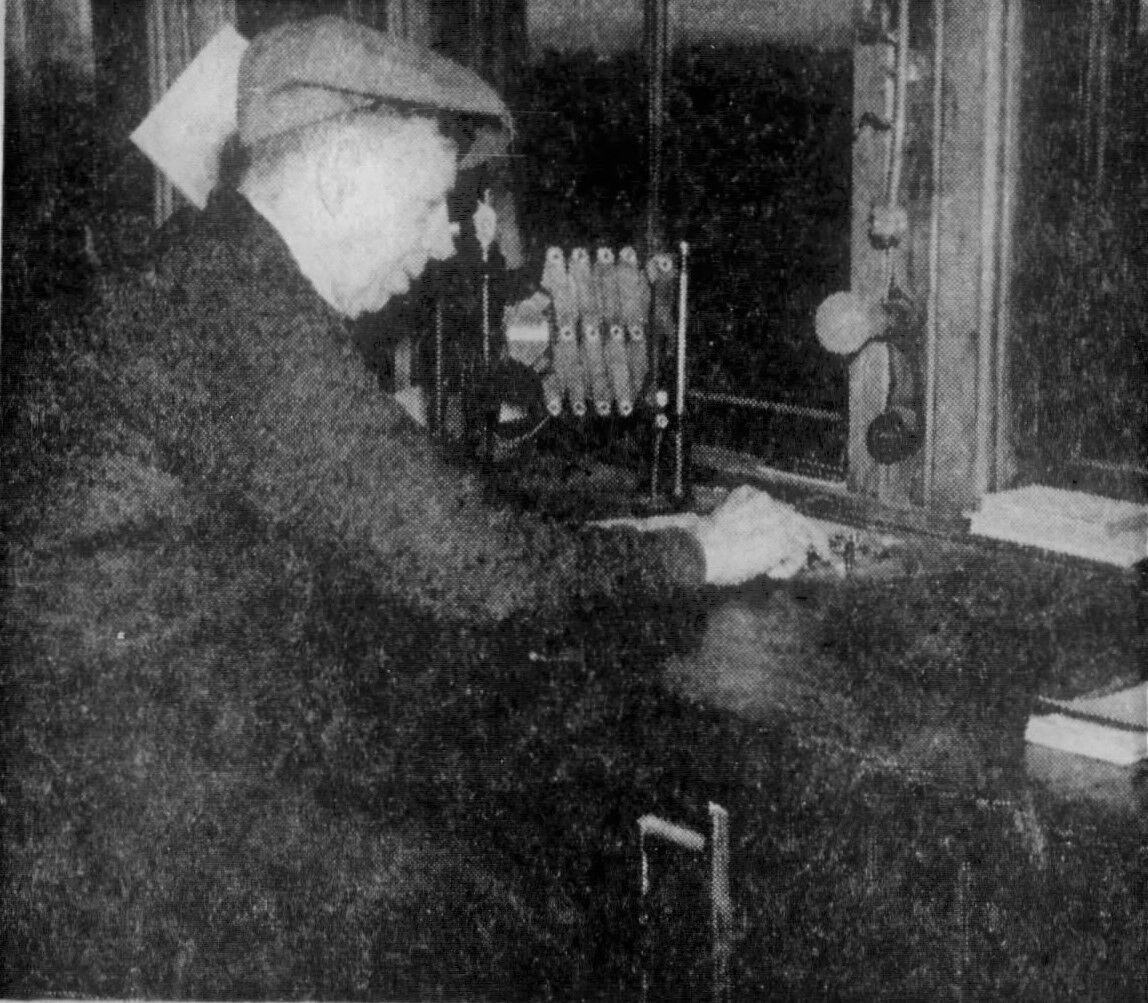 In its heyday, the railroad depot was a favorite gathering place for locals and travelers of all ages.

People loved watching trains loaded with passengers and freight arrive and depart several times a day. It was an easy walk down the well-manicured sidewalk from the village green to the station. The atmosphere was exciting and there was always an interesting story to be shared by the station agent.

The building served as a welcome center, alerting travelers to the best places to stay, things to do and ways to explore the countryside in and around Danville. West Danville no longer had hotel accommodations however, Joe’s Pond beach was a popular destination for summer travelers. Tourists could hire a driver with a horse and buggy to take them for a scenic ride over country roads such as along Walden Hill Road or down beside the Water Andric and enjoy a leisurely picnic lunch and afternoon of boating at Flint’s Lakeside Park on Joe’s Pond. Summer guests and their families could also take the St. Johnsbury & Lake Champlain Railroad from the depot in Danville to the station in West Danville to spend the day.

Joe Moore, long-time Danville resident and former postmaster, said in the July 1994 issue of the North Star Monthly, that Carl Lang, who lived on Walden Hill Road, and Chandler Heath, on Brainerd Street, had fancy horses and shiny wagons and were frequently enlisted to provide these types of services to visitors.

Station agents were well-known and respected throughout the community for their jovial and personable demeanor and would often receive gifts of appreciation. The newspapers regularly reported interesting stories of activities and events, sometimes involving the station agent at the local railroad depot.

According to a report in the January 1874 North Star, Silas Stone, Danville’s first station agent was presented with a nice warm overcoat by several of his friends. The gift was a token of their affection and appreciation for serving in his position with “promptness and fidelity” ever since the railroad started. They felt it would be just the needed thing for the upcoming cold winter months while going to and from the depot. The gesture was rather unexpected but gratefully received by Mr. Stone.

Another newspaper account said Mr. Stone had quite a scare as he was performing his telegraph duties at the depot in late May 1872. During a thunder shower, lightning struck the electric wire at some point between Danville and St. Johnsbury. It traveled along the line until it entered the telegraph office where Stone was working, briskly throwing him from his telegraph machine. The telegraph machine was not damaged, being grounded by a lightning protector however, the North Star reported that it was Stone’s first introduction to “untamed electricity” and after receiving quite a severe shock, he later admitted he hoped he would never have a repeat performance of that magnitude.

Charles S. Ranney was born in Kirby in 1855 and began his career with the railroad as a young man. After moving to Danville in 1885, he spent the next 32 years working for the St. Johnsbury & Lake Champlain Railroad in one of the longest terms of service on that road. He was described by many as a “very efficient station agent” and a citizen of high ideals, always faithful to his work. Besides tending to his many duties as station master at the Danville depot, he was involved in many civic organizations and served as the town constable and tax collector for many years. In 1909, he was elected as a deacon of the Danville Congregational Church.

Local photographer Harold E. Hatch was documenting life in Danville through the lens of his camera in the early 1900s and captured a variety of scenic landscapes and interesting shots of people and families in town as they went about their daily lives. While at the Danville depot sometime in 1908, Hatch snapped an especially good image of Charlie Ranney wearing his station agent hat and looking quite jolly while sitting at his desk in the depot ticket office.

It was quite an exciting evening in late March 1908 when John D. Williams who lived across the road from the depot noticed a light in the station. When he went to investigate, he discovered a pane of glass had been removed from the window and someone had broken into the building. After trying unsuccessfully to wake the town constable and station agent Charlie Ranney, who lived across the tracks, he alerted another neighbor, Frank Stocker. When the two returned to the station, they could see footsteps in the fresh snow and someone heading up the railroad tracks in the direction of West Danville. Deputy Sheriff Charles W. Thurbur was notified, and he immediately telephoned several parties along the route to be on the lookout. The tracks led to the stone shed at the lower end of West Danville village, owned by Goss and Conley, where the culprit was later found sleeping by Ashley J. Goss and West Danville selectman and store owner George W. Gile. He was promptly turned over to Sheriff Thurbur and brought back to Danville. The man proved to be a Hungarian tramp from New York who spoke very little English. It was determined he was wearing a pair of pants and two well-worn coats belonging to station agent Ranney. He had also taken a book containing tax receipts and other important papers belonging to Ranney.

One of Danville’s most familiar and well-liked station agents, the last to serve in the position, was Perley J. Pressey. Everyone had a story about Pressey. He was born in East Hardwick in 1887. When he was just one year of age, he went with his family to live in the tenement over the Walden station at Walden Heights where his father served as station agent. His father John H. Pressey began learning the craft of telegraphy at the St. J. & L. C. Railroad station in Wolcott when he was just 14 and took charge of that station at the age of 17. He faithfully served as station agent in the towns of Wolcott and East Hardwick, taking over for D. C. Farrington at the West Danville station in 1887. After being transferred to Walden, he continued the job of station agent there until failing health forced him to resign the position in 1927.

Perley Pressey spent his entire life around the railroad, learning from his father at an early age. He became a skilled telegraph operator and in 1905 was appointed station agent at the West Danville station. On occasion, he would fill in for his father at the Walden station and also served in Wolcott for a short time. He was so well liked by the residents of West Danville, that in April 1908 he was given a surprise party in celebration of his 21st birthday. When Pressey was called to fill in for his father at the Walden station, Anson B. Hoyt, editor and publisher of the North Star newspaper in Danville in about 1888, was called on to fill in for him. Hoyt regularly filled in at the Danville and West Danville stations when called on.

Pressey was appointed station agent in Danville in August 1927 and moved to Danville with his wife Bertha. Shortly after he began his position in Danville, he was completely cut off from work for two weeks during the disastrous flood of 1927, when service on the railroad was suspended due to flood damage.

One of the big events each day in the 1930s, especially for those who lived on Railroad Street (Peacham Road), was hearing the horse and wagon come down the road with Bert Leighton holding the reins. With the sound of the train whistle in the distance, the horse slowly plodded along towards the railroad station as Leighton gave a friendly wave to kids along the way. The horse would patiently wait beside the platform while Bert and station agent Perley Pressey discussed the local news while waiting for the mail train to arrive. After the mail bags were unloaded from the train and onto the wagon, the horse would slowly make its way back to the Town Hall where the post office was located at that time.

In later years, Howard McNaughton, who owned the filling station in Danville village oversaw picking up the mail at the railroad station and delivering it to the post office.

At the Caledonia National Bank in Danville during the 1940s, cashier Asa Wesson would listen for the sound of the whistle announcing the arrival of the mail train at the station each day. This was the signal that the mail would soon be ready at the post office and he would send one of the bank employees across the street to pick it up.

Long-time Danville residents Emerson Lang and Larry Cahoon, recalled the days when they loved to spend time at the Danville station and watch the trains pull in. Emerson remembered being instructed when he was a young boy about the very real “suction” that occurred as the huge engine pulled past. He was told to stand way back away and against the wall of the building. As he grew older and more daring, he and his friends found it fun and exciting to place pins and pennies on the track to see what would happen when the great wheels of the big locomotive ran over them. They were so anxious to see the results of their experiment, they got right down under a car to locate a specimen. Just as they did, the train slowly backed up a little and the boys made a wild scramble for the platform. The conductor spotted them and gave them an explicit description of what would happen if he ever caught them down there again. Section workers on the railroad regularly checked the tracks for any kind of debris or obstructions, as even the smallest object could cause the engine to be thrown from the track.

Debbie Emmons Prevost grew up on the Danville Green and she and her friends loved to hang around the railroad station watching Pressey send and receive messages and train orders to and from the dispatcher using Morse code and listening to the tap tapping of the telegraph machine. They used to put various objects on the rail before the train would come, usually two nails crossed over each other to make a miniature pair of scissors or a penny for her father to drill a hole in the middle to make a necklace.

Pressey was always welcoming to local kids who loved to hang around the railroad station. They were fascinated to watch his fingers skillfully compose messages on the telegraph machine using a series of clicks to form words. If there was a message that needed to be relayed to the station agent from the engineer and no need for the train to stop at the station, the engineer would attach a message to a wooden hoop and throw it from the slowly moving train. For any kids who happened to be around, it was a special treat to retrieve the hoop with the message and bring it to Pressey. This would earn then a reward from the station agent’s well-stocked candy drawer. When the supply was running low, he would give the kids some money to run across the street to Delmar Smith’s store to replenish his supply.

Next month’s final article on “The Day of the Depot Part III” will relate some interesting stories about the final years of the “friendly station agent” and memories of the last days of the regular passenger trains that ran through Danville.