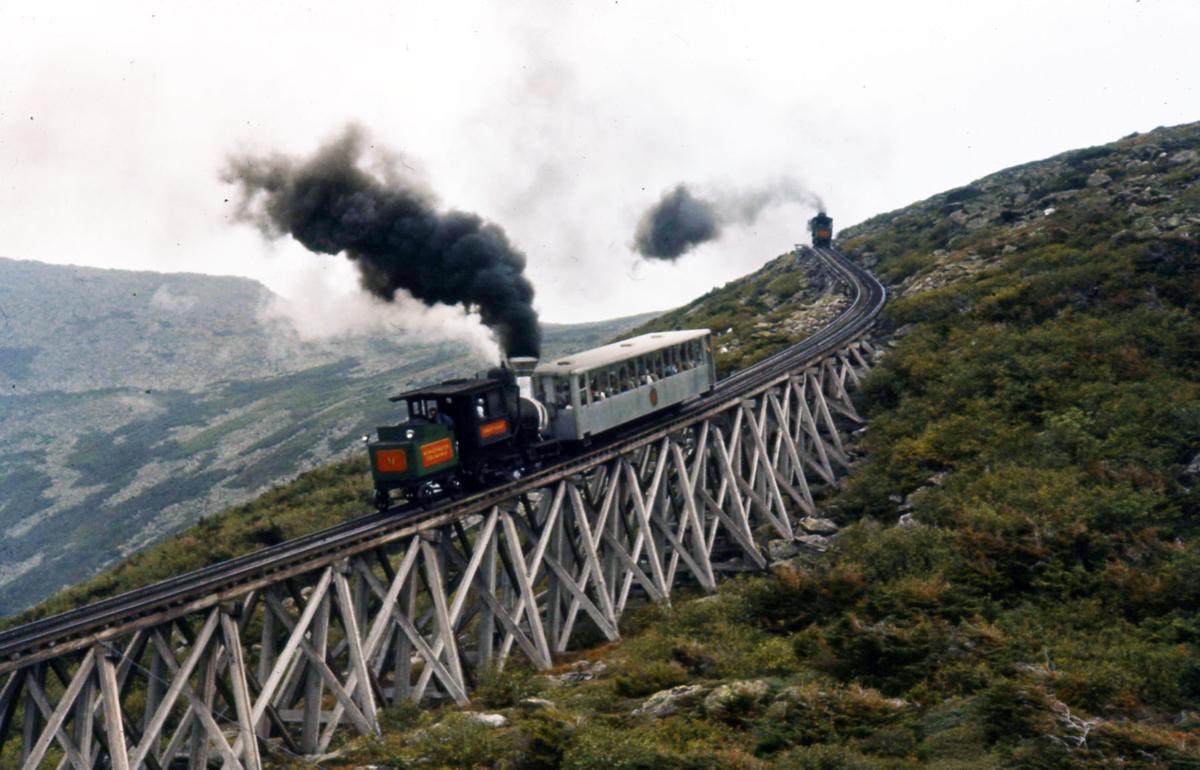 The No. 6 steams up and over Jacob's Ladder. 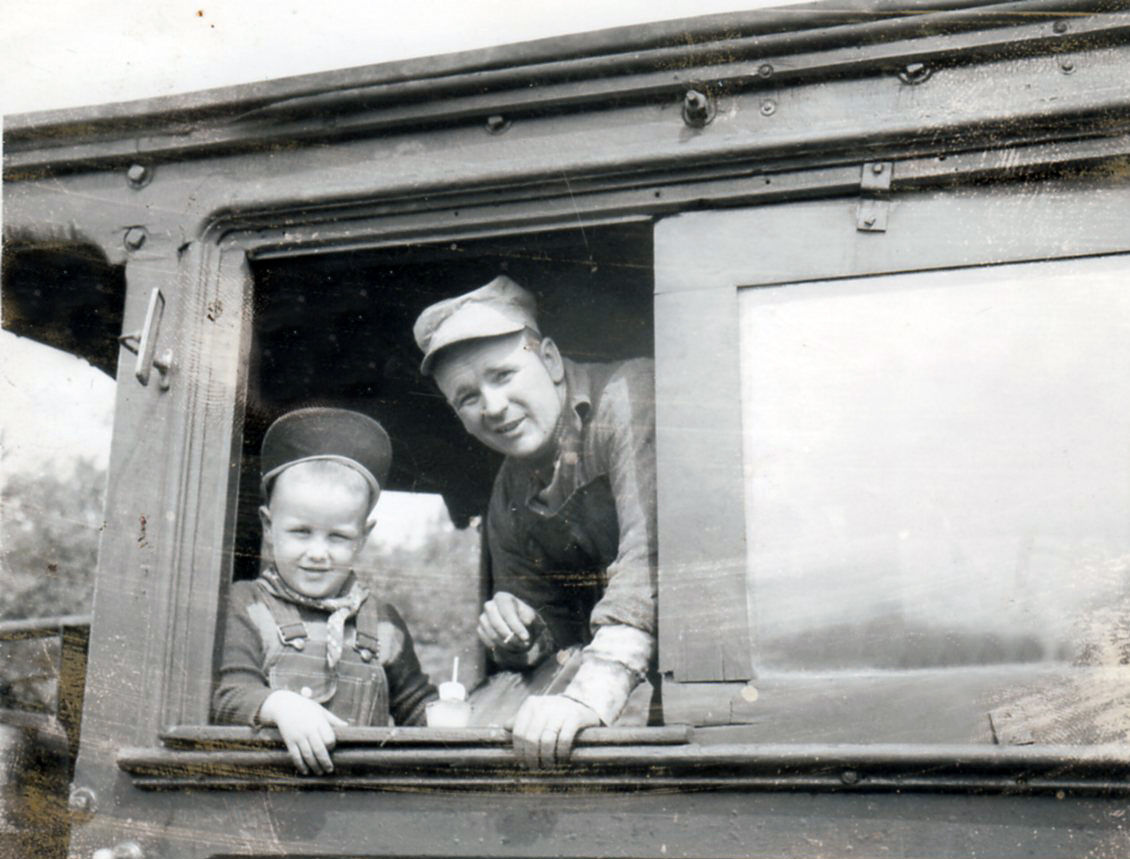 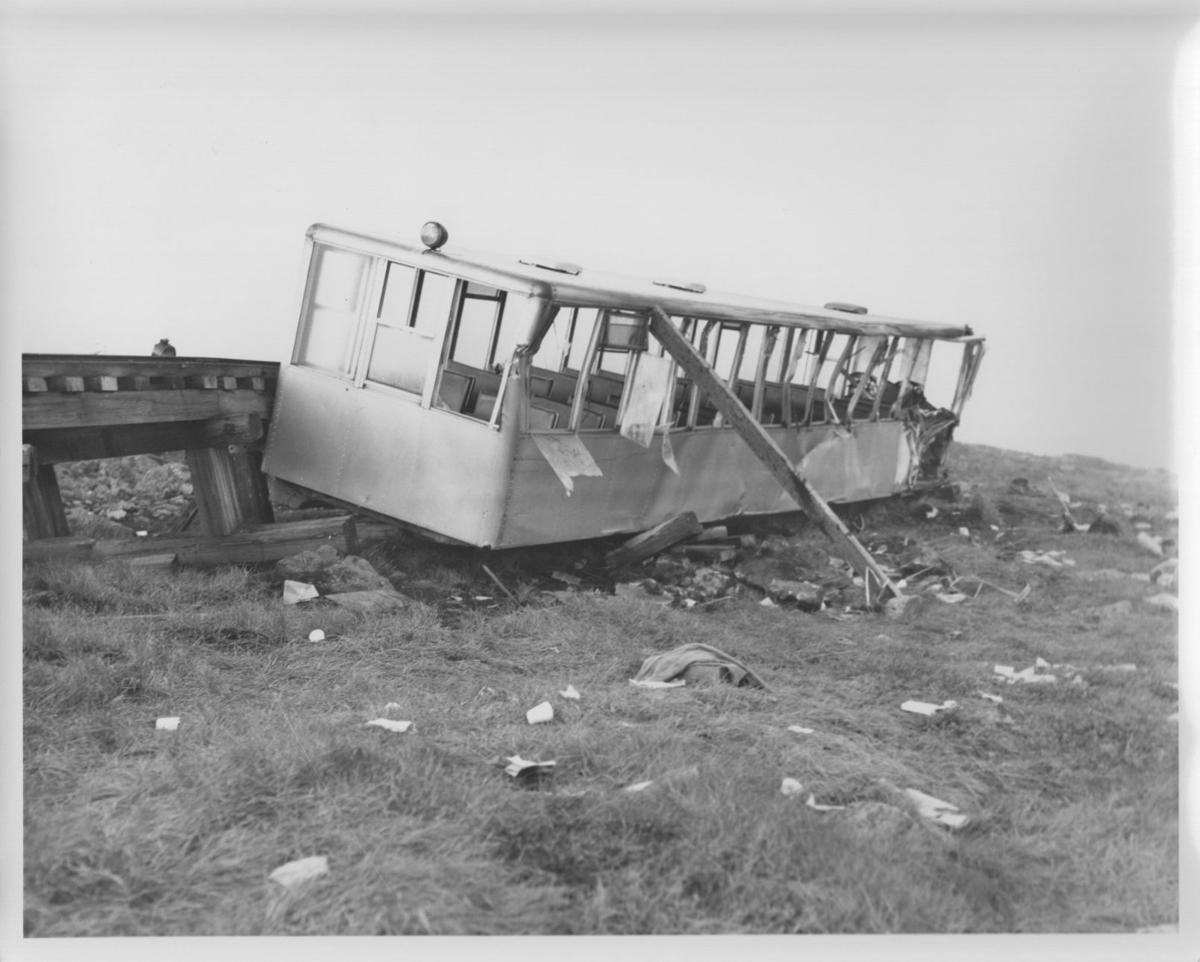 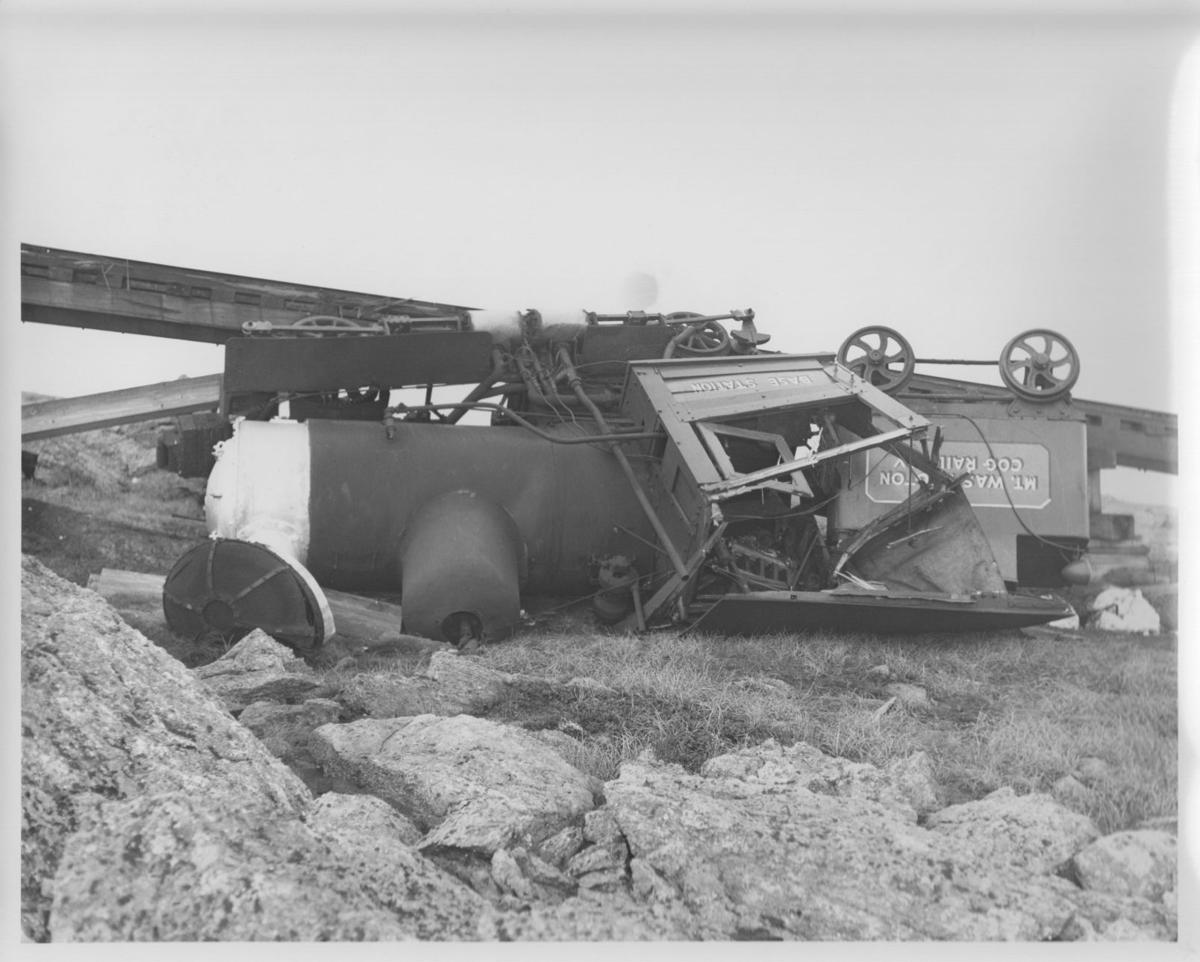 The images above were taken by George Hester, of the New Hampshire State Police Criminal & Photographic Laboratory, on Sept. 19, 1967  following the 1967 crash that killed eight people. 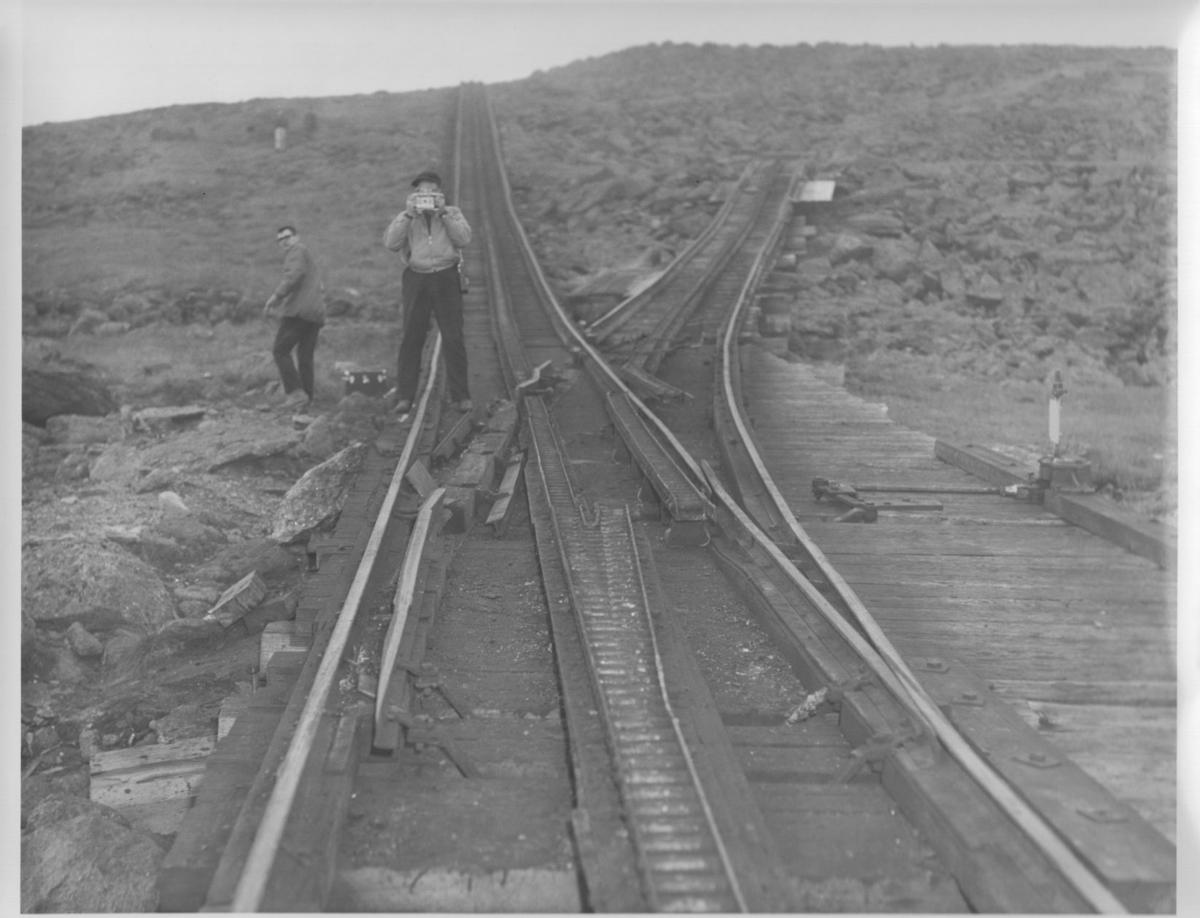 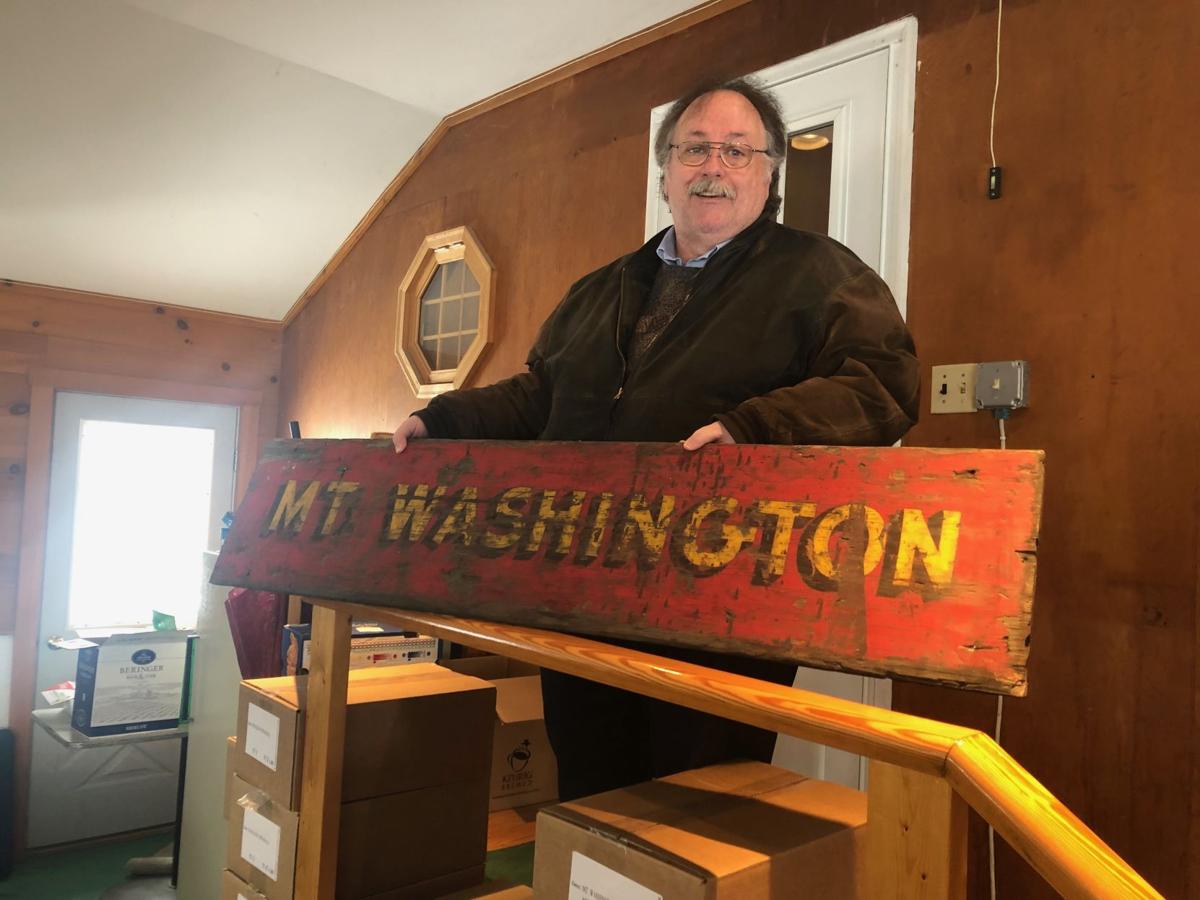 Danville's Tim Lewis holds up the sign for the Mt. Washington engine. 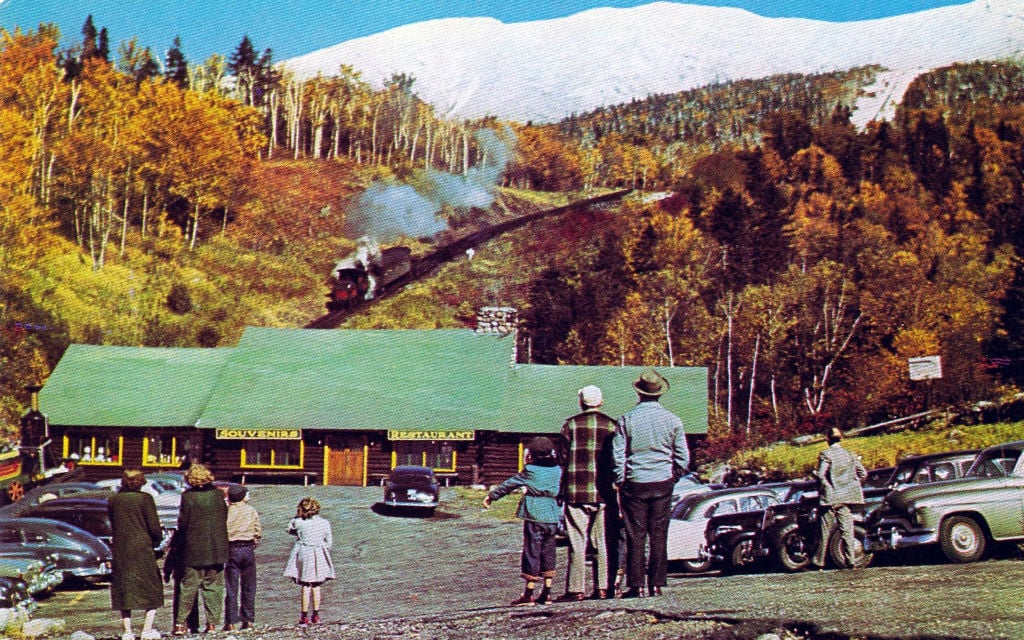 The Marshfield Base Station in Bretton Woods, N.H. in the 1950s while the Lewis family lived and worked at the Mt. Washington Cog Railroad. 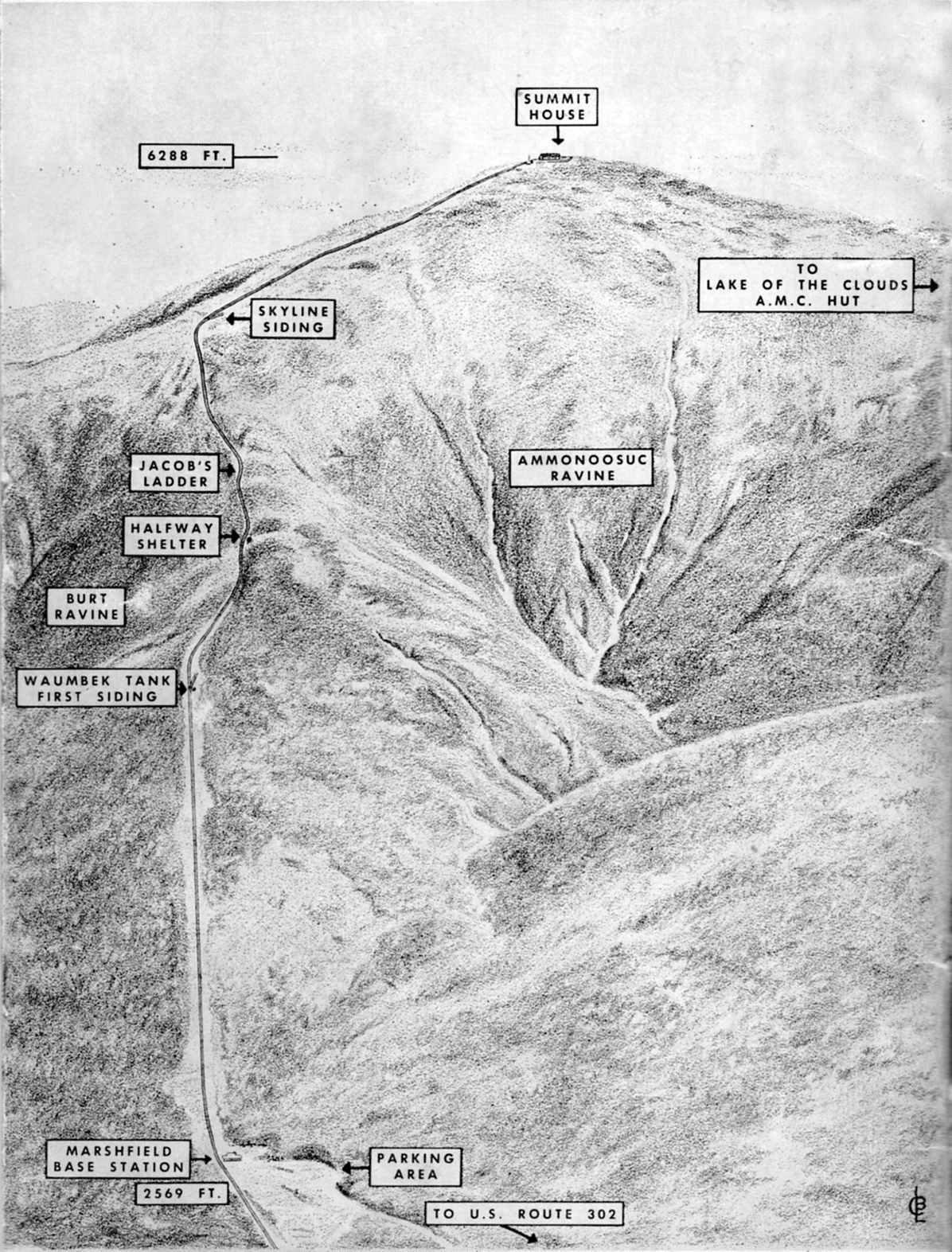 An illustration showing the geographic locations and landmarks along the 3-mile route to the summit of Mt. Washington. 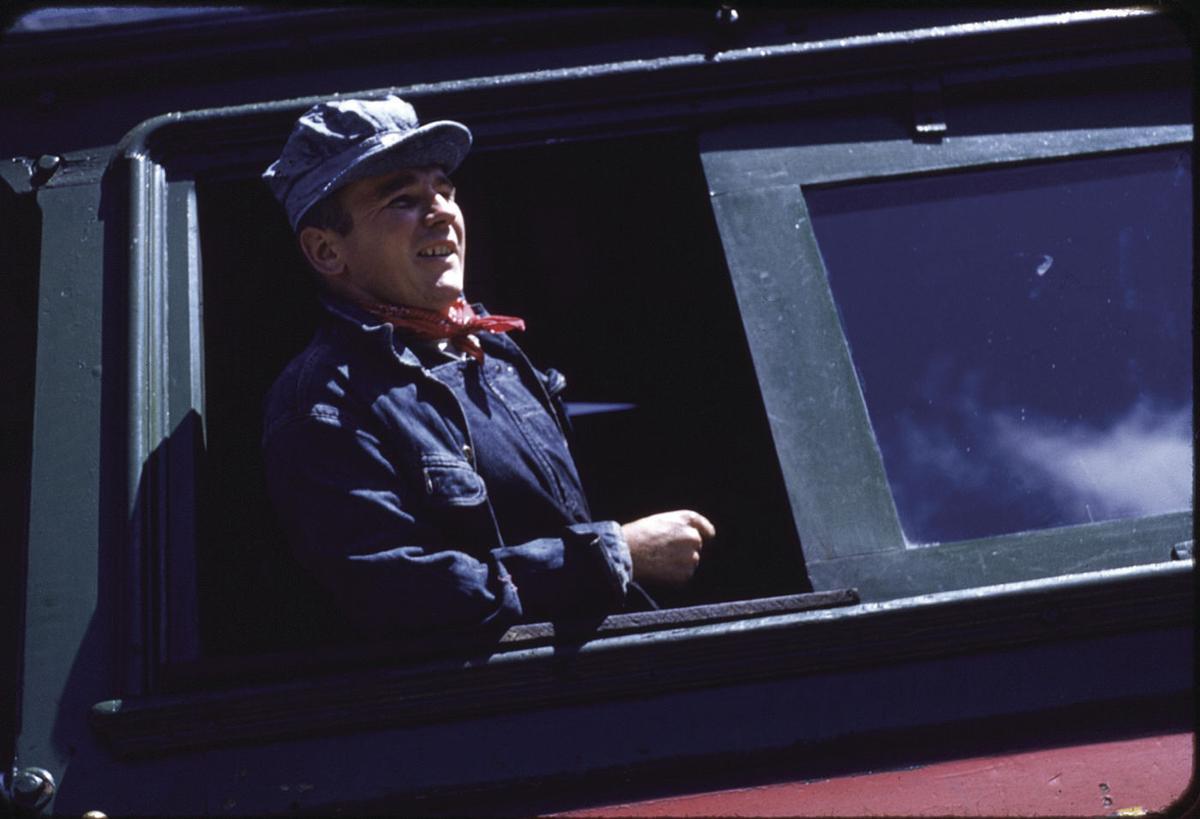 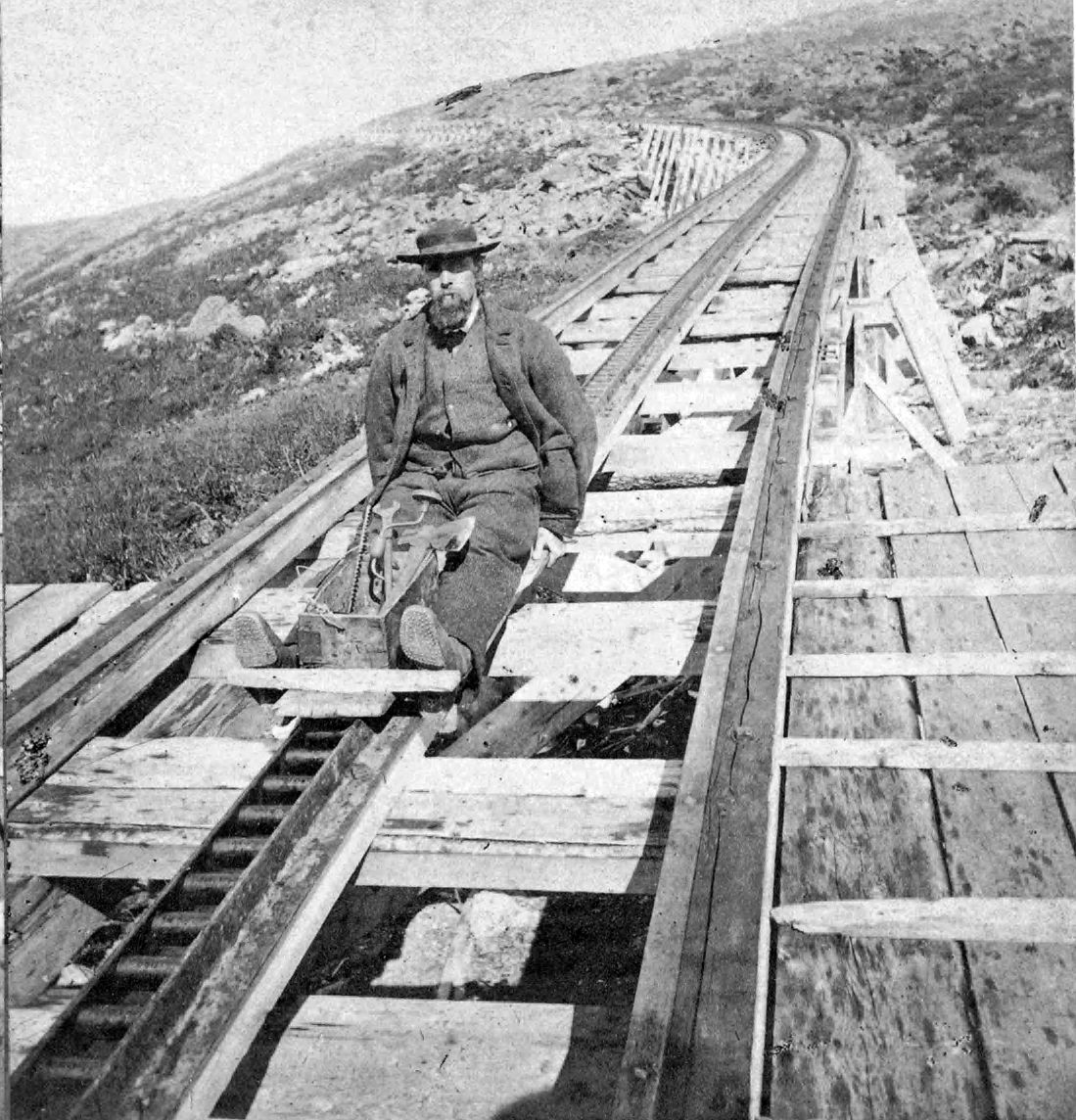 The "Devil's Shingle" was an improvised method of descending the mountain quickly and dangerously. They were banned repeatedly in the early 20th century, but reports vary on when they actually stopped being used. 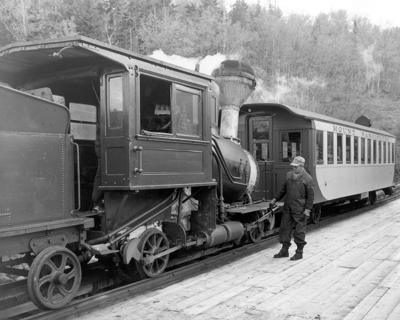 The No. 6 steams up and over Jacob's Ladder.

The Marshfield Base Station in Bretton Woods, N.H. in the 1950s while the Lewis family lived and worked at the Mt. Washington Cog Railroad.

The Mt. Washington Cog Railway, the first of only two mountain railroads in the U.S., had an exemplary safety record for its first 98 years, considering that it was built to claw its way up steep slopes and straddle deep ravines to the top of the tallest peak in the northeastern United States. Then came 1967.

Over the course of a few months, misfortune and tragedy beset the mountain railroad and its owners. In early June, damage to a summit hotel caused financial hardship for owner Col. Arthur Teague. Soon after, “The Colonel,” as he was referred to, suffered a heart attack. On Aug. 4, following a meeting with his lawyer and accountant, he took his own life. Ownership passed to his wife, Ellen. Two weeks later, while on route to a horse show in Keene, N.H., a car crash took the life of the Teagues’ 14-year-old daughter, Lucy. On Sept. 17, a misaligned switch in the cog track caused a derailment that killed eight passengers, including three children.

The rack and pinion mechanics of the Cog were designed and built in the 19th century by the Cog’s first owner, Sylvester Marsh. In between the two rails, a toothed rack rail accepts the cog wheels fitted to the locomotive and passenger car. The locomotive pushes the passenger car up the mountain and descends the mountain by going in reverse. During descent, speed is controlled by air compression in the engine's cylinders and brakes. It takes about an hour to make the nearly 3-mile climb, and an hour to descend.

From the Cog’s first passenger trip in 1868, through 1967, there wasn’t a single death to a paying customer, though several Cog employees weren’t so lucky. Many of these deaths were the result of slide boards, which were used from the 1870s through the early part of the 20th century for quick descents by individual employees down the track. They came to be known as the “Devil’s Shingle.”

Insight into the sequence of events leading up to 1967 has been provided by two Danville residents, Norman “Jitney” Lewis and his son Tim, who knew the Teagues intimately and worked for them on the Cog. Tim is a professor of electronic journalism at Northern Vermont University – Lyndon

Together, they produced a three-volume treatise on the Cog that extends to thousands of pages and provides a highly-technical operations manual, as well an inside perspective on the history of the mountain railway and its employees, some with local ties.

Jitney’s family spent 18 summers in Bretton Woods, N.H., where he worked as a “Cogger,” as employees of the railroad are known. In 1950, Jitney was attending Lyndon Teacher’s college, the institution that would become Lyndon State College and now Northern Vermont University – Lyndon. His roommate, George Trask, gave him his nickname for his jitter-bugging ability at the local dance hall. Trask also introduced him to The Colonel, who soon hired him. Through 1967, Jitney was responsible for taking passengers safely to the mountain’s 6,288-foot summit and down again. He spent his summers at the Marshfield Base Station – alone at first and later with his family.

Jitney’s last summer at the Cog was 1967, when he signed a 12-month contract to be assistant superintendent at a school in Chester, Vt. He left prior to the 1967 crash, but beforehand, according to Tim, his father walked and inspected the entire track. Jitney’s final report said, “the only possible cause for an accident on the line in the future would be human error as the track, the locomotive, and car mechanisms, as well as operating procedures, were sound if maintained and followed.”

On Sept. 17, 1967, the No. 3 Base Station engine and an aluminum passenger car The Chumley, left the summit with more than 80 passengers around 5:10 p.m. The locomotive was in front of the passenger car backing down the track. On board were an engineer, an engineer in training, a fireman and a brakeman. On the descent, the Base Station met an ascending train at Skyline Switch, one of three switches designed to allow trains to pass each other.

As the train reached Skyline, it slowed down but didn’t stop. The crew assumed the switch had been left in the correct position. But it wasn’t. When the engine hit, both the front and rear cogs were forced out of the rack. The engine left the tracks and tumbled to the rocks below, leaving the passenger car in an runaway slide down the tracks like a seven-ton sled. Roughly 500 feet later, at 35 miles per hour, the car left the track and smashed onto its side.

New Hampshire Public Utilities Commission Director Winslow E. Melvin investigated the scene and published a report on Sept. 22. He confirmed the switch was misaligned and caused the accident.

“It is our conclusion that the primary cause of the accident was human error,” Melvin wrote, “and not due to any structural or mechanical deficiency of the railroad.”

In the days following, media and politicians across the region debated the safety of the railway and out of state firms were hired to conduct additional investigations into the crash.

Ellen Teague established a new policy that required all engines to come to a complete stop at all switches and a visual inspection made. Eventually, the switch system was replaced altogether.

On Oct. 2, the Rutland Herald sent reporter Howard Coffin, now a well-known Vermont historian, to cover the recovery of the Base Station engine. The efforts were led by Pliney Granger Jr. (see sidebar) to put the wrecked engine back on the rails and bring it down the mountain for repairs. Coffin recalled that story for Vermont Public Radio on the 50th anniversary of the accident. “Rutland Herald editor Kendall Wild assigned me to the story. And with a 35-millimeter camera and notebook, I reached the railway’s base station around eight the next day on a warm cloudless morning. Railway officials told a crowd of reporters that no access to the wreck site was allowed. Yes, an engine and flatcar were going up to bring the wrecked engine down. But the injured and dead had already been evacuated. So as the work train began to chug toward the mountain I leaped onto the flatcar. I was the only reporter who did, and by then the train was going so fast the engineer and crew had to tolerate me. Fortunately, I’d brought my parka. It took four hours for the crew to get the engine back on track – while it took just minutes for the sunny morning to turn to 80 mile an hour winds and driving snow. On the trip down, as we crossed the famed Jacob’s Ladder trestle, the wrecked locomotive started to ride up over the flatcar. And for one terrifying moment, it seemed we might have to jump 60 feet to the rocks below or be crushed by the engine. But the men got the wrecked locomotive under control. On approaching the base, I jumped from the train before it stopped, and got away with my notes and camera. Next morning the Herald had the first pictures taken at the wreck site, all over page one. Such was what Ken Wild’s Rutland Herald expected of its reporters. I vividly recall seeing the battered engine on the jagged rocks as the gales and driven snow of the most sudden winter in memory roared in – and a woman describing how she’d survived in the wreck for three hours, trapped beneath the body of someone who had not.”

A mystery still endures: what happened to the switch at the Skyline Switch that caused the 1967 derailment?

Throwing a switch was not an easy operation in those days. According to Melvin’s report, there were nine separate steps that had to be followed.

What happened in those 75 minutes? Did someone come along and change the switch? No one knows.

Slide boards were invented to provide fast transportation from the summit to the base station. The three-foot-long boards were grooved to rest on the center rail. Speed was controlled by a braking system that included handles on either side of the board that when pulled, the board would grip the flange of the rail tightly. Experienced riders were said to be able to make the trip in around three minutes, at a speed approaching 60 miles an hour over high, steep wooden trestles. Slide boards were also used at night and during the winter.

In 1876, the Washington (DC) Evening Star reported, “In the eight years that the road has been run there has been no accident resulting in the loss of life, though two or three of the railroad workmen have been killed in attempting to slide down the rails on boards fitted with rude iron runners to the center-rail, and regulated by a brake of like simple construction. Notwithstanding the danger of a descent in this way it seems to have a great fascination for some, and in our ascent we met several persons coming down on these sleds. As we approached they stopped their odd vehicles and detached them from the track; resuming their downward flight when we had passed. They are all right “while the breaching holds,” but when that gives out it is the last of earth for the unfortunate sledder.”

While Jitney Lewis was engineering and serving as operations manager for the Cog in the 50s and 60s, his son Tim was publishing “Cog Clatter,” a weekly newspaper chronicling the lives of Cog employees, which in those days, numbered as many as 180 per season.

At the prompting of his boss, Jitney produced “Brake – Fire – Run," and "Cog From a Safe Point of View," two works that were handed out to employees. Col. Teague wanted to ensure train crews all received the same basic information. Jitney also began working on a highly-technical operations manual, but didn't finish it before departing the Cog. According to Tim, his father was a serious student of Mount Washington Railway steam train operations and worked at the Cog to supplement his G.I. Bill benefit and underwrite his education. Aside from his summers at the Cog, Jitney was a teacher, mainly in the Vermont towns of Chester, Springfield, Newport, and Derby. He retired to Danville when he found a property with ample storage for his vast collection of historical items, memorabilia and Cog artifacts.

As part of the deal for finishing his manual, Jitney suggested Tim expand on the work he began with “Cog Clatter.” Tim agreed and enlisted the help of past employees for more information. The result was the 241-page “Mt. Washington Cog Railway Roster: The Jitney Years Plus.” This crowd-sourced roster of employees and their stories is constantly expanding as Tim continues his research. At last count, he has over 2,000 names and is working to bring a comprehensive database to the internet.

Tim has been traveling around the region promoting these works. His next presentations are scheduled for March 31 at the Danville Historical Society at 1 p.m., and April 18 in St. Johnsbury as part of the Osher Lifelong Learning Institute series at Catamount Arts in St. Johnsbury at 1 p.m.