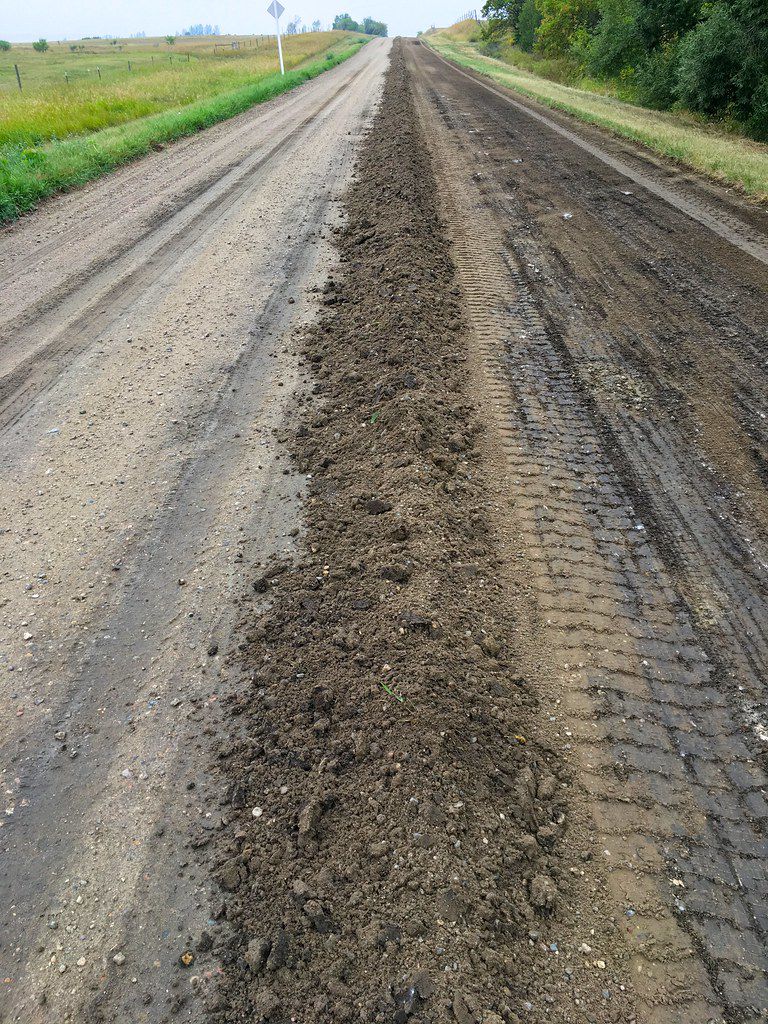 A grader path on one side of a gravel road. 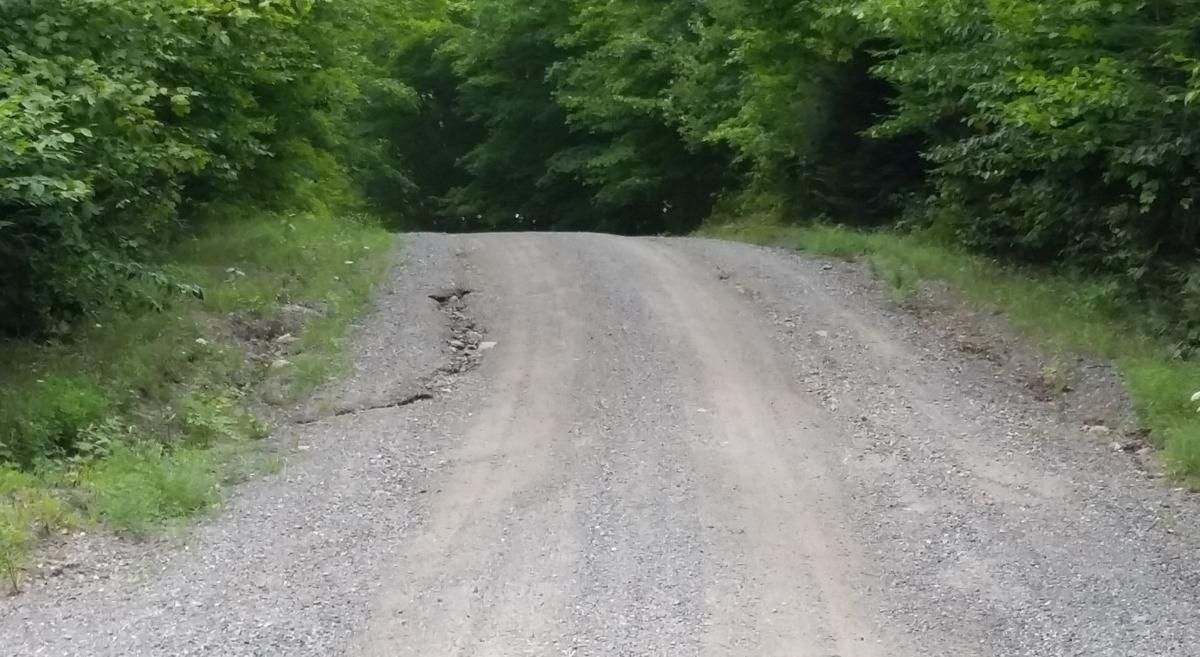 A gully next to the ditch on a road that is too wide to grade effectively.

Last month I wrote about local roads, their classifications, vulnerabilities, and culverts. This month I’ll examine how gravel roads are put together and how are torn apart.

A good gravel road is constructed of three different layers. The subgrade or roadbed is the bottom layer made up of the native material or “fill,” which is brought in. Then comes a base layer, ideally 18 to 24 inches deep, constructed of coarse gravel or crushed stone. Finally, the surface layer of uniformly graded gravel or crushed stone is placed on top and is at least 8 inches in depth. The fine particles (fines) in this layer fill the voids among the coarser particles and act as a binder to provide a tight, dense layer that allows for the efficient shedding of water from the surface. Often stabilizing agents such as calcium chloride are used to maintain a certain moisture content in the fine materials that allows them to maintain a strong bond with the aggregates. That helps keep them from blowing or washing away.

The ideal structure of a gravel road is seldom achieved. If it were, we would not suffer potholes, washboards, and gullies. Most of our roads have no planned structure; they have evolved over time. Mud holes get filled with stone and storms leave gullies that are filled in. The best affordable gravel is added to the top as time and budgets allow.

Did you ever wonder how we can continually put more gravel on our roads, load after load all summer, and then do it again year after year? By rights, the roads ought to be 20 feet high. Gravel does build up; today’s class 3 roads have a much thicker bed than their poorer class 4 cousins. Anyone who has plumbed the mud holes of yore realizes that roads today simply have more gravel than they used to. Roads have also gotten wider. Sometimes that is intentional but often it is a result of “gravel creep,” whereby the grader pushes a little gravel off to the side of the road on the last pass. Ditches fill in and the road gets wider.

We’ve used so much gravel on our roads that many pits no longer have any useable gravel left. Even the great gravel pits in Barnet, St. Johnsbury and Lyndon, along the massive Passumpsic Esker, have their limits. This 26-mile long ridge of gravel was once a riverbed within the sheet of ice that covered our landscape some 12,000 years ago. Only remnants of the esker now remain and we’re steadily tearing them down to use their ancient gravel on our roads.

Straight out of the pit, gravel generally has cobble-sized stones in it, and often bigger rocks. This type of “bank run” gravel can be used in a road base, but not for the surface layer. Most towns buy gravel that has been crushed, a process whereby gravel is scooped up by a loader, dumped into a big machine that literally crushes the rocks in the gravel until the fragments are small enough to sift through a screen of a chosen size. Towns might use a screen of an inch and a half for rough work and three-quarters of an inch for the surface layer that the grader will be shaping and smoothing. The best gravel has a range of particle sizes, allowing it to pack well as we drive on it.

As gravel pits have run out, more expensive material from rock quarries has become common. Quarries start by blasting a solid rock face. A skilled dynamite artist can evaluate the rock and set charges to break it into whatever size is required. For road gravel, the initial blasting should thoroughly pulverize the rock, leaving a pile at the base of the rock face that already has a good mixture including plenty of fine rock dust. The pile of blasted rock is then scooped up and run through a crusher just like in a gravel pit. The resulting material is excellent for roads. It’s often called stay-mat or sure-pac, or more specifically “¾ inch minus” or “1-1/2 inch minus” to reflect the maximum size of the rock.

The reality is that too much of the expensive gravel we haul in to fix our roads washes away, ending up in turnouts, in the woods or fields beyond, or in the nearest stream. Some erosion is inevitable, but it can be minimized. Water is predictable; it runs downhill. The farther it runs, the more power it has to pick up and move gravel. The object is to get water off the road as quickly as possible. The first step is to crown the road. In other words, shape the surface so that the middle of the road is higher than the edges. If the traveled width of the road is ten feet from the center to the edge, the center of the road should be five to seven inches higher than the edge. On a steep hill, water more easily runs down the length of the road so you need more crown to send it off to the side.

Once the water runs to the edge of the traveled road it needs to get into the ditch or a turnout, and this is where the most common problem occurs. If the grader has left any kind of ridge along the edge of the road, the water running off the crowned surface will hit that ridge and turn to run down the length of the road. In a hard shower, the result is a gully down the edge of the road, even with a good ditch right next to it. A properly graded and raked road maintains the slope from the crown all the way to the ditch. Sometimes, the road is too wide for the grader to accomplish this efficiently. In which case, the grader needs to work hard at the edges to pull gravel back into the middle, narrowing the road a little and building up the crown. We all tend to drive in the middle of the road, thus compacting the middle more than the edge. If the crown wasn’t sufficient, the edge ends up higher than where the cars drive which is a recipe for disastrous erosion.

Ditches themselves can erode in hard rains, and that is why we are seeing many ditches lined with rock, a practice encouraged by the state to minimize sediment in streams. Turnouts are essential to let the water spread out into the fields or woods. On a steep hill there should be a turnout every 50 feet. The last step after the grader and rake have gone through is to make sure all the turnouts are open.

So why not pave the roads? Vermont has a much higher percentage of gravel than any surrounding state. To a certain extent, I think we like the idea of gravel roads and they fit into our vision of rural life. The major reason, though, is cost. Preparing a road to be paved is very expensive, and the paving even more so. In our climate, we are lucky to get 10 years before a road needs to be re-paved, once again at great expense. When I was on the select board, I did an analysis of the long-term average cost of pavement versus gravel, taking into account all the costs of equipment and maintenance of a gravel surface versus the periodic costs of new pavement. I concluded that a paved road costs the taxpayers at least five times as much as a gravel road.

The use of stay-mat on roads can result in a surface that is almost like pavement. With the right moisture content, this type of gravel will compact very well. Some towns are investing in vibratory rollers such as you see on big road construction projects. These are the ideal machine for compaction and running them over a freshly-shaped and graded road can result in a very hard, smooth surface that can last through an entire season without re-grading. It’s a big initial investment but can mean big savings in grading and gravel hauling.

Managing gravel roads and the people who drive on them is the toughest job in town, and it never ends.