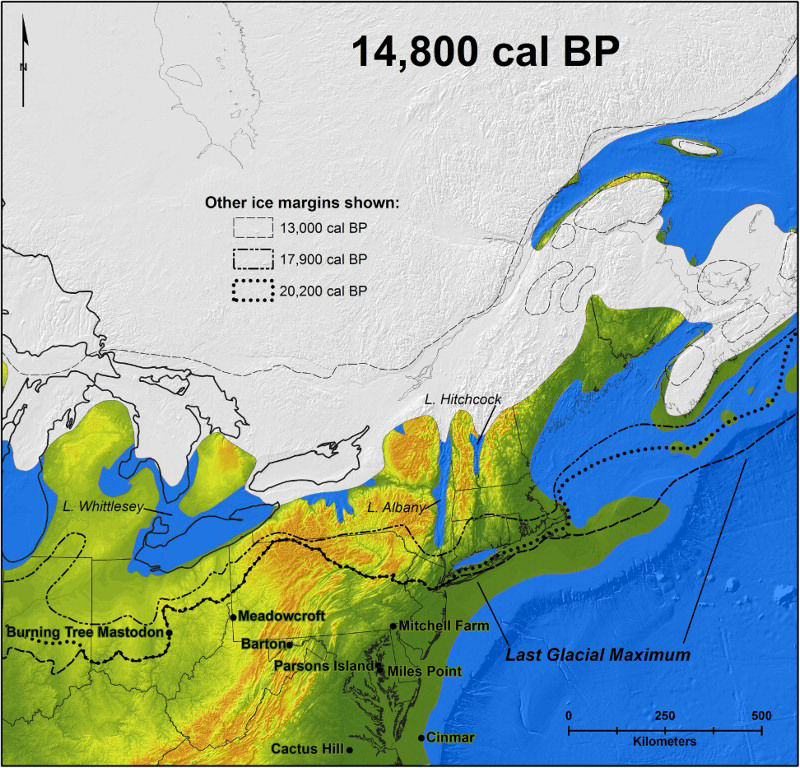 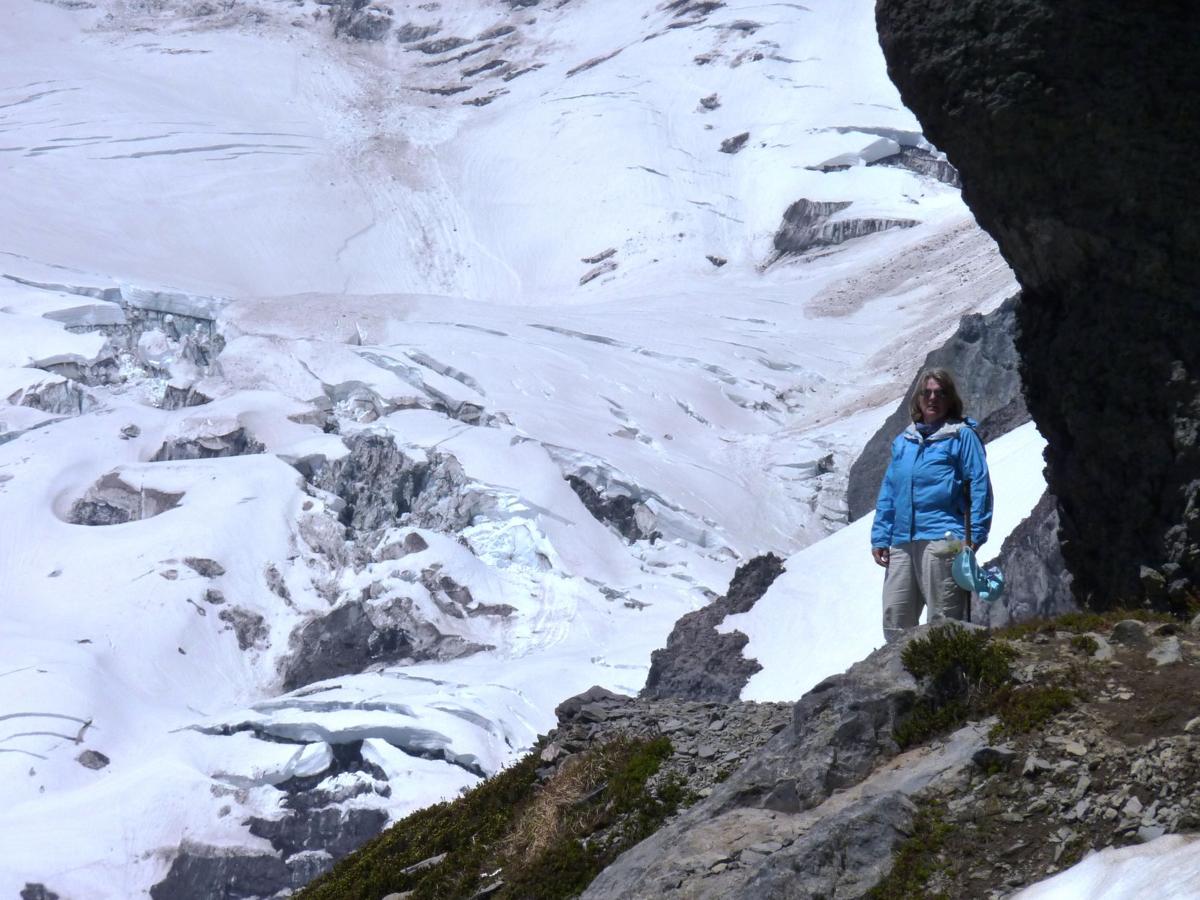 Overlooking the rotting ice of a retreating glacier on Mt. Rainier, Washington.

Imagine a rotting wall of ice hundreds of feet high just north of Lyndonville. About 12,500 years ago, if you were on the hill where Northern Vermont University now sits, you would be looking out over a gray-colored lake that extended clear across the valley to the Outing Club, and north to the toes of the glaciers that filled the valleys of Millers Run and the East Branch of the Passumpsic River, curling around Pudding Hill. The water level is not too far down the hillside below you, above what is now I-91. Turning your head to the south, the lake stretches around a couple of islands (Now Minister and Prospect Hills – where the cell tower is now). As far as you can see, the lake stretches south, filling the valley wall to wall.

Hopping in a canoe and paddling south, you are helped along by a north wind flowing down off the ice. After a few hours you pull up on an island – what is now known as the Knob in St Johnsbury. To the east an arm of the lake extends out of sight up what we know as the Moose River valley, and to the west up the Sleepers River valley nearly to North Danville. All of what is now settled St Johnsbury is underwater. The hills rising from the lake are bare and rocky with boulders sitting in odd spots all over the place.

If you continued south you would travel a narrow lake that branched upstream valleys including Joes Brook almost to Morses Mills, and the Stevens River toward East Peacham. The church in Barnet Center would have been just under the surface of the water. This far from the roaring outlets of the glacier, the water would no longer be milky gray, but more turquoise in color, because coarser sediment had settled out north of here and only the fine clay particles were still suspended in the water.

This was Lake Hitchcock, a body of water that filled the Connecticut River valley down to the middle of Connecticut. It was “temporary”, lasting only a few thousand years – a blink of an eye in geologic time. How, when, and where Lake Hitchcock existed has been the subject of imagination, research, and disagreement for nearly 200 years.

You can’t research Lake Hitchcock without researching the retreat of the ice from its southern terminus at Long Island, beginning about 23,000 years ago, reaching St Johnsbury about 12,000 years ago, and on northward to Hudson Bay about 8,000 years ago. This is not simple detective work. There are myriad complications and twists in the plot. Clues are generally buried, though a skilled geologist can often deduce where to dig to find them. These days models can be put together using pieces of data from studies done over the decades. The data are not complete, so assumptions must be made, based on the principles of science or interpolation of discoveries made elsewhere. Where parameters are unsure, models differ. Scientists do not agree on many of the aspects of the de-glaciation of the Northeast and of the formation, existence, and demise of Lake Hitchcock.

We rightfully worry about the climate change that we have instigated in the geologic instant represented by the last 200 years. On a broader time scale, there have been several dramatic changes in the earth’s climate over the billions of years. The “modern” ice age (known as the Pleistocene) reached its peak about 28,000 years ago when the enormous Laurentide Ice Sheet ground to a halt at what is now Long Island. The ice was centered on Hudson Bay in northern Canada and had expanded for thousands of years, pushing its front ever southward until the climate warmed sufficiently to melt more ice each summer than was pushed down from the north. Covering most of Canada and the northern United States, and with a thickness of up to 10,000 feet, the Laurentide Ice Sheet contained a huge volume of water. Along with several other ice sheets on earth at the time, so much water was frozen that the global sea level was 400 feet lower than it is today.

The huge volume of ice weighed down the earth’s crust. A heavy load in a boat will force it lower in the water, and the enormous weight of the ice forced the crust down into the mantle of the earth, which has a plasticity something like silly putty. How much a particular place was depressed varied according to the character of the crust at that point and the amount of ice. There was less ice sitting on Connecticut than there was on the Northeast Kingdom, so we sank lower than they did. In fact, we sank about 700 feet while Connecticut only sank about 150 feet.

About 23,700 years ago, the ice started to melt and the front receded from its southern terminus at Long Island. This was not an orderly process. Some years/decades/centuries were warmer than others, and there were intervals where the ice front stalled at a spot for many years and other colder periods when the ice re-advanced southward. During an early phase of the ice melting, a lake formed at the southern end of the Connecticut River valley, which geologists refer to as Lake Middletown. Then things cooled off for a while and the ice front stalled south of Hartford at a place we now call Rocky Hill, Connecticut. Meltwater continued to pour from the ice front, dumping its heavy load of sediment into Lake Middletown. As with any flowing stream entering a lake, as soon as the flow slowed in the quiet water, much of the sediment settled out, with the heavier particles settling first. Over time these sediments accumulated and a substantial delta formed.

Eventually, the atmosphere warmed enough to melt ice at the front faster than it could be replenished from the north. As the ice front melted its way north up the Connecticut River valley, the delta that had formed at Rocky Hill stayed, acting as a dam. Water began to pool behind it in the depressed valley, and Lake Hitchcock was born, about 18,000 years ago. The lake lengthened over the millennia as the ice melted north. Eventually, Lake Hitchcock reached all the way north into the valleys of Millers Run and the East Branch of the Passumpsic.

The primary way scientists have deduced these dates and locations is through the presence of “varves” in sediments that remain from those days of glacial melting. Varves are distinctly layered deposits in glacial lakes. In the summer, when the meltwater is fast and furious, more and coarser sediment is carried into the lake. In winter, less water comes in and the finest clay particles have a chance to settle out. This happens year after year, and layer after layer forms, with each couplet representing one year.

Lake Hitchcock drained away from the Passumpsic valley about 12,200 years ago, although that timing is confused by different methods for counting years, and the fact that the ice front had re-advanced to Bethlehem, Littleton, and East Barnet a few hundred years earlier. It seems likely that the ice front melted, re-covered, and then melted again from this area. However the timing played out, at some point the ice melted north for good, and the Passumpsic River and all its tributaries that had been flooded by the lake, cut their way down through the sediments left in the bed of former Lake Hitchcock. Most of the varved sediments were eroded and carried to the sea, but today varves are found along what were the edges of Lake Hitchcock from Wheelock all the way to Connecticut. Painstaking analysis has allowed scientists to correlate patterns of varves to actual years, and thus assign dates to Lake Hitchcock in its various phases, which in turn tells us the progression of the ice front as it melted northward and the valley filled with water.

Ever since learning as a young man of the history of the ice ages I’ve wondered what our region was like as the ice melted and a brand new land surface was revealed. I have visited glacial margins where ice has retreated in the last few decades; at Torres del Paine in far southern Chile, around Mount Rainier in Washington state, in the Canadian Rockies, and in Iceland. Post-glacial landscapes appear over decades and centuries, and I have no doubt humans witnessed that process as it unfolded here in Caledonia County. It is fertile ground for the imagination.