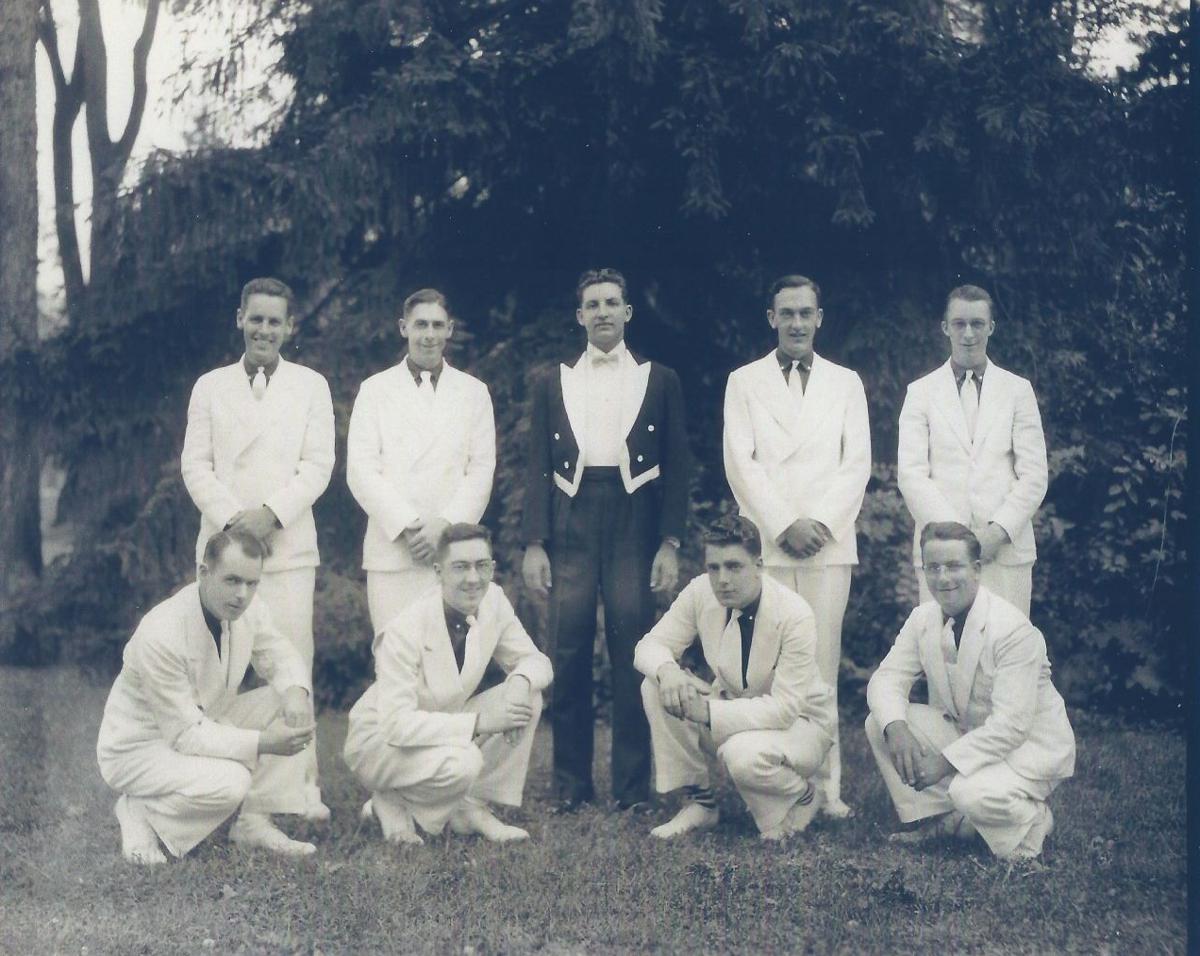 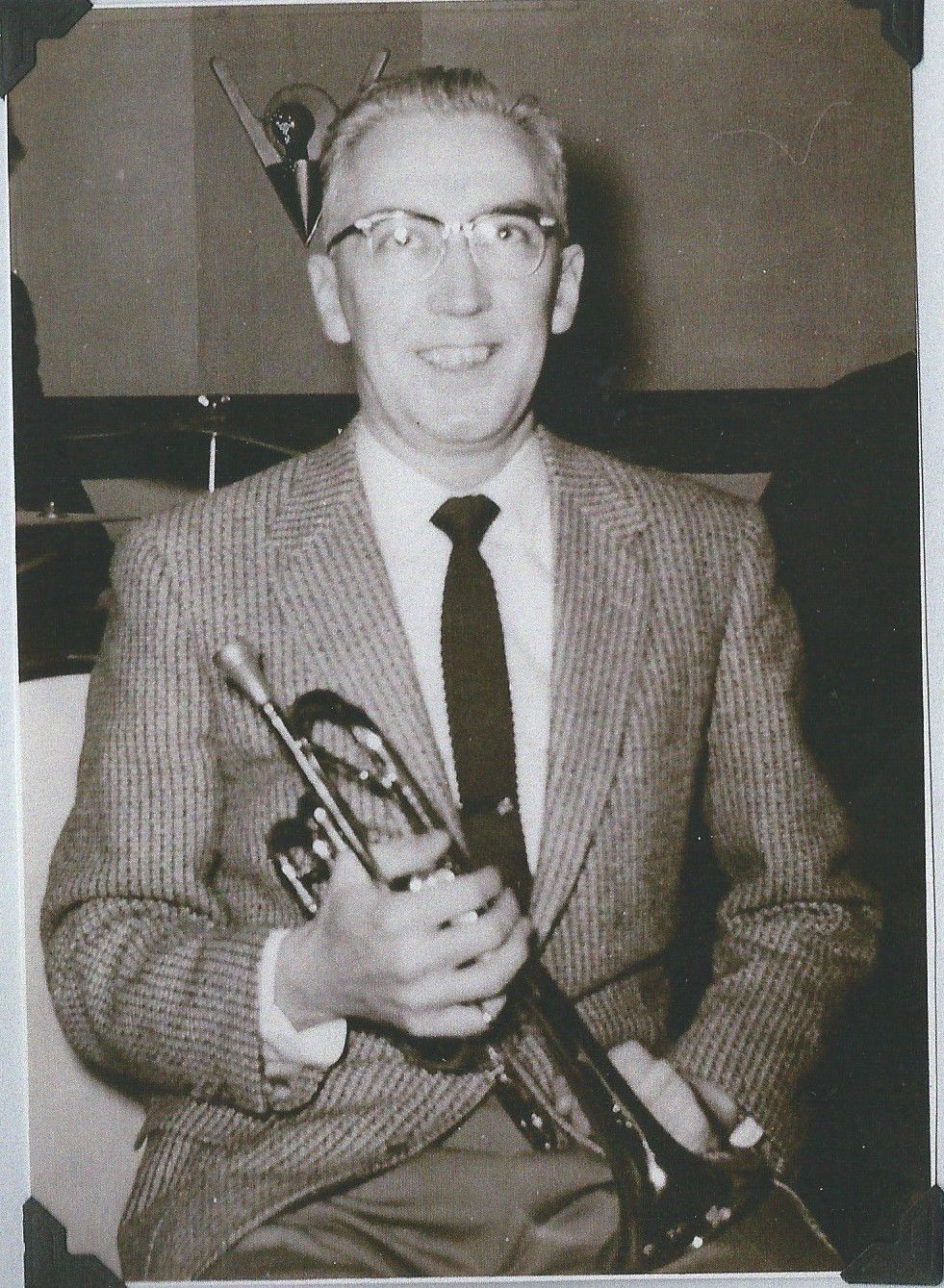 Cliff Greenwood and his "horn," from the glory days of local dance bands that played at Boomer's.

Andrew Boomer and his building are long gone from the St. Johnsbury scene. But memories of the dance halls and dance bands live on. One group with many joyful recollections, and some great photos, is the family of trumpet player Cliff (Clifford T.) Greenwood, who lived in Lyndon Center, Lyndonville, and Burke (born in 1914; died in 2004).

Cliff’s son Paul recalls that his dad loved music so much, and played so well, that as a sophomore in high school at Lyndon Institute, he even taught music there! He graduated from LI in 1933 and worked for the Canadian Pacific Railroad for 28 years. But music held his heart.

Cliff often played (“sat in”) with other musicians. He played with H. Guy Dunbar’s dance band in the late 1930s to mid 1940s. Others included the Ray Conniff Orchestra and the Marshall Morrill Band. He’d come home happily to his family and say, “I got a dance job tonight.” Paul says that for many years his dad played every Saturday night at the American Legion on Maple Street in St. Johnsbury, and on Fridays at the Elks Club and other local spots.

In 1949 the Cliff Greenwood Band even played for the very first dance allowed for St. Johnsbury’s Catholic all-girls school, Mount Saint Joseph Academy. At the nearby St. Aloysius (Catholic) Church, now St. John the Evangelist, the band leader who loved music so much became the choir director, a post he held for 30 to 40 years. He even arranged the music for masses held there, as well as directing an a cappella choir that sang Gregorian chants.

Another significant performance was in 1956, when the Cliff Greenwood Trio played at the Lake Morey Inn (Fairlee, Vt.) for the 30th reunion of the Dartmouth College class of 1926. They played 1920s dance music and thrilled the crowed. For the band members, another thrill came afterward when a thank-you note arrived from Robert L. May, one of the people celebrating that night. Mr. May praised the music and the great feel of the evening – which felt amazing when the band realized “Bob May” was actually the author of the lyrics for “Rudolph the Red-Nosed Reindeer”!

Today, Paul and his sister Pauline St. Hilaire of St. Johnsbury Center keep a list of the local dance halls in which their father probably played, and they add up to 34 locations – not to mention all the town halls and Granges. Among them were Boomer’s Hall and Pythian Hall in St. Johnsbury, the Sunset Ball Room in Lyndonville, the Cedar Grove (later Max’s) in Sutton, Steels Lakeside Pavilion on Harvey’s Lake in West Barnet, Point Comfort on Joe’s Pond in West Danville and the Hookerville Dance Hall west of there, the Circle C (Barnet), Coles Pond (Walden), and others covering a range from Barre to Franconia and Bethlehem, N.H.

“He practiced playing the trumpet every single day,” Paul recalled recently. His dad told him, “You know, Paul, practice won’t make you perfect, but practice will always make you better!”

Drive through St. Johnsbury today along Route 2, from west to east, and there are signs of the town’s history all around you. From the winding…