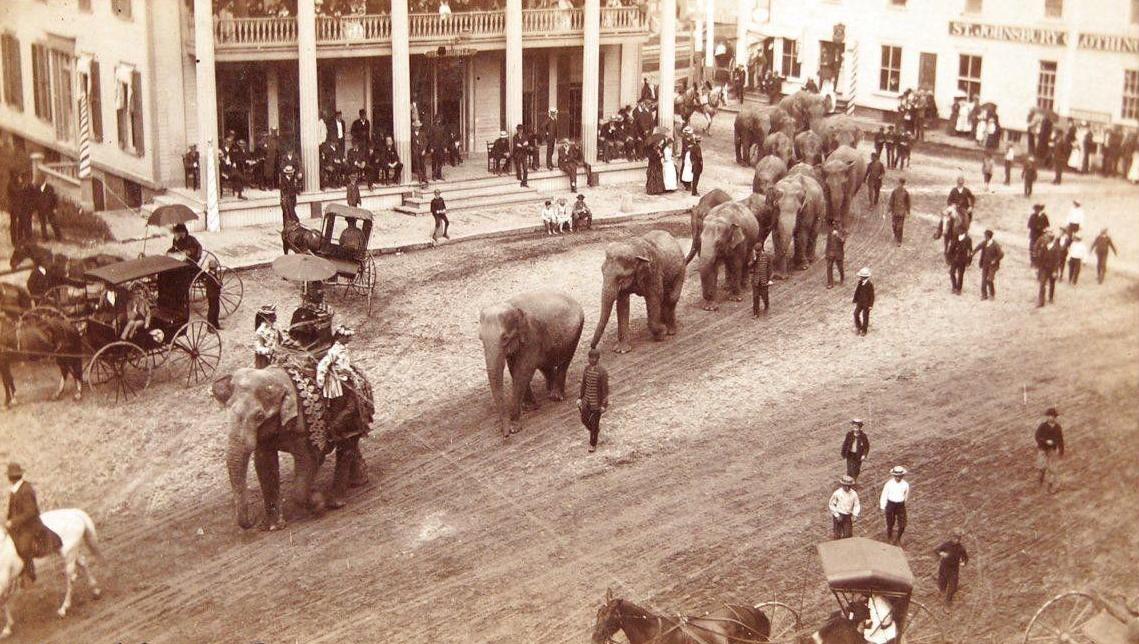 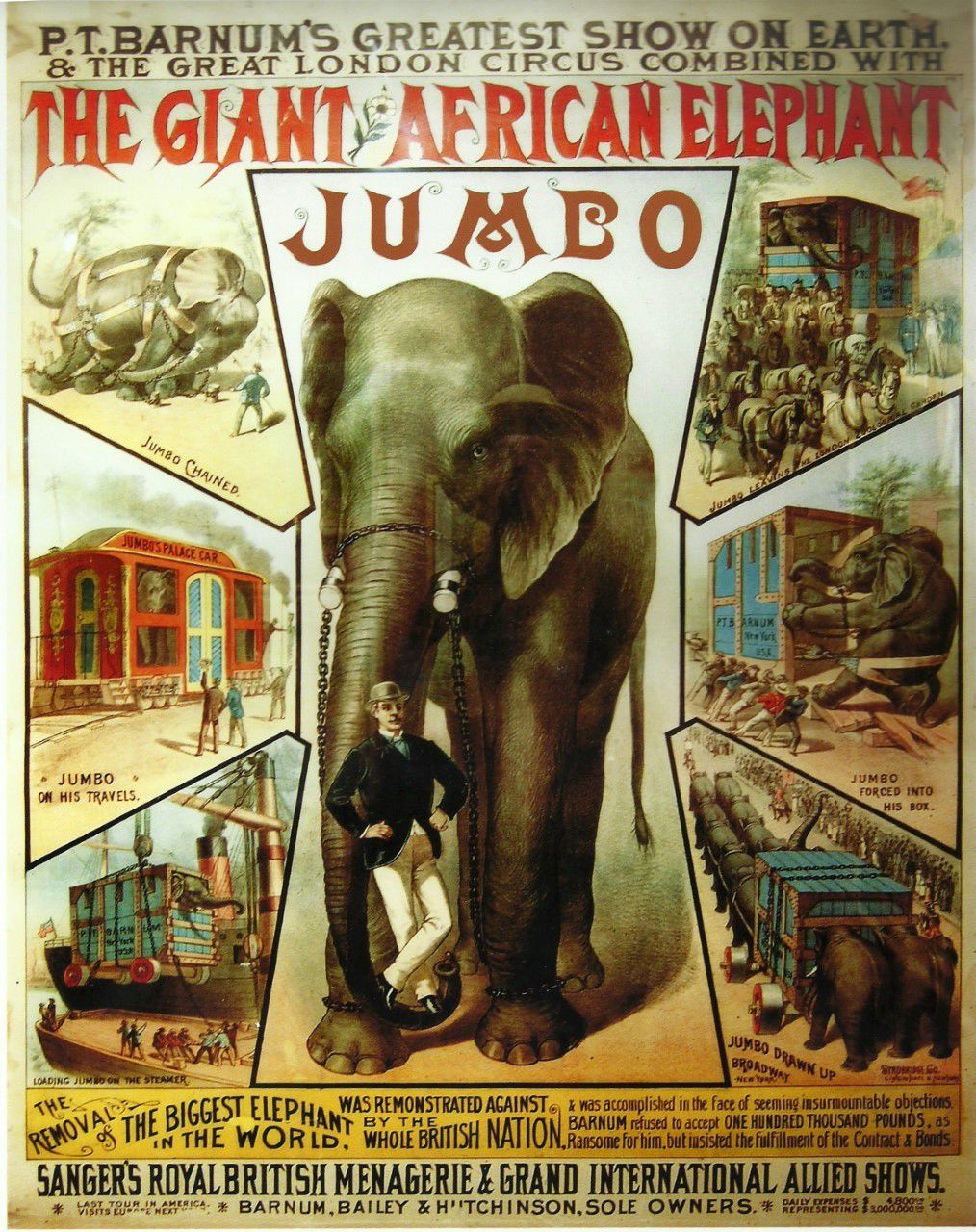 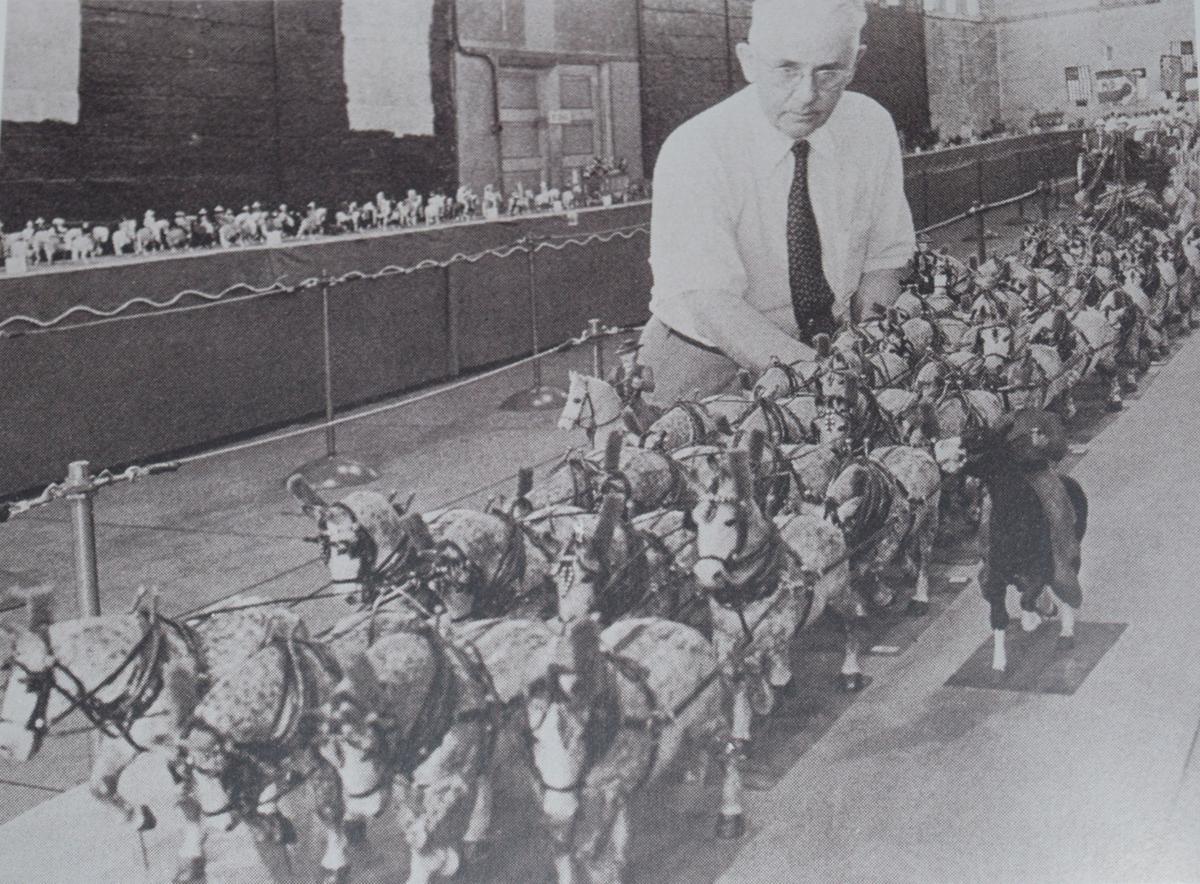 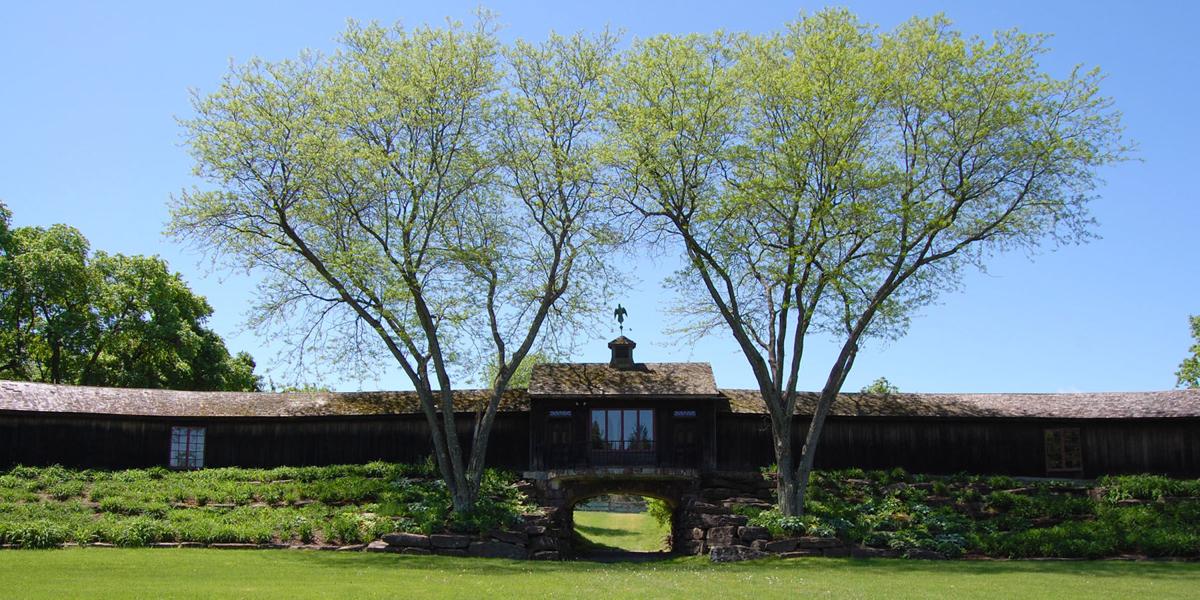 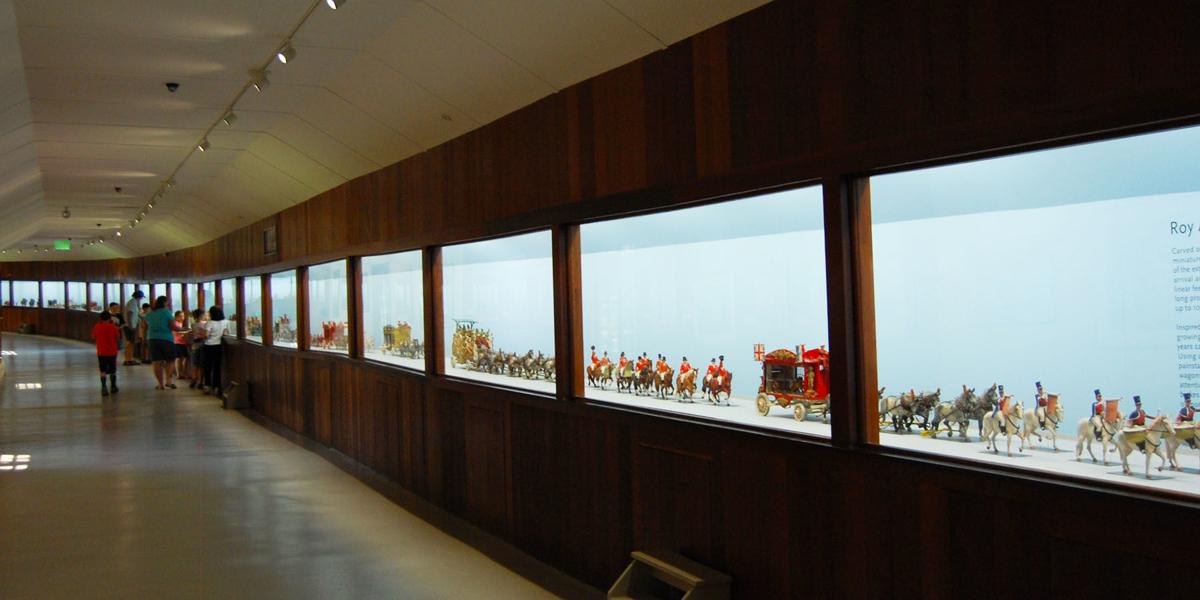 The interior and exterior of the Circus Barn Building at Shelburne Farms, which house's Arnold's complete 4,000-piece miniature circus parade. 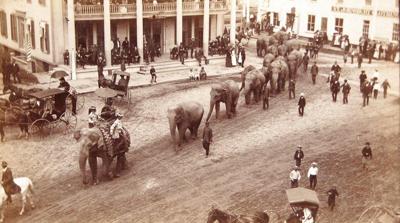 For 60 years, the arrival of the circus brought life to a halt in communities where the parade and the performance were staged. Factories closed, farmers left their fields and children waited in gleeful anticipation. The childhood memories of these events in St. Johnsbury and Montpelier led to one man’s passion for collecting circus memorabilia and devoting 30 years of his life to carving a miniature circus parade, now on display at the Shelburne Museum.

The 1870s to the 1930s were the golden age of the American circus before it fizzled out in the 1950s. Performances captivated spectators in large cities and small hamlets. Adults and children would anxiously await the annual arrival of the circus, heralded by colorful circus posters.

Circuses traveled around the country in custom-designed railroad cars that made it easier and safer to load and unload show wagons, animals, equipment and the “big top.” Railroad centers were generally the performance venues. Parades included elephants, tigers, camels, zebras, monkeys, gorillas, along with other exotic animals. They also included performers, aerial artists, clowns, bands, and an ear-shattering calliope.

In Volume I of Claire Dunne Johnson’s “I See By The Paper,” she wrote, “In July of 1893, Barnum & Bailey had a super-special pageant show called ‘Columbus and the Discovery of America,’ featuring $75,000 worth of scenery and $250,000 worth of costumes, and the free parade itself was a great treat. This show would have been at the Fairgrounds (Later called Hazen Field where the Comfort Inn is now located.), but other, smaller circuses used facilities which were easier for the walking public to reach.” “The big three, of course, was to be at the field when the circus cars were unloaded from the railroad, and the honest-to-goodness elephants were right there in person. No charge for this, if (as a child) you had an obliging relative or neighbor to supervise you.”

Although the golden age has long since passed, the memory of these grand spectacles lives on through the efforts of Roy F. Arnold (1892–1976).

Roy’s father, Francis William Arnold, worked as a stone cutter and sculptor in the Hardwick granite industry. Roy’s mother died in 1898 just after Roy had entered first grade. Following her death, Roy and his father moved to St. Johnsbury which proved to be an auspicious change of location for Roy. As the regional railroad center, St. Johnsbury became the venue for the circus where Barnum and Bailey’s Greatest Show On Earth gave its annual performance.

The Hardwick Historical Society’s collection on Roy Arnold contains personal reflections, including direct quotations from the artist that provide an in-depth look into his motivation.

“Back in Vermont, before the turn of the century, my father would drop all duties and take me to the circus in St. Johnsbury, and later in life to the capital city (Montpelier),” according to Roy. “I now realize it was nine for him and one for me, but my memories of those days have never failed. Father always encouraged me to ‘make things’, and the top of our barn was filled with a miniature circus, a puppet theatre, and many boyhood contraptions.”

Following his boyhood inspiration of witnessing circus parades in St. Johnsbury and Montpelier, Roy graduated from St. Johnsbury Academy in 1910 and went on to attend Troy Conference Academy, which was later called Green Mountain College. He graduated from Troy Conference Academy in 1912 and in 1913 he joined the Strathmore Paper Co. in Woronoco, Mass., as an employee in the cost department. The company produced high-quality art and printing papers. He took a leave from his job in 1917 to enlist in the Army during World War I. After serving in France, he rose to the rank of regimental sergeant major and was later commissioned a second lieutenant. Following the Armistice of 11 November 1918, which ended the fighting, he served with the United States Military Commission in Berlin, Germany.

Following the war, Roy returned to Strathmore Paper Co. where he would work for 50 years. He retired as manager and director of product development.

His passion for circus parades led to his new calling: recreating a circus parade so that future generations could share the experience of those who used to line both sides of Main Street in St. Johnsbury to see the real thing.

“For years I have collected posters, heralds, photos, and books of the circus, and about 1925 I decided to make a circus parade,” according to Roy. “The first wagons I constructed were indeed crude and have long since been destroyed; however, today most of the many thousands of items in ‘The Circus Parade’ approach perfection.”

The painting and the carved details in the figures are exquisite.

Roy began extensive research into the construction of the miniature parade in 1925, which he decided to recreate on a one-inch to one-foot scale. Thousands of pieces were inspired by drawings, advertising materials and photographs. Each wagon, for instance, is constructed with wood and metal mirroring the full-size originals. When completed, the parade included 4,000 pieces and extended over 525 feet capturing the pomp and pageantry of a two-mile-long, life-sized parade. The metal frames and iron bars on the cages were cut, bored and annealed together. The air vents and hardware were handmade. The brakes on the wagons are workable and there were more than 60 pieces included in making each wheel. The leather harnesses on the horses are authentic in design.

“Five craftsmen’s work is represented in the parade as it exists today, but almost all of it was made by one other man and myself,” according to Roy. “As with any other hobby, I soon found that many folks throughout the country were interested in circus models. Some years later, I joined the Circus Model Builders Association, Circus Fans of America and the Circus Historical Society.”

Creation of Arnold’s Circus Parade spanned over 30 years. Roy constructed all the wagons and he enlisted the talents of four separate carvers who worked on the figurines and animals: Henry T. Prior of Holyoke, Mass., Charles W. Dech of Pa., Milo Smith of Herkyone, N.Y., and Charles Lockier of Auburn, N.Y. These carvers worked mainly with ponderosa pine. Charles Dech worked the longest on the figurines, but according to Arnold, “…he could work fast.” One afternoon, sitting in Roy’s back yard, Dech carved four horses for a tandem hitch, with no apparent effort.

The parade covers a historical period from 1870 to 1915. It includes wagons from some of the best circuses that plied the circuit: Barnum and Bailey, Adam Forepaugh, Ringling Brothers, Hagenhack Wallace, Al G. Barnes, and Walter L. Main, to name a few.

Arnold’s vision of an ideal miniature circus parade included five bands, 53 wagons (band, tableaux and cage), 400 horses (draft, riding, and driving), 90 ponies, mules, and donkeys, 30 elephants, 33 camels, 14 zebras, 80 caged animals, 20 clowns, 83 musicians, 170 riders and over 130 other personnel. Among the many units in the parade are a replica of the Two Hemispheres Band Wagon, with a 40-horse hitch, the nine Fairyland floats, the Age of Chivalry, and the four continent wagons—Europe, Asia, Africa, and America—all features of the Barnum Bailey show; the 16-camel hitch and the Bell Wagon, featured by Ringling Brothers Circus, and the Roughriders of the World from the Buffalo Bill Wild West Shows along with a vast number of other wagons, animals and figures.

Electra Havemeyer Webb founded Shelburne Museum in 1947. She was inspired to create a collection of circus memorabilia when a massive collection of circus posters were donated to the museum by her cousin, Harry T. Peters, Sr. (1882-1948). The museum had already been collecting circus figures for the Folk Art Gallery.

In 1955, the decision was made to attempt to acquire a circus wagon to add to the museum’s vast collection of wagons, sleighs, carriages and commercial wagons. The search resulted in little success. David L. Patten, executive director of Plymouth Plantation in Plymouth, Mass., suggested Shelburne Museum look into the acquiring the miniature circus parade created by Roy Arnold. He knew Roy was looking for a permanent home for his life-long creation. He felt, as a native Vermonter, Roy might be attracted to the idea of his circus parade on display in his home state. Mrs. Webb was captivated by the idea.

After careful study of the development of the parade, verification of the accuracy of all the units and a favorable judgment of its potential public appeal, acquisition of the parade was personally approved by Mrs. Webb in 1959. When approached, Roy was delighted his creation would permanently reside in Vermont where it would be on display for successive generations of Shelburne Museum visitors, many of whom would never have had the opportunity to attend a circus parade. As part of the museum’s circus memorabilia, it would be a central component of the collection documenting the golden age of the American circus.

The museum’s Circus Building was completed in 1965 to meet the requirements of exhibiting the five-hundred-foot long Roy Arnold miniature Circus Parade. The large, horseshoe-shaped, spruce and cedar structure gives the visitor the impression of walking along the concourse of a circus parade.