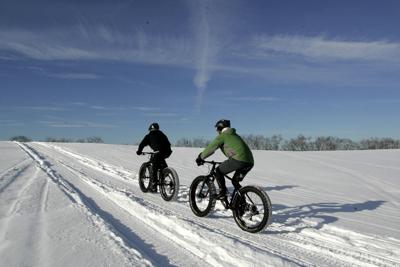 Kingdom Trails Association (KTA), one of the most popular mountain biking destinations in the United States, is the target of a request to have state officials apply Vermont’s Act 250 land use law to KTA’s network of 80 miles of trails built over the last 25 years in East Burke area.

“It’s really scary,” said KTA Executive Directory Abby Long. “We don’t want Act 250 on our trail networks and our landowners don’t want it on their properties. It could jeopardize Kingdom Trails and the regional economy of the Northeast Kingdom. We are going to do everything we can to not have Act 250 apply.”

On Jan. 23, the District 7 Act 250 office in St. Johnsbury received an email from Northfield resident David Packie requesting a review by the Natural Resources Board (NRB) to determine whether Act 250 should apply.

The request stated, “Considering the latest blow-up, and after paying close attention to the fall out and response [by] the KTA, I see industrial level [mountain biking] as clearly impacting that community and many others in profound ways, and clearly falling under the criteria of Act 250. If it has not yet happened, I'd like to request a review of KTA by the NRB to determine if the involved lands should require a permit, as was determined in Victory.”

Application of ACT 250 last year led to the shutdown of the Victory Hill Sector, a nonprofit recreational trail network near KTA but its own separate entity. In May of 2019, the NRB issued its opinion that Victory Hill Sector needed an Act 250 permit. The board cited several factors including the collection of fees, which in its opinion, made the trail network a commercial development. The decision is currently being appealed to the Environmental Division of Vermont Superior Court.

Victory Hill Sector reacted to the decision by posting a statement on its website:

“Victory Hill’s host landowner finds that Act 250 would be prohibitively time consuming, costly and effectively punish them for opening their trails to the public for recreation,” reads a statement on Victory Hill Sector’s website. “The trail system thus has been closed to all public use to avoid the risk of Act 250 review.”

Kingdom Trails relies on the generosity of over 90 private landowners, who allow trails on their properties without compensation. While this arrangement is rare in the mountain biking world, several trail systems throughout the state of Vermont cross private property.

Long, the KTA executive director, said the organization was aware of Packie’s request and sent a letter to its landowners informing them and asking them to make their feelings heard.

“At this time the situation is not imminent,” the letter said, “our main goal is to avoid Act 250 jurisdiction attaching to the property you so generously make available to KTA for trails. Your voice as a landowner is strong and perhaps the most compelling voice that can be heard. Therefore, we ask that, if you are willing to do so, please reach out to your legislators and the Governor’s Office to share your concerns.”

In an interview, Long cited differences between KTA and Victory Hill Sector and said she hopes the NRB will reach a different conclusion. If not, she said the organization will appeal.

“Our landowners see the vision, see the asset, see the positive impact trails are having in a region that faces persistent economic and social challenges," she said. "Therefore, we must protect our relationship with landowners and their property.”

In 2018, the Vermont Legislature appointed a special commission to make recommendations to modernize Act 250 on its 50th anniversary. Trail networks were among the issues examined as part of the review, leading to a report issued in October 2018.

Recreational trails are a valuable resource for the state’s economy and Kingdom Trails Association (KTA) has become arguably the most successful example. The organization recently celebrated its 25th anniversary and has seen explosive growth in the number of rider visits over the last few years creating traffic and parking issues in East Burke Village and on nearby Darling Hill. The nonprofit organization maintains 80-plus miles of mountain biking trails that form a spiderweb around the village of East Burke, on both sides of Darling Hill Road, and to nearby East Haven.

Act 250 jurisdictional opinions are usually issued by a local district office. District 7 is based in St. Johnsbury and the district coordinator is Kirsten Sultan. Since she and her family own land both within and near the KTA network, the case will be handled by overall State Coordinator Aaron Brondyke.

“I have not yet begun the significant amount of research that will be needed to form this opinion,” Brondyke said, “but it will likely take months to complete.”

Should Act 250 apply to trails?

The October 2018 report said trail projects of a certain scale and impact should require some level of state review, but trail organizations questioned whether Act 250 was the best tool for the job.

Warren Coleman, a partner at the Montpelier governmental relations firm MMR, has been lobbying lawmakers to do just that.

On behalf of the Vermont Trail Alliance, a group of both motorized and non-motorized stakeholders, are advocating for the creation of a new program for trail oversight through the Vermont Department of Forests, Parks and Recreation, according to Coleman. This new program would be an alternative to Act 250 and put compliance responsibility solely on the trail organization and not on the landowner.

“We’re trying to create a program that creates no additional regulatory liability on landowners,” Coleman said. “Without the generosity of these landowners, our trail networks don’t work.”

This could change, though, according to Coleman. The committee’s bill could be modified by the House or Senate, or perhaps a new stand-alone bill introduced. “I’m not too concerned at this point,” said Coleman. “There are lots of different avenues to work this trail legislation in.”