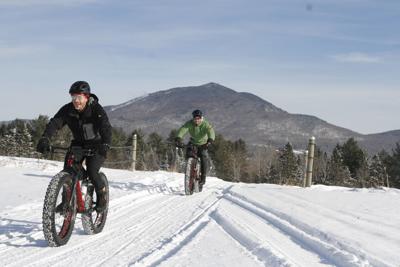 Exceptional growth and the loss of bike access to hundreds of acres in the heart of its celebrated trail network has led to the relocation of the largest mountain bike festival in the Northeast and prompted Kingdom Trails Association (KTA) to admit mistakes and commit to strengthening relationships with the 92 landowners who host trails on their property.

In a Jan. 23 “open letter to the community,” KTA board members and staff said, “We, like many others, have been caught up in the trail network’s economic successes but have missed the unintended consequences and negative outcomes that growth brings. We wholeheartedly commit to a change in focus.”

An open letter to the community from Kingdom Trails

Kingdom Trails is much more than a network of epic trails: it is the very embodiment of community. The trails exist because of this community’s vision, will, heart, resilience and generosity.

KTA has seen explosive growth over the last few years. Between 2016 and 2018, the number of rider visits increased by nearly 50 percent from 94,000 to 137,000, creating traffic and parking issues in East Burke Village and on Darling Hill. In 2017, KTA took in over $1.1 million in revenue against $640,000 in expenses. The nonprofit organization operates with four full-time staff, 30 seasonal employees and a trail crew. The 80-plus miles of mountain bike trails form a spiderweb around the village of East Burke, on both sides of Darling Hill Road, and to nearby East Haven.

Back in December, three landowners on Darling Hill notified KTA they would no longer provide bike access on their properties, but would continue allowing Nordic skiing, snowshoeing, hiking, jogging, and horseback riding. The restricted land is on both sides of Darling Hill Road and contains some of the network’s most popular and beginner trails. Without access to those trails, the number of riders using Darling Hill Road to connect to other trails will likely increase.

It’s the first time in its 25-year history the organization has lost access to a parcel of this size and significance.

Reaction to the news has been widespread and varied: support for the landowner’s decision, sadness at the loss of popular trails and confusion as to how it happened. Some have threatened to cancel planned trips to KTA this year, opting to visit different trail networks instead. Executive Director Abby Long says KTA understands these sentiments and the organization is taking steps to ensure the sustainability of the trail network.

Kingdom Trails will be soliciting feedback from landowners and members of the community.

Recently, KTA officials announced their commitment to relieving stress on Darling Hill by not adding any more parking to that area and relocating events, like NEMBAfest, previously held on the ridge to new locations. NEMBAfest, is an annual New England Mountain Biking Association festival that draws thousands – making it the largest mountain biking festival in the Northeast.

“In a combined decision, the New England Mountain Bike Association, Kingdom Trail Association, and Wildflower Inn, have chosen not to host the 2020 NEMBAfest on the Kingdom Trails network,” read a Jan. 17 public statement from NEMBA. “The NEMBA organization has chosen to take a year off from producing the festival in order to find a more suitable location for 2021.”

Although the contribution to the regional economy was significant, NEMBA officials wrote, the event was too large for the surrounding communities. The impact of the event placed stress and pressure on rural infrastructure and roads and was disruptive to neighbors and the community.

A path to sustainability

“I’d like to show landowners that Kingdom Trails is striving to make amends and change,” said Long. “We will be taking action.”

Katie Story, a member of the volunteer KTA Board of Directors since 2015, was named board chair last November. She’s an avid mountain biker and Lyndon State College graduate. Her day job is with Easter Seals and she says Kingdom Trails was a major factor in her decision to settle in Burke.

Whether or not the land closures will lead to a drop in visits is unknown, according to Story. She acknowledged the popularity of the affected trails while promoting the remaining miles still available to riders.

Over the past couple of months, Story has been working to create a formal and professional system of feedback with landowners and the community. She’s also proposing a shift in marketing strategy toward rider education and trail etiquette.

“The most important customers they have are the landowners, but it’s always been about the bikers." - Kurt Hansbury

Long said there was no contingency plan for losing access to hundreds of acres on Darling Hill and the news caught everyone off guard. KTA’s reliance on the generosity of private landowners is rare in the mountain biking world. Many networks across the country are sited on public lands or in states where landowners receive tax incentives for allowing recreational access.

“We’ve looked into buying land and acquiring conservation easements to protect the land,” said Long. “But we really value our relationships with our landowners.”

Story said owning all the land that hosts trails is not feasible or a priority.

“It hasn’t been our policy to own land,” she said. “I think one of the things that makes Kingdom Trails so beautiful is how the community has worked together to make this happen and become an economic stimulus.”

Kurt Hansbury’s family owns hundreds of acres of land on the southern end of Darling Hill, including The Wildflower Inn and Pavillion in the Pines, a wedding and event venue. There are several KTA trails on the family’s property and Hansbury, an avid mountain biker, said problems have been brewing for years. He detailed several altercations with riders, from parking violations and interrupting events at the pavilion, to verbal confrontations.

“I think KTA grew so fast they weren’t expecting these problems,” said Hansbury, who’s family sold KTA 132 acres on Darling Hill a few years ago. “It may only be 5 percent of the riders that are bad eggs,” he said, “but 5 percent of 1,000 riders is a lot different than 5 percent of 10,000.”

Hansbury said the withdrawal of permission for mountain biking is KTA’s first big controversy and everyone is watching to see how the organization handles the “milestone moment.”

“The most important customers they have are the landowners, but it’s always been about the bikers,” said Hansbury. “If things stay the way they are right now, they’ll lose Darling Hill and that would be a major economic problem for the region. They’re basically building a super Walmart with no parking lot.”

In addition to the parcel the organization bought a few years ago from Hansbury’s family, KTA is in talks to purchase a 250-acre tract from the family across from the Wildflower Inn. Last year, the organization acquired land adjacent to East Darling Hill Road to secure a critical trail connection and ensure that riders have an off-road option for both uphill and downhill access to Darling Hill.

Hansbury and his family are major supporters of KTA, but he’d like the organization to consider major changes such as financial benefits to landowners for opening their land to KTA, more rule and etiquette enforcement for parking and on the trail, and more efforts to educate riders that they’re riding on private property. He favors a bike patrol policing the trails.

“You have enforcement with skiing, snowmobiles, swimming pools, etc.,” he said. “I think you could fit it into the vibe of Kingdom Trails.”

A new code of conduct, specific to KTA, that requires a signature from anyone purchasing a membership has been proposed. There are also plans to increase the number of paid ambassadors on the trails. In the past, ambassadors have been used primarily on weekends to monitor parking and to keep riders safe and responsible. There are also plans for more signage to educate riders that they are riding on private property by landowner generosity.

Twenty-five years ago, the trail network got its start using existing logging roads and Nordic ski trails on Darling Hill that dated back to the beginning of the 20th century when Elmer Darling made a fortune operating a New York City hotel. He purchased thousands of acres on Darling Hill and throughout Burke and made countless contributions to the region over the years. As the number of riders increased, the Nordic trails morphed into bike paths and the network grew quickly. This hands-off approach produced what many KTA riders refer to as a positive “vibe.” Now, some say the organization is at a cross-roads and it’s time to change the business model, but others question if that will be at the expense of the “vibe?”

“Owning our own facilities is a good way to show everyone that we’re here to stay and we’re part of the community,” Long said.

Kingdom Trails believes the study, which will be completed by the end of 2020, will help address many of the concerns voiced by community members and landowners.

KTA plans to work with the Lyndonville Select Board and Police Department to lower the speed limit on Darling Hill, while also dispersing trail traffic through new trail development, said Long. Because the recent land restrictions split the northern and southern sections of Darling Hill, KTA is working with Hansbury and his family to build a new trail from the southern section to the Wildflower Inn and Village Sport Shop Trailside.

Darling Hill is a major draw for the network due to its stunning views and hosting many of the original trails and beginner trails, and businesses. Long said new proposed trails are being directed well off Darling Ridge to ease congestion.

There are plans to add a new trail from the village of East Burke, parallel to Route 114, to White School Road to create easier access to the Moose Haven section of trails in East Haven. Last year, KTA opened The Flower Brook connector trail to discourage trail users from biking along Route 114 from East Burke to East Haven.

KTA is working with the Lyndonville Select Board to build a trail to connect the southern section of Darling Hill to the potential new Lyndon Green Space — the old town garage site on Route 114 just before Darling Hill Road. Options are also being explored to extend trails to the Burke Town School and possibly West Burke. These efforts would relieve congestion on Darling Ridge and East Burke, according to Long, as well as broaden further economic opportunities to neighboring towns.

While many hope KTA and the owners of the now-restricted properties on Darling Hill can reach an agreement to restore at least limited access for mountain biking, Long and Story said the organization is moving forward as if bikers will not have access.

The network will be affected by this change in access and connectivity, Long said, but miles of diverse trails remain for all skill levels. She said KTA is committed to providing and enhancing the experience members have come to expect, as well as striving toward their mission of offering recreation and education opportunities to foster the health of the local communities, environment, and regional economy.

“There’s a lot of attention on us,” Long said. “My goal is to prove to everyone that we’re here to stay and dedicated to making changes.”