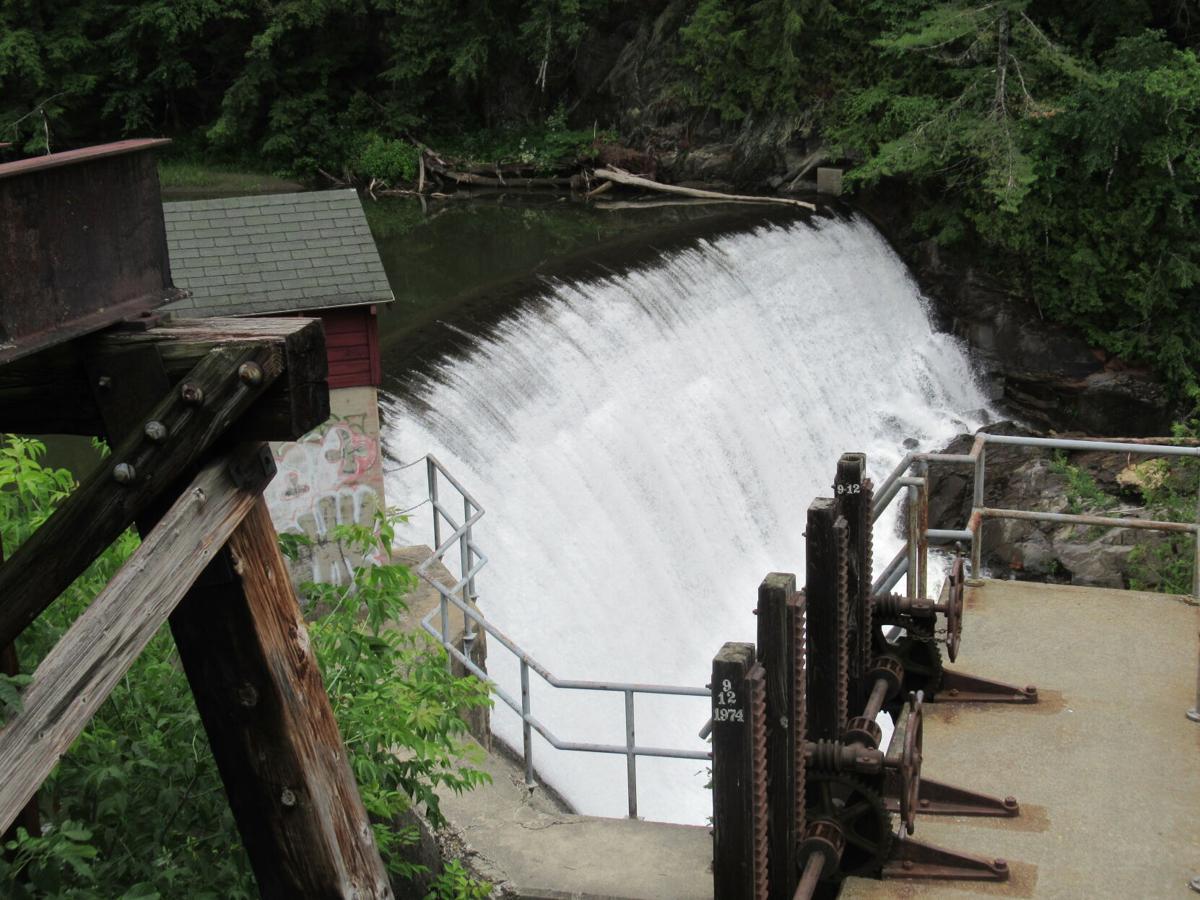 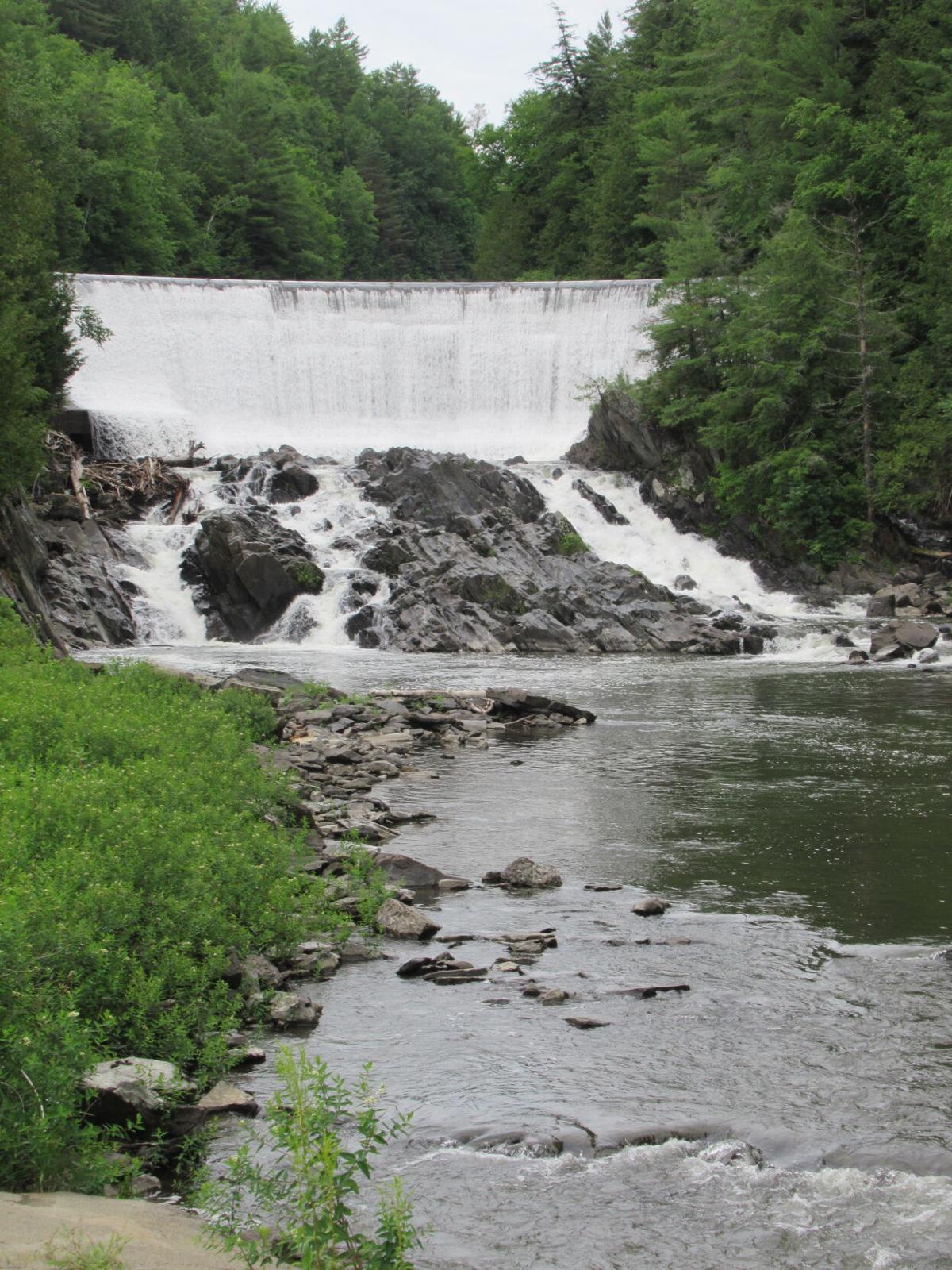 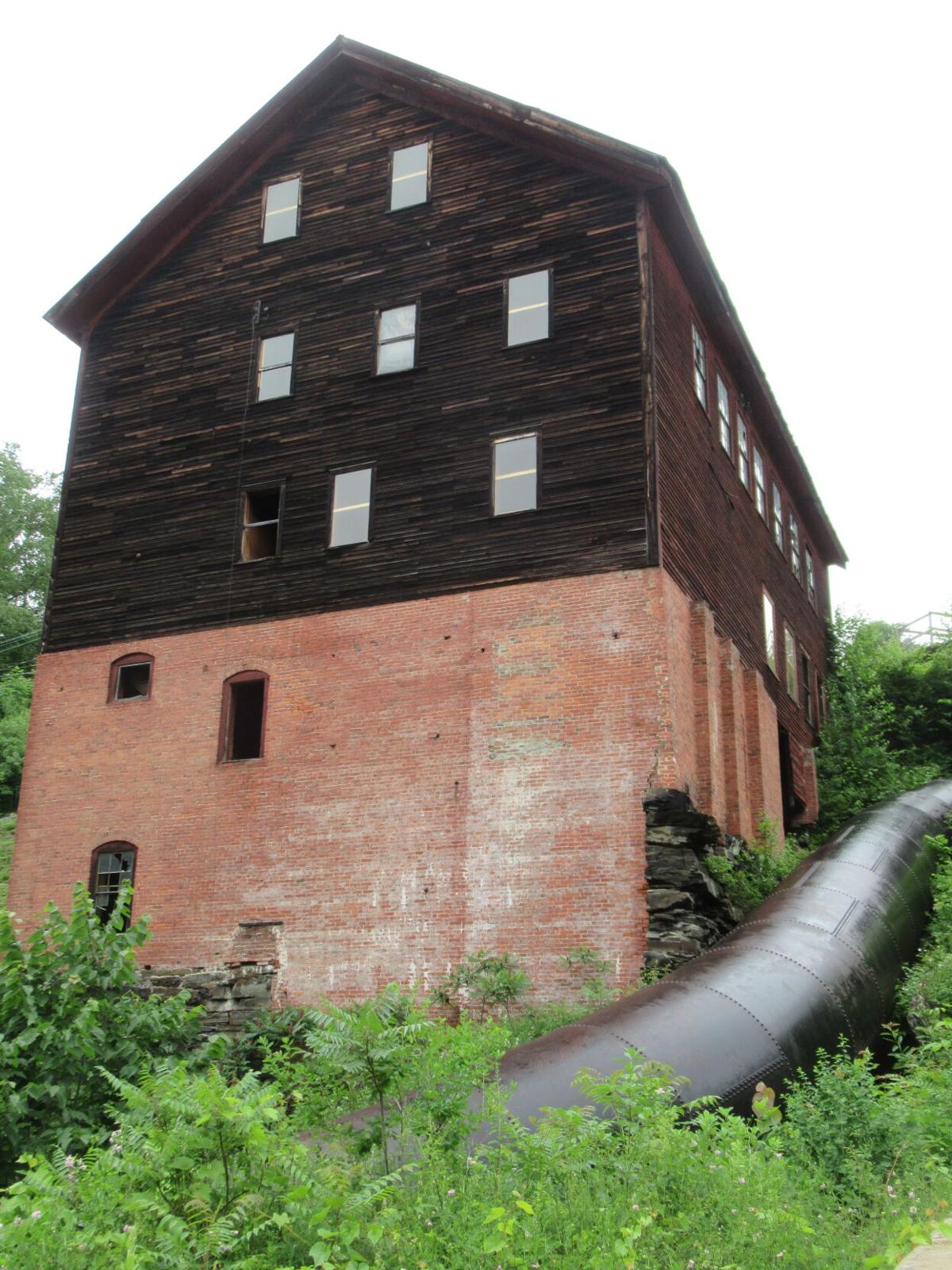 There are two waterfalls on the Passumpsic River in Lyndon that have played a large part in the development of the community. Little Falls and Great Falls are both the sites of dams and electrical generating facilities owned by Lyndonville Electric Company (LED).

The latter dam and electric station, Great Falls Hydroelectric, was issued a renewal of its license to operate by the Federal Energy Regulatory Commission (FERC) in August of last year. LED applied for the renewal in May 2017. The site’s prior license was granted on June 29, 1979.

In order to get a FERC renewal, hydroelectric sites must provide more than just an electrical generation capacity. The sites must also protect recreational opportunities and protect fish and wildlife.

Also important at the Great Falls site, which is located behind Fred’s Energy off Route 5, is its history. Everything about the Great Falls site is historic – an old mill building located there housed the first electrical generating equipment used by LED. There is also the “old” 700 kilowatt powerhouse which was built in 1915, the “new” 1,350 kilowatt powerhouse that was built in 1979, the penstock, the spillway, the power canal, and the dam – it all tells a story.

The dam on its own is very impressive for this region. It is 160 feet long, 32 feet high, with two-foot-high flashboards. The power canal is 282 feet long and 22 feet wide.

The FERC relicensure document for Great Falls noted, “These above-ground structures meet the requirements for listing in the National Register as an early and continuously operated municipal-owned hydroelectric facility that contributed to the development of the community.”

The first significant economic growth in Lyndon was driven by access to waterpower – and although this story is about Great Falls, a thumbnail sketch of the history Little Falls illustrates the importance of the two Passumpsic River waterfalls to the town of Lyndon.

A mill facility at Little Falls, which is located off Red Village Road, existed at the site as early as the 1790s. In 1863, a sawmill and gristmill operated there, and in 1867 the Lyndon Mill Company was formed. In 1911, T.N. Vail (an early president of AT&T) built an electrical generating station there with direct lines to his Speedwell Estate and to the agricultural school he founded in Lyndon Center that later became Lyndon Institute. LED bought the facility, now called Vail Hydro, in 1921.

At Great Falls, the first use of the waterpower was by an out-of-state firm. In 1876 C.T. Wilder & Co. of Boston purchased the site. As well as building a dam on the river, Wilder & Co. built a 4.5-story structure now known as the “Old Mill.” The Lyndon site operated as a spruce pulp mill, and C.T. Wilder & Co. also had satellite locations in East Barnet and in Ashland, NH.

The Great Falls site was not only blessed with waterpower, it also was adjacent to a portion of the Connecticut & Passumpsic River Railroad, which had been built near the location circa 1840. In its heyday, from 1876-1879, the mill produced one train carload of pulp per day. The mill operated day and night and employed 25 people.

Early maps show the railroad tracks that serviced the mill on the east side of the river, and a large bridge abutment that exists today upstream of the dam seems to indicate the railroad crossed there.

On maps from the early 1900s, however, the railroad tracks are shown on the west side of the river. The maps were made before the historic 1927 flood (during which Lyndon lost the most railroad infrastructure in the state) but it seems that in the vicinity of Great Falls, the railroad moved across the river before the flood.

The C.T. Wilder & Co. mill at Great Falls had a short tenure. It only operated for 13 years. It was shuttered for repairs in 1889 and never reopened. Left unused was the large mill building with its millworks, business offices, and four-story elevator tower. A fire room was attached to the mill, and there was also a blacksmith shop and a horse shed.

When Lyndonville was ravaged by an enormous fire in 1894, the tragedy in the end spawned new investment in infrastructure for the community. In 1895, the village trustees of Lyndonville pledged the credit of the village to provide an electric plant, expected to cost between $15,000 and $20,000. The site at Great Falls was chosen for the project, and the Wilder Co. agreed to lease their operation for five years at six percent of the $22,000 that they had asked for their title. The deal gave Lyndonville the ability to purchase the property in five years.

The “Old Mill” building was soon renovated for use as an electric plant. Seven waterwheels were removed as it was outfitted to generate electricity with a set of Rodney Hunt Manufacturing Co. 24-inch wheels that were warranted to generate 640 horsepower. A dynamo room was created and poles to carry electric wires were set in November 1895, stretching over hill and dale from the former pulp mill to the center of Lyndonville.

Lyndonville Electric Department was chartered by the Vermont Legislature in 1896 and today it is the largest municipal electric department in the state based on square miles of territory.

In 1915, LED built a new powerhouse, which is still usable but was replaced with a powerhouse of higher capacity in 1979. It is expected that the current dam used at the site was built at the same time as the first powerhouse. The existing dam has a slightly curved shape, and photos of an earlier dam show it as having a straight design.

When the 1915 powerhouse was built the “Old Mill” was mothballed. For a century, the large mill - which sits essentially in the center of the Great Falls complex - was used only for storage. In the 1990s the building still contained a series of drawers that were filled with old electric department ledger books and other early artifacts.

It was at about the time that Bill Humphrey, LED’s current general manager, took over the job, when the “Old Mill” suffered significant vandalism. He remembered that about 20 years ago, vandals shattered window glass in the building that was almost 200 years old, ripped out lovely antique drawers and smashed them, and threw LED ledger books and other documents that were over a century old all over the floor and trampled them.

The vandalism led to stripping out much of the historic artifacts in the “Old Mill” that had remained undisturbed for a century.

When LED filed for its 40-year license renewal a few years ago, the electric company had hoped to get approval to remove the .12-acre parcel on which the “Old Mill” sits from their jurisdiction – but after a review from the Vermont Department of Historic Preservation, the structure was deemed too historically important for removal.

The FERC renewal license requires that an Historic Properties Management Plan be developed for the site. A Maine company, Klienschmidt Group, has been put in charge of making sure LED meets all timelines for required reports and changes outlined in the renewal license.

As part of the Great Falls Hydrdoelectric FERC license renewal, LED is required to provide informational signs and a kiosk to mark the recreational facilities at the site. The access road to the site has been gated for several years, but it will have to be opened with posted hours in the near future. As well, the “No Trespassing” signs at the gate have to be removed. The upgrades need to be completed by the end of this summer’s construction season.

The Great Falls site already has a downstream canoe access area on the west side of the river and a site where people can fish from the riverbank. It has ample room for parking too.

On the east side of the river, a long and steep canoe portage also exists, which was built in 1995 to create a continuous water trail along the mainstem of the Passumpsic River. In order to improve that amenity, LED has been asked to install a 106-foot-long “canoe slide” at the upstream end of the portage route. In its original application for license renewal, LED proposed to do some maintenance on the existing east-bank trail, but did not want the portage designated as part of the Great Falls recreation facility due to its steep and dangerous slopes.

An example of a “canoe slide” is on the Huron River Water Trail in Ann Arbor, MI. To make the portage around a dam there safer and easier, stone pads were laid on which were placed concrete bases, and then a series of perpendicular rails were affixed. The idea is to place the canoe or kayak on the rails and push or pull it through the steep section.

LED general manager Bill Humphrey said he has explored canoe slides in other states and termed them “engineering marvels” which he worries will turn a little-used and rural canoe route int a “gilded canoe portage.”

With a deep gorge bounded on one side by an operating railroad and extremely steep banks on the other side of the river, the truth is that there is no easy place for a canoe portage around the Great Falls dam and waterfall. Mr. Humphrey acknowledged that access to river recreation is important for the general public, but he also expressed valid worries that the secluded nature of the Great Falls property has left it prone to vandalism, littering, and reckless use.

“Let’s hope that if more people start using the site they will help to police it and prompt people to respect the property,” said Mr. Humphrey.

A year after the recreational improvements are made, LED is required to assess the usage of the area by the public, identify any safety issues, and identify any recreational changes that could improve the resource.

In terms of wildlife, LED has agreed to avoid cutting trees more than three inches in diameter from June 1 through July 31, to protect the northern long-eared bat, which is a federally protected animal.

No alteration of the facility is required for fish protection at this time. However, the Vermont Department of Fish and Wildlife has a contractual right to require a fish ladder be built, if such a step is deemed necessary in the future.