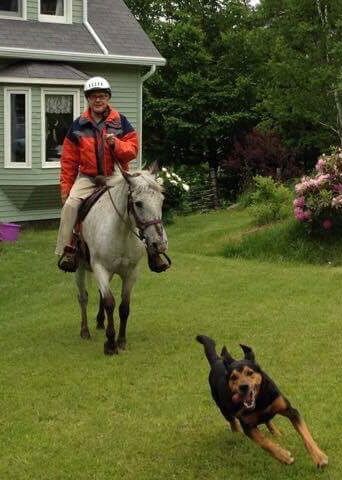 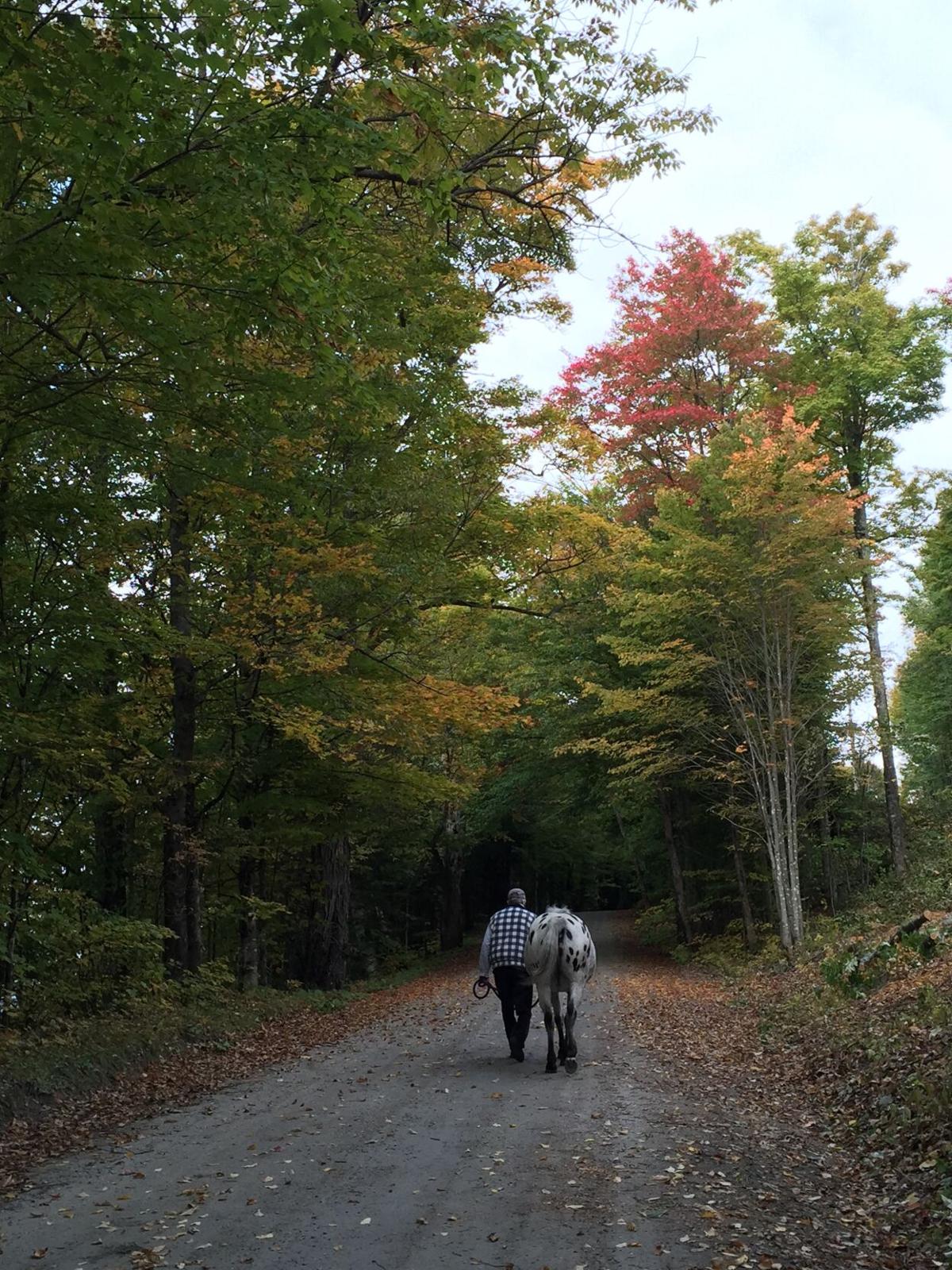 I woke up one morning in early August and told myself to get going. Cheyenne would be waiting patiently for me by the gate. Then I remembered - Cheyenne is gone.

Throughout my childhood and adolescence, I wished for a spirited, loyal horse of my very own. The horse of my dreams resembled the Rose-Parade mounts of TV’s cowboy heroes; the Lone Ranger’s Silver, Gene Autry’s Champion, the Cisco Kid’s Diablo, celebrities in their own right that chased bad guys past the same rock outcropping week after week.

And then at age 13 or 14, I discovered the illustrated books of Will James. I was particularly taken with “Lone Cowboy,” his mostly fictional autobiography, and “Smoky the Cowhorse.” Smoky is a story about a ranch hand, Clint, and Smoky, his favorite horse, who share many happy times. The gelding is stolen and suffers through years of abuse and neglect. Fate crosses their trails; Clint rescues Smoky and takes him back home to his Montana ranch.

That did it! I became a Western romantic. I wanted to be like Clint, a clean-living ranch hand who did an honest day’s work for an honest day’s pay, a guy who didn’t look for trouble but who didn’t back away from it either, a humble, monosyllabic cowboy who knew a good Cayuse when he saw one. (“Ma’am, you see that little filly starin’ us down right over yonder? She’s got spirit, I guarantee she’s a good one.”) My dream horse was now a smallish, nimble-footed, loyal mount with that certain something that only those in-the-know (like me) could spot immediately; a cowpony that would carry its rider and a newborn calf thrown across its withers through a midnight snowstorm, get by on a shallow pan of warm canteen water in the blazing sun, and calmly stand twilight-guard over a herd of frightened beeves as a towering lightning storm formed on the horizon.

My task was clear. I would sever my ties to suburban Chicago and migrate to the Great Plains of Montana, much as Quebec native, Joseph Ernest Nephtali Dufault (Will James) had done. I would find my soul-pony and take up a life of ranching. By way of preparation, my twin brother Tom and I biked for miles to a broken-down riding stable that Smoky would have recognized in his nadir years. The horses spent long, hard days on a trail that wound through a municipal dump, a salvage yard, underneath power lines, and into a forest preserve. I remember Apache, (a black and white paint with blue eyes), Friendly (a bay with a white star, black mane, and tail), the brown, lightning-quick, quarter horses Tops and Terry, and a smallish, fast, white gelding with a super-smooth gait. (He was my favorite. What was his name?) I fantasized about keeping each horse in our side yard and wondered who would be more difficult to convince, Mom or Dad?

Well, I never made it to Montana, having developed into an “honest day’s work for an honest day’s pay” special educator, but I rode my friend John Meier’s horses through the farm country of southern Wisconsin whenever I could. Geronimo was a tall, unpredictable, bronzy/brown and white paint with a black mane and tail. Orik was an elderly white stippled with gray/brown flecks, smallish, spirited, and very well trained. Then, I moved to North Carolina, met a smart, attractive city slicker from back East, and Julie and I hit life’s trail together. She has been my patient sidekick on many trips to county fairs, gymkhanas, rodeos, and horse-pulling contests.

I still rode when given the rare opportunity: a 1998 trail ride in Yellowstone with the family; a 2003 sabbatical ride in the Texas desert near Terlingua with my mentor and friend, Jim Gilliam; a 2008 beach ride on Jekyll Island, Georgia with Julie. I remember details about these rides that would irritate long-time acquaintances whose names I forget. Jim’s horse was Rebel and mine was Cuervo (crow). Our guide, Wrangler Chris, opined that “Mexican horses can run all day.” His mare, Snowflake, was a beautiful, sleek, brown and white paint (“Faster than a phone call”). The Jekyll Island quarter horses looked like Tops and Terry.

Any reader still riding out my story now understands the extent to which I dream of horses. I never expected to own one, however. Then at age sixty-three, I met Cheyenne. She was standing by the side of the road with her rescuer, horsewoman extraordinaire, Sherry Stahler. I stopped, rolled down my car window, and asked, “Sherry is that horse an Appaloosa?”

I thought she was joking, but she was serious. “I’ll be right back. I want to talk with Julie.”

Sherry later explained that she often passed by a little spotted mare standing in a farmyard, tied with a length of chain to a junked washing machine. Fearing that the pony was dangerously neglected, she convinced the owners to sell her. Sherry now had too many horses.

A few days after I’d met Cheyenne, Julie and I each placed two quarters on Sherry’s kitchen table and signed a document stipulating that we would return here if we decided that we couldn’t keep her. in July 2010, Sherry transported Cheyenne to the two-stall horse shed that I built, with a little help from my friends. It would be her home until July 31, 2021.

Cheyenne was a Pony of the Americas (part Appaloosa/part Shetland pony - 13-3 hands at the withers), a gentle toughie with a strong heart, a bomb-proof demeanor, an independent streak (inattentive riders beware), but – sadly - damaged lungs. We’re pretty sure that she had a life- trajectory like Smoky’s. Someone cared enough to teach her neck-reining and leg commands; I know that it wasn’t me and I doubt that it was the folks who chained her to a junked washing machine.

Our little spotted mare did what she could with what she had; she always gave it a try. If I asked her to climb a hill she’d go, but we usually took a few stops along the way. She was faster than a phone call for short distances, and if I tapped her ribs and clicked my tongue, she would canter or gallop until either I or her lungs concluded, Enough. She was “Shy Shy,” ever-curious queen of her domain, as interested in humans as they were in her, and especially attentive to children bearing edible gifts. She snorted at deer on the edge of our field, stood at full- alert and observed events in the woods that I could never see, and convinced bothersome dogs, with one look, that she would kick them from here to Hell’s parking lot if they didn’t back off. She had an uncanny sense of when to follow me around like a puppy and when to practice “social distancing.” She had spirit; she was a good one.

As the years progressed and riding became less important to both of us, I simply enjoyed watching her be a horse; grazing, scratching, rolling, prancing, and running with that beautiful gait of hers. Then, anxiety replaced enjoyment as I watched her chug-chug up the pasture hill like a three-pack-a-day pensioner who’d misplaced her glasses. (“Come on Shy Shy. Good girl, sweetie.”) I knew that the end was near when she balked at passing through eight-foot-wide gates, stepped reluctantly over the familiar ground as if she were on the ice, and occasionally got lost in her corral. (“Over here, honey bunny. It’s OK, come with me, pumpkin.”) Our gentle toughie could not overcome glaucoma, blindness, and the threat of serious injury. Enough.

Most of us know all too well the heart-rending difference between anticipating the inevitable and experiencing it. Although carefully planned and humanely carried out, the finality of Cheyenne’s end still shocks me. (She’s gone?) I miss the stuff of every day: our pleasant feed-time conversations, our routine hoof cleanings, fly sprayings, and brush-downs, and even my check-ins during brutally cold winter nights. She always greeted me with a whispered hrrr- hrrr-hrrr – as if she was expecting me and - thank you for asking - she was doing fine.

I have the usual regrets: I wish I’d spent more time with her; I wish I’d shown greater patience and kindness when dealing with her infirmities; I wish I’d more deeply appreciated what a fine, well-trained horse she was. There is an old saying, “If wishes were horses, beggars would ride,” and I understand the message that wishing alone doesn’t make it so. But I am reminded that wishes can open up a world of opportunities and that some do come true. For eleven years, I rode the smart, spirited, nimble-footed, little cowpony of my childhood dreams. On our last day together, already overcome with grief, I led Cheyenne into morning sunlight that she could no longer see.

She now rests in a far-field above our home.

Goodbye sweetie. If wishes are Heaven, we’ll meet again. Until then, we walk side-by-side in loving memory.