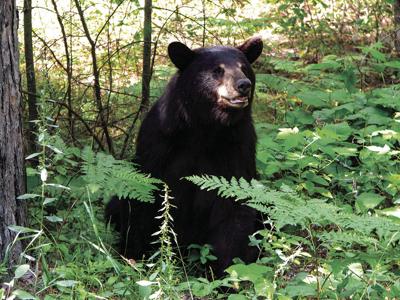 Vermont State Fish and Game Warden Sean Fowler approaches a languid black bear with its head wedged in an antique 10-gallon milk can.

Using his 18 years of experience as a game warden, paired with his past military ingenuity, Fowler assesses the situation. The bear must have been after something he smelled in the can. He’s lacking oxygen and tired. With his laced boot, Fowler nudges the bear to evaluate to what degree he can manipulate the bear free.

Fowler grabs the handles of the can; it’s not coming off. He decides to tie both handles to a tree pushing forth spring buds. Ropes taut, he pokes the bear in the chest, frustrating it backwards…until it rears forward, jamming the can into the ground, unexpectedly leveraging itself free.

A dazed glance at the prodding Warden and the bear trots off into the woods.

Fowler does not remove skunks under porches. He does not enjoy “playing referee” between deer hunters laying claim to hunt land belonging to a third party. Fowler does not have time to enjoy his own hunting.

Fowler regularly receives calls that begin with “I found a baby fill in the blank.” He has been called to remove a sickly, tick-ridden and blood-bare moose, and responded frankly to a woman who witnessed an eagle swoop down and take a baby loon: “You want me to do what?”

What does reflect the increase in the black bear population is how often Game Wardens like Fowler receive complaints about black bears. Fowler says he has at least one conversation per day about black bears, and he is often involved in encounters, especially during the springtime, post-hibernation.

“Changes in bear populations and activity are largely the result of a changing landscape…more habitat,” chief black bear biologist Forrest Hammond explains. In the 1840s, approximately 75 percent of land was cleared for the purpose of sheep farming. Today, that 75 percent is predominantly forested again.

Fowler follows Michele Porter to her small chicken coop behind her home in Worcester, the scene of a destructive black bear visit the night before.

“The bear came around back, tore off this window and grabbed a 50-pound bag of cracked corn,” Porter says as she motions to the new patchwork job of metal bed posts over the window frame.

“The bear will come back tonight. Set up a two-tiered electric fence, one line about here” – he motions to his shoulder height, above the crown of Porter’s head – “and one here, for the raccoons,” indicating shin height.

Porter points out that the neighbors don’t manage their trash properly. Fowler says he can speak with them and then reminds Porter of what’s in her control. “When you step outside, speak in a loud voice for 20 seconds, make noise,” he reminds Porter in his own carrying voice.

As an aside, Fowler explains, “Since you’re taking the proper precautions to protect your property, you may shoot the bear if you want, but you must either process it yourself or properly preserve the carcass and give it to someone who will.”

“No, I love animals too much to shoot a bear,” Porter states with conviction.

Back in his green truck – Fowler estimates that he logs about 30,000 miles annually – a pair of handcuffs swings from the cab handhold. “Most of the problems we have are not bear problems, they’re people problems. We as a society in Vermont need to learn how to live with bears,” Fowler states. This includes taking the proper precautions to “make living around people uncomfortable for bears.” Baited electric fence is one way. Proper management of compost, trash, and bird feeders eliminate easy access to “food.” Firecrackers are another.

The local listserv, “Front Porch Forum,” has become a popular venue by which neighbors and community members share concerns about black bear encounters. Aisha Cameron, of East Hardwick, clarified to her neighbor on the public forum that her modest evening firecracker shows were not to scare the horses next door, but to deter bears, per Fowler’s recommendation.

Laurel Stanley, of Danville, echoes Fowler’s sentiment about learning to coexist with bears. “We have moved into their territory, and we want them to exist, but they don’t understand that the limit is my yard…we have to be really conscientious about not socializing them.”

Jeremy Allaire has experienced first-hand how the concept of “my yard” does not translate to black bears. At Allaire’s home in Middlesex, Fowler watches a video of a black bear on Allaire’s deck from under the brim of his cap.

“I have two insurance claims on my truck for scratches from this bear climbing in the bed,” Allaire moans.

Fowler draws attention to the patterned ground indicating where the bear has repeatedly stepped to approach the home. He slips his thumbs into the arms of his bulletproof vest, “This is exactly the kind of bear behavior we do not want,” Fowler nods.

Now, Allaire has taken the proper precautions: his trash is now stored in the garage, he’s stopped feeding the birds year-round, and he’s installed a noise-making, motion-sensor surveillance system.

Black bear behavior is learned. The bear learns that there is a source of perceived food – like sunflower seed husks or even trash full of diapers – and returns.

Ashley Hetrick, of East Montpelier, recounted a story of a younger bear entering her garage to overturn and victimize a brood of baby chicks. Juliann Barney, of Peacham, admits that she knew she should have cleaned up the few scraps of honeycomb beside her front porch. After first visiting to clean up the comb, the black bear returned to damage and elope with her kitchen window bird feeders.

Since the State of Vermont has shifted from granting a bear tag to every hunter seeking a deer tag to charging $5 for a bear tag, the state has been able to collect more substantive data on black bears. In the six years following this change, the state has had the ability to track who has purchased tags for what region, while also mandating reporting of bear harvests. Hammond advocated for this change, which allows the agency to gather information about black bear population density and distribution as well as hunter success rate among a population of predominantly deer hunters.

Complaints and warnings reflect both deep concerns as well as confusion about black bear habits. Take in your bird feeders, many propose. You’re not an animal whisperer, others say. It’s the logging operation disturbing bears, some postulate. Logging – which opens up space for new forage like berry bushes – actually benefits black bears in the long term, Hammond explains.

Fowler feels that the increase in complaints reflects changes that made the reporting/complaint process more accessible in recent years. He adds, “The bears that are hunted and harvested are not the same nuisance bears that we get complaints about.” Hammond would argue that this is muddied by the fact that bear populations have spread to rurally dispersed lowland towns where more people live.

As the department plans to move forward with a new black bear management plan for 2019, Hammond explains that public forums will occur throughout the state to assess how citizens feel the bear population should shift – more bears, fewer, or the same? The current management plan set the target population at 6,000 black bears statewide. The department estimates there are over 7,000 presently. Hammond sees extending the hunting season as a potential solution to manage the growing population.

Fowler is, therefore, busy. With a neutral expression, he listens patiently to the folks who have been visited by a black bear. He validates. He explains. He moves on to the next. He gazes ahead at the remote gravel road he’s navigating. “People used to be a lot more self-sufficient than they are now, and these days it seems like people want to make a phone call and have someone else solve their problem for them…regardless of what that problem is, often.”

Black bears very much fall into that category.

Fowler brakes for a family of geese in the road.

“At the very least, nature continues to be nature.”