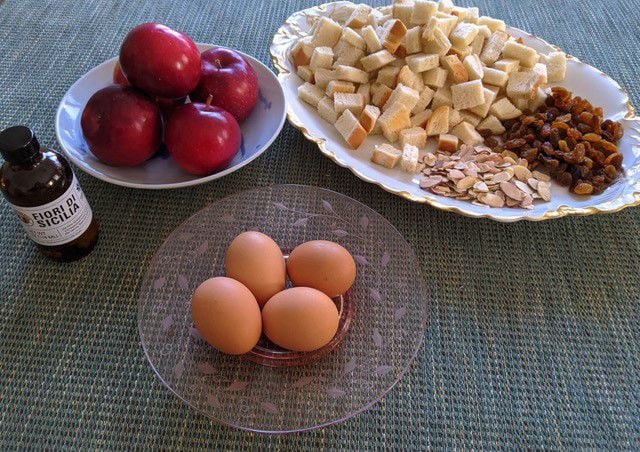 Like most self-respecting home cooks with a reputation to uphold, I overdo during the holidays. Case in point: there was no need to lightly toast and slice into astonishingly uniform small cubes three loaves of bread for the Thanksgiving stuffing. That was overkill. As much to save the bounty as to hide the evidence of my excess, I bundled up the unused cubes and stowed them in the freezer. And in putting them to good use since, I’ve decided keeping bread cubes on hand should become a regular practice.

What’s not to love about a ready supply of homemade breadcrumbs? Defrost what’s needed and grind in a food processor, or toss into a Ziplock bag and crush with a rolling pin. For a quick, classic “Cucina Povera” pasta dish, crush 2 or more cups worth of crumbs. Heat a large skillet over medium heat. Add the crumbs, then make a well in the middle. Add a small amount of oil and sauté crumbs, stirring constantly, until golden brown, light or dark as you like. Add some chopped fresh parsley and remove immediately to a plate. (Don’t leave in the skillet, my godmother insists, as even off the heat, they’ll continue to cook and can quickly scorch.)

Meanwhile, cook one pound of spaghetti to al dente and strain, reserving some of the cooking water. Season pasta with salt and pepper; moisten with a small amount of cooking water or additional olive oil if desired. Top with breadcrumbs and serve. For variation, add pine nuts to the crumbs while cooking, or sauté onion or garlic with olive oil in the skillet before adding the crumbs. Or “melt” anchovies into a few tablespoons of olive oil in a skillet set over medium heat and combine with the pasta and a little cooking water before topping with crumbs.

Make use of cubes for a quick Panzanella, an Italian tomato and bread salad served from north to south. Soak 2 or more cups of cubes briefly in a mix of water and good wine vinegar, then squeeze out excess completely. Add chopped ripe tomatoes, or halved cherry tomatoes, a bountiful amount of fresh basil, and thinly sliced red onion. Season with coarsely ground pepper and sea salt, and drizzle with extra virgin olive oil and additional vinegar to taste. Those are the essentials; add chopped cucumber, red or yellow pepper, anchovies, or fresh mozzarella “bocconcini” to suit. The root of Panzanella, a mix of stale bread and onions splashed with vinegar and oil, a dish of peasants and farmers, harkens to this old sentiment: it’s better to eat the simplest of meals in your own home with a hard-earned appetite, than to dine on more elegant fare away from family.

And then there’s bread pudding. Not perhaps a quintessential Sicilian treat, but something of a go-to dessert for me over the last few years. My mother would bake vats of the stuff when I was a kid; I recall the beat-up aluminum pan that stretched across nearly the entire bottom refrigerator shelf. She’d simply lay out slices of white bread like playing cards and cover it all with custard and a heavy dusting of cinnamon and bake until set. A little bland now, for my tastes, influenced as they have been by restaurant offerings laden with fruit or chocolate or both, and floating in pools of syrup or adorned with clouds of whipped cream. For home desserts, though, I prefer something in the middle: slightly sweet, slightly decadent. Here then are the flavors of Sicily captured in a familiar standby.

My experience with Fiori Di Sicilia is limited to King Arthur Flour’s heavenly version, which they describe and I attest is a “combination of citrus and vanilla with a pleasing floral aroma.” Other versions apparently fall more heavily into the floral. A mix of pure orange and vanilla extracts could substitute here.

Place 2/3 cup golden raisins in a bowl with 1 cup boiling water. Stir and set aside for 10 minutes for raisins to rehydrate.

Peel, core, and chop 4 to 5 apples. Sauté in 4 to 6 tablespoons butter over medium low heat until softened. If apples are not particularly sweet, stir in a quarter cup white or brown sugar. Cook for another minute or two to incorporate. Set aside and allow to cool.

Break 4 eggs into a large bowl and beat slightly with a whisk. Add 3 cups whole milk (or a mix of half-and-half with milk), up to 1 cup of sugar, and 1 to 2 teaspoons Fiori Di Sicilia. Whisk together. Add approximately 6 cups of cubed, hearty white bread, or Panettone of course, stale or slightly dried in the oven. Stir to combine. Set aside briefly to allow bread cubes to absorb some of the egg and milk mixture.

Strain the raisins well and discard the water. Add raisins to the mixture, along with the cooled apples. Mix well. Pour into prepared baking dish. Scatter the top with thin slices of butter. If you’d like a little crunch, top pudding with a half-cup or slightly more of chopped or sliced almonds and a little sugar. If the pudding browns too quickly during baking, cover loosely with aluminum foil.

Bake at 350 degrees for approximately 50 to 55 minutes, until top is turning golden and the pudding is set. A knife inserted near the center should emerge a little moist, not immaculate. For a more custard-like result, pudding may be baked in a water bath: Set the baking dish inside a larger pan – a roasting pan would work well here -- and add just enough boiling water to the pan to reach halfway up the side of the baking dish.

Remove from oven and run a knife around the edge, to help prevent pudding from sticking to the sides of the baking dish. Allow to cool before serving. Top with whipped cream if desired. Cover and keep refrigerated.