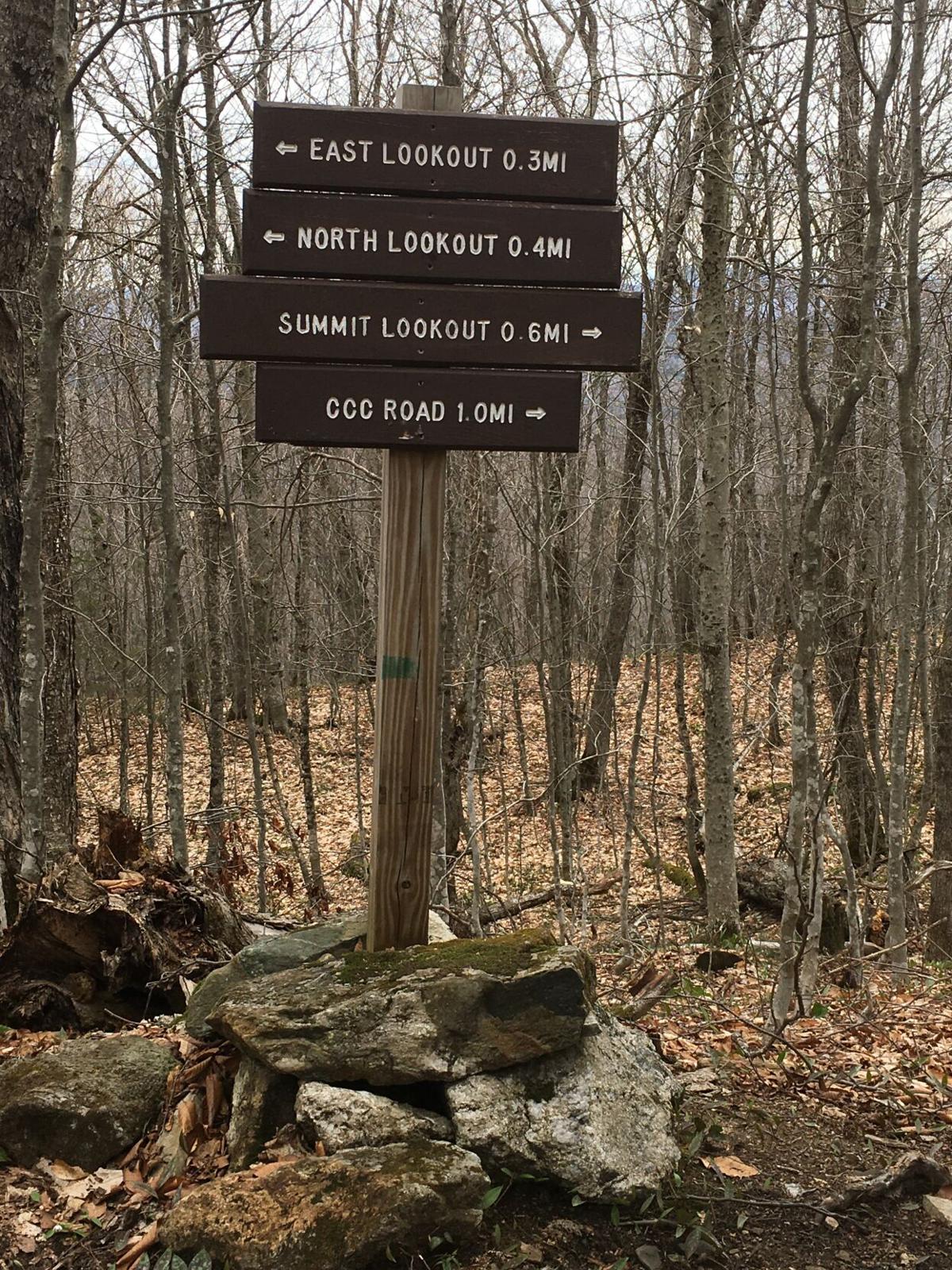 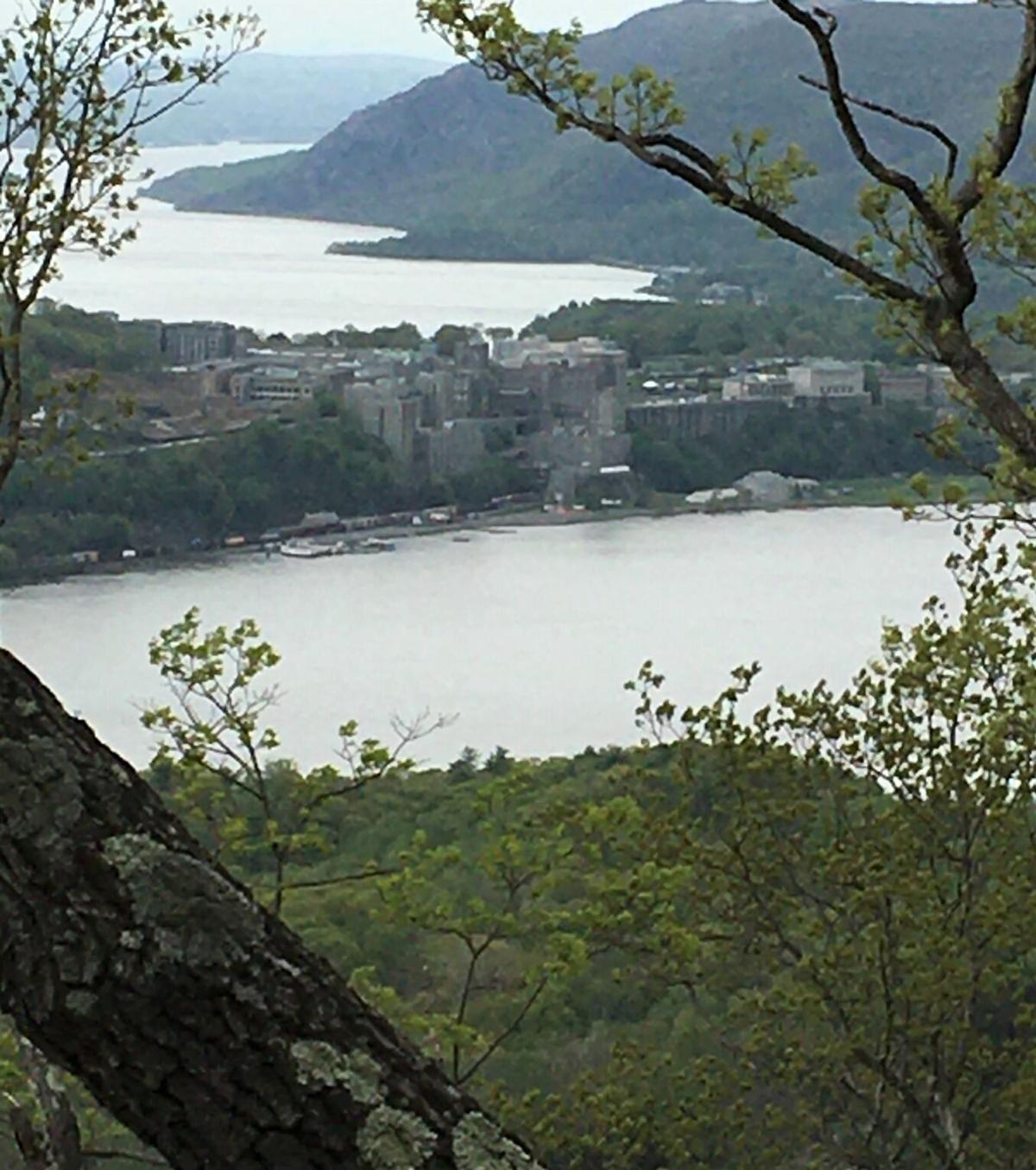 The ledge under foot and the scattered trees finding purchase in the cracks were reminiscent of the trails we love in Acadia National Park. But as we looked out at the view, instead of Mount Desert Island we were looking at the Hudson River, and in place of giant summer homes was a giant nuclear power plant.

It was early May and Betsy and I were hiking in the Hudson Highlands near Bear Mountain, just south of West Point. Trails back home were still too muddy so I proposed a visit to our daughter in Westchester County followed by a couple of days hiking. We booked an AirBnB near Peekskill that was within a mile of the Appalachian Trail (AT), which crosses the Hudson at the Bear Mountain Bridge. West of the bridge are the contiguous Harriman and Bear Mountain State Parks with many miles of trails. East of the bridge are Hudson Highlands and Clarence Fahnstock State Parks, containing the AT and some less charismatic side trails.

Our first day was Sunday and realizing that it was a nice spring day and we were within an hour’s drive of at least 20 million people, we chose to avoid the crowds and walk east of the river on a lesser known path. It led to a local prominence called Sugarloaf Hill, which turned out to be a pleasant knob overlooking the Hudson and looking up the river at West Point. Much of the walk was on old disused carriage roads, a legacy of the Castle Rock estate nearby. Flowering dogwoods and redbuds highlighted the green of new leaves. The hill looks across the Hudson at West Point and the United States Military Academy. I think of West Point as a green campus sort of place, but facing the Hudson is a gray concrete massif that looks like either a deeply urban streetscape or a heavily fortified defensive position. I suppose it is some of both.

The Hudson Highlands are the last barrier faced by the Hudson River in its imperative to reach the sea. The river squeezes through the narrows from West Point to Peekskill, exploiting a geologic fault and creating the perfect setting for a colonial fort regulating boat traffic up and down the Hudson. At West Point, Fort Clinton did just that during the revolution. There was even a Great Chain of massive iron links strung across the river to block British Ships.

On our second day we crossed the river to try the trails on Dunderberg Mountain. In my limited experience, trail signs are almost non-existent in southern New York. Luckily we had a good write-up that directed us to the highway pull-off that serves as a trailhead, and pointed us up the blue trail. In place of signs New York likes to use color coding of trail blazes. This was the trail overlooking the nuclear power plant. As it turned out, the plant was quiet with no plume of rising vapor, having ceased operation permanently on April 30. The railroad corridor that follows the river through the narrows was not quiet. One long freight train after another tooted along. The noise was rather annoying, but it reminded me that the Hudson corridor has been a vital passage for people and goods for millenia.

The Blue trail intermittently follows the bed of a railroad that never was. In 1889 the Dunderberg Spiral Railway was conceived to wind its way up the mountain to a hotel to be built on top. The train would then descend by gravity back down, reaching speeds of 50 mph! This mountain is steep and mostly exposed ledge, so the hubris necessary for such a scheme is off the charts.

We descended via the 1777 trail, which is yet another historic feature. It follows the route taken by a force of 2100 British soldiers on October 6, 1777 on their way to attack Forts Clinton and Montgomery. In places the trail had been widened with crude stone retaining walls. I was imagining those soldiers sweating their way up the mountainside in their heavy wool uniforms, probably pushing the odd cannon and having to widen the trail to get them through. All in all it was an interesting four mile hike, more an immersion in history than a wilderness experience.

Just three days later, back in the good old NEK, I drove north to Mt. Hor. My purpose was to do my annual maintenance on the trails there. I started up the Herbert Hawkes Trail with my mini-shovel, loppers and axe in my pack. The signage at the trailhead is informative with trail name, mileage, and even a kiosk with a map. The trail works its way up through rich northern hardwoods, so different from the scrubby oak and ledge of the Hudson Highlands. Stopping to listen, there was no train whistle, only the fluting of a hermit thrush.

In the 1930s the Mt. Hor environs were a busy place. CCC Camp 55 was just down the hill (see Sylvia Dodge’s 2018 article in the North Star) and you would have heard the shouts, cursing and laughter of crews of young men building roads and trails. From the valley where Route 5 finds its way to Barton, the train tracks would have been very busy, with trains carrying both passengers and freight passing frequently, well within ear-shot.

Up on the summit ridge of Mt. Hor I pulled out my axe to cut through a beech tree that had blown down. The sound of my axe blows rang through the woods, arguably the loudest thing the creatures would hear that day. Making my way up to the southern outlook I looked across at the wind farm on Sheffield Heights, its long blades turning with deceptive laziness, producing power in such a different way than the Indian Point Nuclear Power facility.

At each trail junction on Mt. Hor, signs point the way. At the east outlook I took in the dizzying drop to Lake Willoughby and the drama of the cliffs of Mt. Pisgah across the lake. The ski trails of Burke Mountain were still white, as were the White Mountain peaks in the distance. At the north outlook I gazed at Owls Head, Lake Memphramagog, and the Quebec mountains beyond. The working landscape of the Northeast Kingdom is not wilderness but compared to the southern Hudson River valley it’s pretty quiet. I enjoyed the history of that busy natural corridor through the broken ledges of the Hudson Highlanes, but sitting on a ledge on Mt. Hor listening to the wind and thrushes while gazing east at the White Mountains or west at the Green Mountains, I was absolutely sure that I was on the right trail.