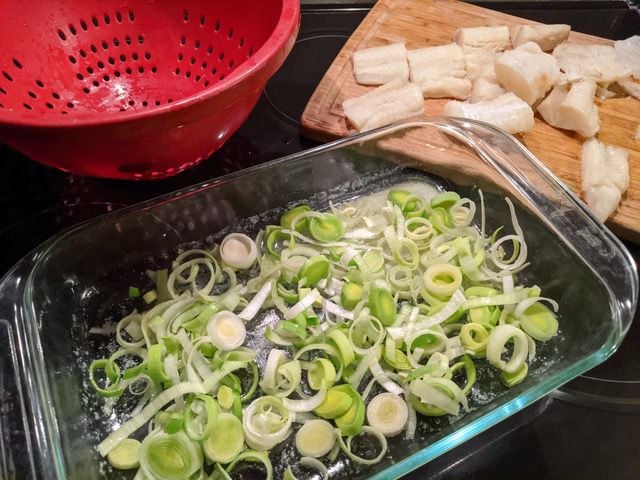 One might think access to all the fishes of the Delaware and Chesapeake Bays, the Atlantic Ocean, and the pristine lakes and rivers of rural Sussex County might have enticed my mother to branch out beyond frozen flounder.

With rare exception – notably that sea monster she and my father carved up on the kitchen floor, wrapped in freezer paper, and served once before tossing out the tonnage as inedible – it did not.

Shellfish filled in the menu gaps. Oyster stew appeared more often than I liked, but shrimp and crab took center stage with some regularity. The crab, in lightly seasoned and utterly perfect cakes and imperials; and shrimp, butterflied and fried golden brown, or quickly boiled and served with cocktail sauce my mother doctored with additional horseradish. But fish was flounder, and I’ve never truly acquired a taste for anything bolder, despite the many glimpses beyond.

One summer as a teen I spent a week, if memory serves, on the Broadkill with family friends. Fresh trout topped with thick slices of sweet onion, wrapped in foil and baked or grilled was a genuine revelation. So was deep-fried red snapper from a roadside stand in Puerto Rico, monkfish with butter while vacationing in Florida, and Swordfish alla Ghiotta in Palermo. But my default setting on preparing fish at home remains, sadly, “I’d rather not.” It’s a failing. I’m working on it.

Which brings us to salt cod, baccalà. It never once appeared on our dining room table growing up, and neither several dozen Italian cookbooks nor six seasons of The Sopranos had tempted me. But after years of passing up the small wooden boxes sitting patiently next to canned crab and smoked trout in the refrigerated grocery display case, it seemed time to give it a try.

There are as many ways to prepare salt cod as days in the year, according to a Portuguese chef a friend referred to me. For this first effort, I wanted to stay within my mild, familiar comfort zone, eschewing tomatoes, olives, and capers that flavor many Sicilian recipes. And I used salted butter rather than olive oil in this preparation. I won’t claim this dish made me a baccalà believer, but I do plan to try again – pan-fried with an egg and flour batter. Which, come to think of it, is how my mother prepared that frozen flounder.

Baccalà with Potatoes, Leeks, and Wine

You’ll need to soak the salt cod before preparation. The package I purchased came with no guidance. In case you find yourself in the same boat (so to speak): Rinse the fish well and place in a large glass or ceramic dish that is deep enough to keep the fish completely submerged. Cover with cold water, cover the dish and refrigerate. Recipes encourage soaking the fish from one to three days; I opted for two, changing the water several times each day. This worked well; at the end of just over 48 hours, no smell of salt remained. In fact, I salted my own serving at the table.

Preheat oven to 350 degrees. First, roast the potatoes. Peel 4 to 5 large yellow potatoes. Slice into thick coins or chop into cubes. Place 3 to 4 tablespoons of butter or olive oil in a roasting pan or glass casserole large enough to hold the potatoes in a single layer. Place the pan in the preheated oven for 3 to 5 minutes, enough to melt the butter or heat the oil. Remove from the oven and add the potatoes, season lightly with salt and pepper, toss to coat, and return to the oven.

Slice off the root end of three leeks and discard. Slice the white and into the green (as much as you like, or as seems tender) into ¼-inch slices. Place in a colander and rinse thoroughly. Set aside. Remove the pre-soaked fish from the water and rinse once more. Remove any skin or bones. Cut into pieces of roughly 2 to 3 inches wide. Discard pieces that are overly thin or stringy.

In a second roasting pan or large glass casserole, place 2 to 4 more tablespoons of butter or olive oil. Place in the oven for a few minutes, until butter is melted or oil is hot. Remove from the oven and add the leeks. Season with salt and pepper and toss slightly. Layer on the pieces of fish. Sprinkle with ½ cup or more of white wine, or a few tablespoons of lemon juice if you’d rather (or melted butter if you’re really unsure about salt cod). Season with pepper to taste. Consider a sprinkling of crushed red pepper flakes for a little heat.

When the potatoes have roasted for 15 to 20 minutes, remove from the oven, give them a stir, then return. Then place the pan with the fish in the oven and bake an additional 30 minutes or so, depending on the thickness of the fish, until the fish is cooked through and falls apart rather readily. The potatoes should be appealingly golden brown by then. If during baking they seem to be crisping up too much, cover with foil.

For an attractive, somewhat traditional presentation, place potatoes on a large, warm platter and arrange the leeks and fish on top. Snip a little fresh parsley overall for color, if desired. Some recipes call for black olives. Serve at once.